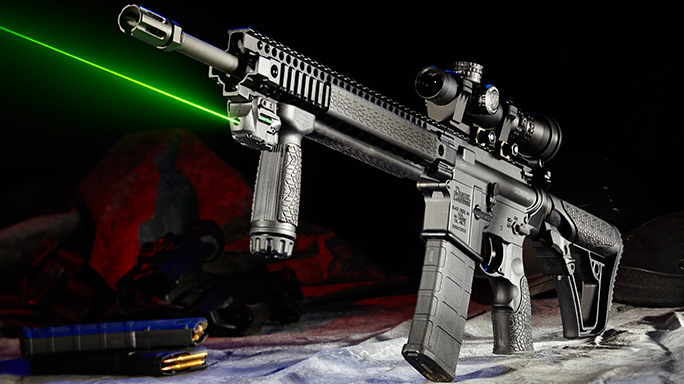 1 of 5
Gun Test: Daniel Defense’s Lightweight DDM4V5LW
The DDM4 quad-rail handguard makes it easy to attach lights and lasers, such as the LaserMax Genesis (shown). 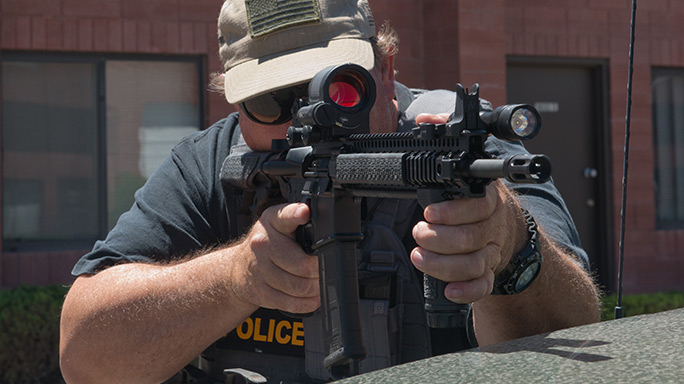 2 of 5
Gun Test: Daniel Defense’s Lightweight DDM4V5LW
With a Trijicon SRS sight, a SureFire Scout light and Daniel Defense fixed sights, the AR was ready for the range. 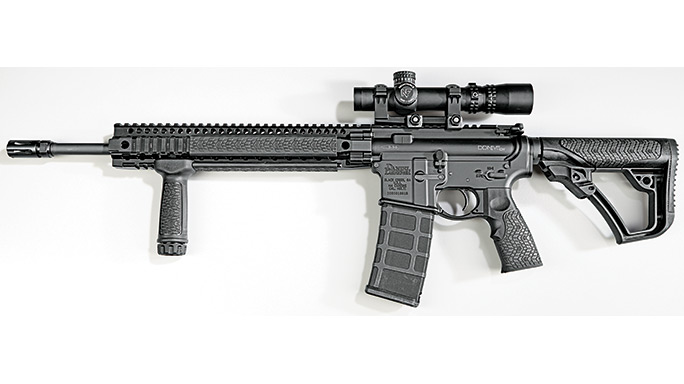 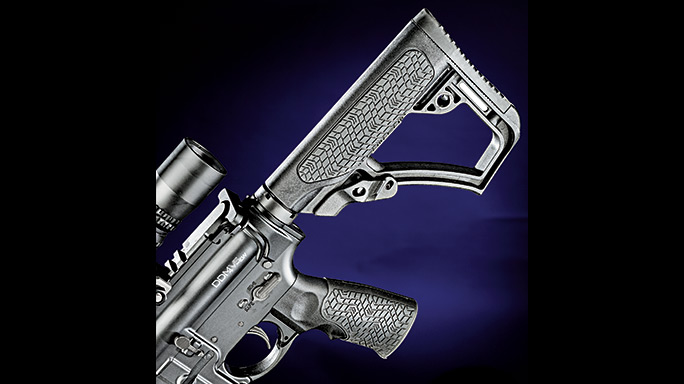 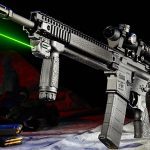 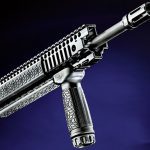 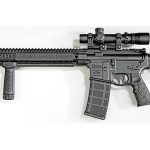 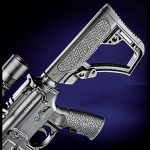 Working as a patrol sergeant shortly after the now-infamous Los Angeles bank robbery, I was charged with putting together a “rifle program.” To me, that meant providing rifles to patrol officers—the real solution.

Unfortunately, to my administration that meant a small number issued to patrol sergeants. That kind of idiocy was common at the time; there were even SWAT teams with “armory rifles.” You responded to the call and waited for the “gun truck” to show up with your weapon. Fortunately for all concerned, that foolishness eventually disappeared. After more nagging, “personal carry” was finally allowed—officers could provide their own rifles. Sergeants’ rifles were given to instructors who worked the street and provided training. It took another 10-plus years for administrators who understood the need for patrol rifles, and I was once again asked to find the best weapon for issue to everyone.

For patrol purposes, reliability is paramount, along with a proven track record and weight. Heavy barrels may improve a rifle’s inherent accuracy, but not enough to make them required in a typical police environment. What we needed was a simple, lightweight AR that was very well received. If I were to equip officers today, I would still recommend a reliable and rugged carbine with a lightweight 16-inch barrel, and Daniel Defense has recently introduced one of the best—the DDM4V5LW in 5.56mm NATO.

Ask working professionals which AR to buy for duty use and the name Daniel Defense will surely come up. Proving themselves in the hands of law enforcement and military operators, the company’s rifles are reliable, durable, simple and cost effective. I’ve tested dozens of ARs, and Daniel Defense rifles always work right out of the box. Using them consistently both with and without a suppressor, they just seem to work. These guns are built with extreme attention to detail using parts that meet or exceed military specifications. For the ultimate in rugged weapons, Daniel Defense installs pinned gas blocks, solidly mounted handguards and magnetic-particle (MP) inspected internals. The company’s barrels are among the best on the market, and they are often seen in other manufacturers’ rifles.

If the need arises for a direct-impingement rifle that must work every time it is called upon, Daniel Defense is at the top of my list. I was recently considering a simple, lightweight patrol rifle for personal use, and testing the DDM4V5LW proved to be a case of perfect timing.

The barrel has a lightweight profile with a 1-in-7-inch twist rate. It’s also chrome lined, MP tested and coated in a durable heavy phosphate finish. The barrel sports 1/2×28 threading and comes capped with a stainless steel Daniel Defense flash suppressor.

The mid-length gas system utilizes a 4140 hardened steel gas block that is pinned for rugged reliability. Surrounding the barrel and gas system is a 12-inch-long, free-floating DDM4 handguard that is CNC-machined from 6061-T6 aluminum. It’s lightweight while offering plenty of Picatinny rails for attaching accessories. Daniel Defense also ships the rifle with Santoprene rail panels that are heat resistant up to 300 degrees, keeping you in control under hard and fast use.

The lower receiver includes a flared magazine well and a rear quick-detach (QD) sling swivel attachment as well as a mil-spec trigger and internals. The company’s collapsible stock, which features Soft Touch overmolding, is installed on a mil-spec buffer tube housing an H-buffer, and Daniel Defense also includes its matching pistol grip. Finally, the lower has an enlarged triggerguard for those wearing gloves.

The DDM4V5LW arrived in a hard case with one 30-round Magpul PMAG and a Soft Touch overmolded vertical foregrip as well as Daniel Defense’s optional fixed front and rear sights.

To test the carbine at the range, I added Trijicon’s SRS (Sealed Reflex Sight), which is one of my favorites for patrol or duty use when I need a red-dot sight. Solid as a rock, its design all but eliminates the tunneling effect common on other sights. The SRS is quick to install and adjusts easily without special tools. It features a 1.75-MOA dot, making it useful at any practical range. The SRS is powered by a solar cell (as well as a backup AA battery) with 10 brightness settings, three of which are night-vision compatible. With its incredibly clear glass, the SRS is fast, easy to use and well suited to any duty application.

Since patrol weapons need a light, I added my SureFire Scout light in a LaRue Tactical offset mount, and I added a momentary/constant-on push button to the vertical foregrip for activation.

This rifle can serve well for a bunch of missions, but its real sweet spot is as a patrol rifle. In the law enforcement world, ranges are seldom beyond 75 yards and round counts are low. Officers need lightweight rifles that work every single time. Most are kept simple, with a red-dot sight or optic, backup iron sights and a light. I tested the DDM4V5LW in this manner, and it seems perfect for patrol uses.

Officers get to calls in a car, so being able to operate in and around a vehicle is critical. I keep a rack in the back seat of my FJ Cruiser as well as a locked container in the rear, and for testing, I deployed the DDM4V5LW from both locations. The gun was very easy to access and get into action. I also ran the carbine through my range’s shoothouse, where its lightweight handling characteristics really shined. It worked well around corners and in tight spaces. Keeping the stock collapsed meant I could easily bring the carbine up to my shoulder and on target. Moving around the range and shooting from various positions, the DDM4V5LW was a joy to use. It easily fit into a bag and, again, was very easy to deploy.

Holding the rifle in the shoulder pocket while moving, the lightweight barrel was really nice. Daniel Defense’s Santopene rail covers are also very comfortable. Even during rapid fire and hard use, the covers stayed cool to the touch. The covers also provided a solid grip—there was no slipping. The overmolding on the stock and pistol grip also provided plenty of traction.

The DDM4V5LW’s accuracy was excellent, with my best group using Winchester’s 69-grain Match ammo measuring just under an inch. Rapid-fire groups at 50 and 100 yards consistently yielded fist-sized groups of 10 rounds or more. There did not seem to be any real difference in impacts given heat when tested at reasonable ranges. Engaging steel at 200 and 300 yards, hits were consistent. When I ran three reasonably fast 10-shot groups at 200 yards, I only had two misses. Moving to 300 yards, the results were similar, with only two misses per 10-round, rapid-fire group—not bad for shooting off-hand with a red-dot sight.

I ran several types of ammunition through the gun, including 40-grain frangible rounds, and the DDM4V5LW never missed a beat. As this carbine shows, Daniel Defense builds its rifles to work right out of the box in harsh real-world conditions using the widest range of ammunition.

Overall, this is a fantastic rifle, so much so that I ordered one for my personal collection. In training courses and media events, I often need a simple direct-impingement AR that works all the time, and the DDM4V5LW does that at a reasonable cost. Lastly, age, experience and hours on the range mean just about everything today I deploy is lighter, and the DDM4V5LW carbine fits that to a T! 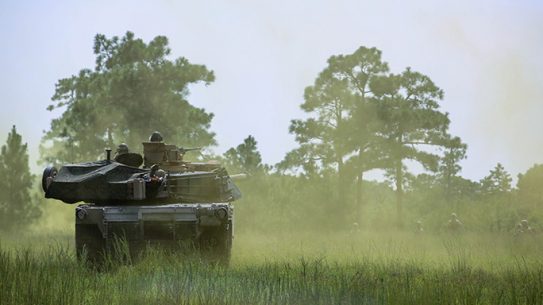 Marines with 2nd Tank Battalion get in their field work during an exercise at...