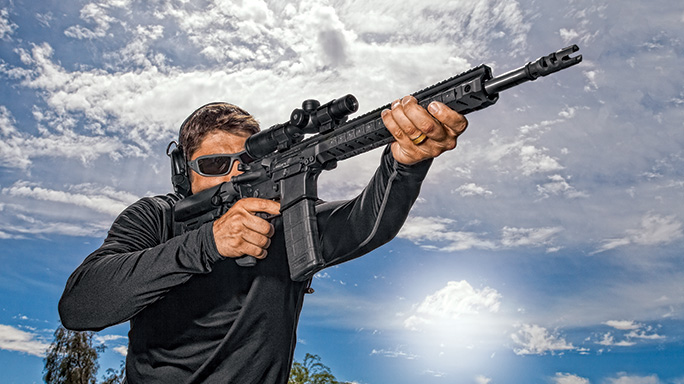 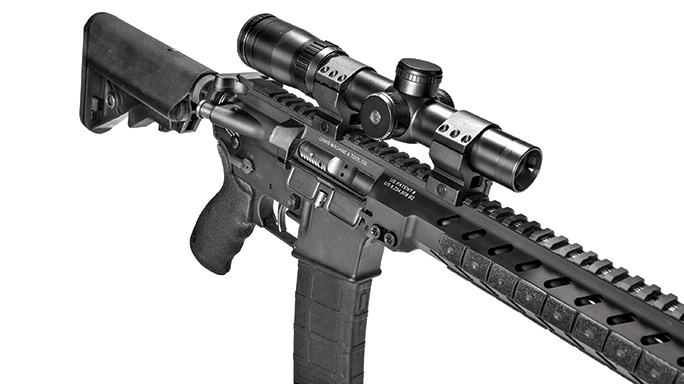 2 of 4
Photo by STRAIGHT 8
Testfire: Lewis Machine & Tool’s SLK8 Rifle
The monolithic upper’s full-length, uninterruped top rail provides plenty of space for mounting sights and optics. While the handguard is slim, LMT installs a heat sink to prevent it from getting too hot during rapid-fire strings. 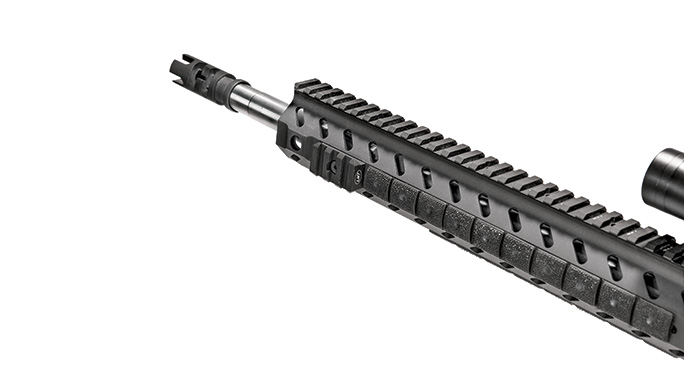 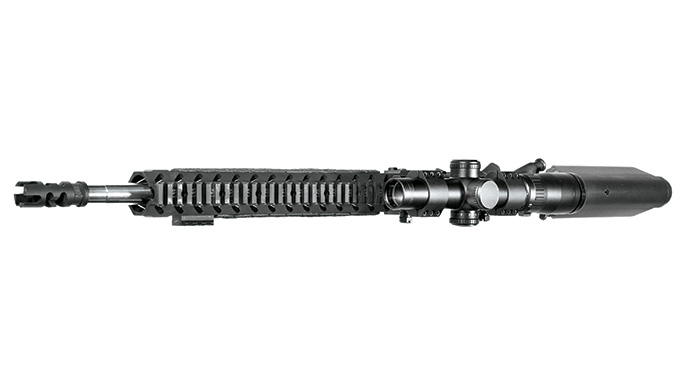 4 of 4
Photo by STRAIGHT 8
Testfire: Lewis Machine & Tool’s SLK8 Rifle
The long top rail has T-markings that make it easy to remove and reinstall optics without losing your zero. Rail sections can be added to the handguard’s sides and bottom as needed. 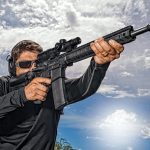 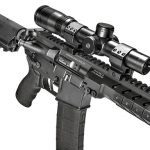 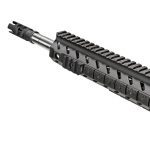 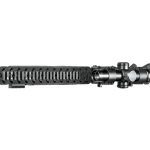 Today’s AR-platform rifles are just as versatile, with owners swapping out entire upper receivers to change calibers in little more time than it takes to read this sentence. All it takes is a few seconds to punch a couple of pins out to swap out upper receivers. Today, Picatinny rails make it easy to change out optics, too, and the abundance of aftermarket parts allows for personalization and specialization, another boon that makes the AR so likable.

Over the last few years, the U.S. military has pushed for upgrades to the AR platform to extend its length of service and fit other roles. This has made it attractive for firearms manufacturers to invest in improving the basic design, with a big government contract as its prize. One manufacturer, Lewis Machine & Tool (LMT), set out on a path that improved the AR design by creating a monolithic upper receiver with an integral forend. This design idea won LMT a patent. Going a step further, LMT combined a simple quick-change barrel capability into its monolithic receiver that’s as simple as removing two large screws and replacing them once the barrel swap is accomplished.

Many manufacturers have been moving away from bulky quad-rail handguards lately, and LMT’s latest model, the SLK8, has a 13-inch forend with a full-length top rail while the sides and bottom are left smooth. Users can add rail sections where desired.

One of the areas where the SLK8 will shine is in 3-Gun competition and other shooting matches that require firing off-hand and variable support situations. I have watched several competitive shooters, and the manner in which they grip an AR while shooting is rather varied. One thing that I have noticed is that they often extend their support hand as far as possible along the forend. The SLK8’s longer handguard offers more length to position the hand and also gives more options for resting the weapon for a steady shot. This longer handguard doesn’t matter much if you only shoot from a bench or plink off-hand, but it comes in real handy if you need to find a solid rest quickly, like shooting around a barricade. Keeping the barrel off a solid object is important; otherwise you’ll affect your precision.

The SLK8’s new forend is just 1.5 inches wide, which fits my hands well. One downside to smaller handguards is that they typically heat up quickly if you you run through a couple of magazines in a short period of time. The SLK8 addresses this issue, however, by having a heat sink in the area where the two screws hold the barrel in place. After three or four magazines dumps, the handguard remains cool enough to hold.

The SLK8 is built specifically to be lightweight, maneuverable and durable enough to handle the rigors of a 3-Gun competition. A long, slick rifle chambered in 5.56mm NATO, the SLK8 I received for testing came with a 16-inch, Ultra Match stainless steel barrel with 1-in-7.5-inch-twist 5R rifling. LMT also offers the SLK8 with other barrel options. The upper receiver also features a tactical charging handle. Inside, you’ll find a semi-auto bolt carrier group.

This rifle’s upper is mated with an LMT Defender lower receiver with a SOPMOD buttstock, a two-stage match trigger and an Ergo grip designed exclusively for LMT. The safety and magazine release are both ambidextrous. The SLK8 ships with a sling, an operator’s manual, one 30-round magazine, a calibrated torque wrench, four rail segments, six rubberized grip panels and two heavy-duty, push-button swivels.

To run the SLK8 through its paces, I tested five different factory loads. My course of fire consisted of shooting five 5-shot groups at 100 yards. Throughout the day, temperatures ranged from the mid-60s to the high 70s, with gusts creating a 14-mph crosswind. To test the rifle’s accuracy, I mounted a Trijicon 5-20x50mm AccuPoint scope.

After testing the accuracy for all of the loads, I switched to a Trijicon 4X ACOG and fired an additional 10 rounds with each load to measure their velocities. I fired an additional 150 rounds off-hand at steel targets at varying ranges. In all, I sent more than 350 rounds downrange during this evaluation without a single hiccup.

The first load I tested was Hornady’s 55-grain TAP. The velocity averaged 2,820 fps, with an extreme spread of 75 fps. Five-shot groups averaged 1.34 inches, and the tightest was 0.58 inches. Hornady’s 75-grain Match BTHP load averaged 1.26 inches for five groups, with the smallest group measuring 1.04 inches. The average velocity was 2,528 fps, and the extreme spread was 104 fps.

Federal’s American Eagle 62-grain FMJ boat-tail load averaged 1.84 inches, with the tightest group measuring 1.68 inches. This load was one of the more consistent in regards to speed, with an extreme spread of 66 fps. Its average velocity was 2,880 fps. Next up was Federal’s 69-grain Gold Medal Match load featuring Sierra MatchKing bullets, which averaged 2,730 fps and showed an extreme velocity spread of 56 fps. This load averaged 1.27 inches, with the smallest group measuring 1.19 inches.

LMT’s rifles are easy to clean owing to their simple disassembly for maintenance. The quick-change barrel system also makes it easy for shooters to quickly swap between .204 Ruger, 5.56mm NATO, 300 BLK and 6.8 SPC chamberings. LMT rifles have developed a reputation for innovation and precision, and the SLK8 continues that tradition with a model that should prove successful in 3-Gun competitions. 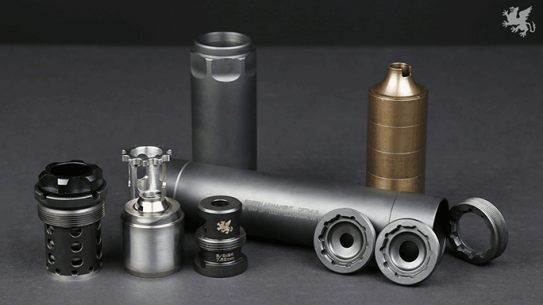