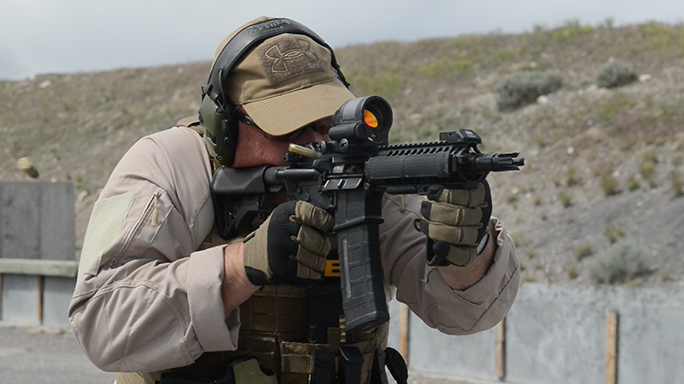 1 of 3
Gun Test: LWRC’s Six8 UCIW Rifle
At the range, the Six8 UCIW ran flawlessly with every load, and LWRC’s folding foregrip helped the author control the short carbine. 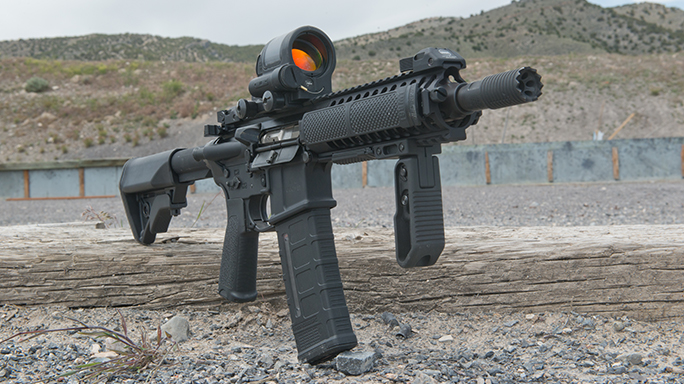 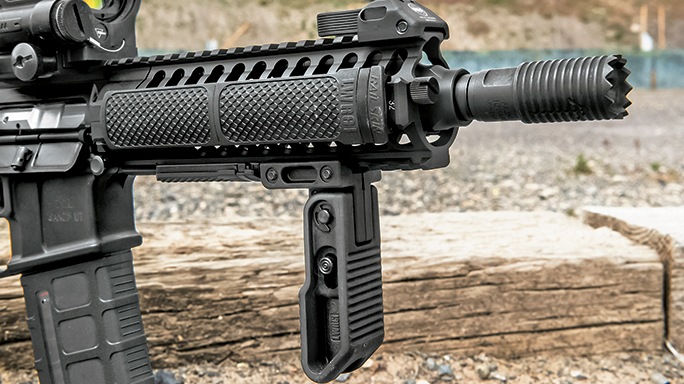 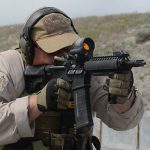 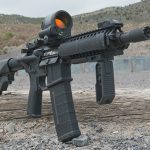 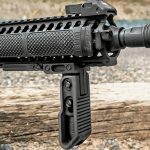 If you gather several experts to discuss whether short-barreled ARs are advantageous for police work, the opinions will be diverse, if not contentious.

It’s one of those long-standing debates that will never go away. Both sides can be rather entrenched, but mostly as to the “need”—not necessarily the advantages. Anyone having run a truly short-barreled rifle (SBR) on an entry team will attest to how light, handy and quick they are. Patrol officers able to mount rifles in their cars swear by them. Space is very limited these days in patrol cars with computers, printers and other electronics, so personal-defense weapons (PDWs) are helpful. They
easily fit in smaller bags and cases, too, making trunk storage better. And since most LE engagement distances are across the room, or occasionally across the street, SBRs are powerful enough to get the job done in most cases. Modern ammunition makes that possible even with the 5.56mm, but SBRs still come with a few issues.

Fire a sub-10-inch-barreled AR in close proximity and you’ll notice the first issue immediately—they are loud! And the muzzle blast is pretty significant. Flash suppressors help in this regard, but SBRs can still be problematic in close quarters. Reliability is also a concern, although various piston systems make that a non-issue in many cases—even when using sound suppressors. Lastly, they compromise terminal ballistics, sometimes significantly depending on the ammunition. Modern bullets and manufacturing help, but for some the solution is to move up in caliber. While the 300 BLK is gaining in popularity, it was the 6.8 SPC that made the leap first. Success with different designs has been varied, with magazine limitations being the biggest issue. Enter LWRC International and its Six8 platform, which is built specifically for the 6.8 SPC cartridge.

Although the 6.8 SPC remains popular among a few U.S. military units and some hunters, it truly thrives in the Middle East’s tactical world. It was this strong desire to abandon the 5.56mm in Saudi Arabia that prompted the Six8 project. That country’s operational environment is anything but conducive to a rifle’s reliability, making magazine issues a deal breaker. LWRC decided to start over and build a rifle just for this caliber. Given the proven reliability of Magpul’s PMAGs, LWRC began there. Magpul designed a PMAG around the 6.8 SPC to ensure reliable feeding and operation with a standard 30-round capacity. LWRC then designed a receiver set around the magazine. The result is the Six8, and it has proven to be incredibly reliable and well suited to any operational environment.

I recently got my hands on the Six8 UCIW, or Ultra-Compact Individual Weapon, variant. Utilizing an 8.5-inch, 1-in-10-inch twist barrel and 6.8 SPC II chamber, the UCIW is the shortest Six8 carbine LWRC builds. The barrel features 5/8×24 threading and comes equipped with a proprietary four-prong flash suppressor.

The handguard, a shortened version of the A2’s quad rail, sports four rails along with rail covers when you don’t need to add accessories. The top of the handguard can also be removed easily to access the gas piston system. Mounted to the bottom rail is an LWRC vertical foregrip. My test carbine came with LWRC’s flip-up Skirmish front and rear sights.

The Six8 UCIW’s ambidextrous charging handle controls one of the strongest bolt carrier groups in the industry. Built from one piece, the bolt carrier is strong yet light and comes with the company’s firing pin and piston return spring. Six8 bolts are machined from a super alloy designed to take extreme loads, then they are plated for increased strength and lower friction. As mentioned, the Six8 UCIW utilizes Magpul PMAGs that are purpose built for the cartridge. The magazine’s curve, width and length are designed around 6.8 SPC specifications.

Each Six8 lower starts with an LWRC forging, one of the strongest in the industry. An ambidextrous bolt stop and magazine release are built into the design along with a flared magazine well. My test carbine’s lower also sported a Troy Industries ambidextrous safety, a Geissele two-stage combat trigger and extended pushpins from Battle Arms Development. BCM’s Gunfighter pistol grip was also installed. The Six8 UCIW’s proprietary short tube, buffer, spring and stock make it easy to use in close quarters, especially when wearing plate carriers. This helps bring the entire carbine’s overall length to a mere 24 inches with the stock collapsed.

Since I wanted to focus on testing the Six8 UCIW in close quarters, I mounted a Trijicon SRS sight as well as a Troy Industries Claymore muzzle brake. While the Six8 platform is known for being reliable, these guns are still loud, and this seemed the perfect chance to test out a newer muzzle brake. Designed to send all the blast forward, the Claymore is perfect for short guns.

Using a rifle in a police environment often means close quarters—not only for you, but also your partner. Entry team members may be very close during a fight, so increased muzzle blast can be a real problem. Short rifles are by far the biggest offenders; they’re capable of removing the guy next to you from the fight. Add the increased pressure of the 6.8 SPC and it can be worse, and this rifle proved no exception. It was loud, and I could feel the extra pressure, especially in rapid fire.

This is where the Claymore muzzle brake comes in. Sure, the gun is still loud with it installed, but all of the blast is pushed forward, making it survivable in close proximity and almost pleasant as the shooter. It was most valuable when shooting next to walls and barricades. Several similar designs exist these days, but this test has proven the value of a good muzzle brake to me on entry rifles with short barrels when sound suppressors are not in the cards.

Testing the LWRC Six8 UCIW was almost boring in terms of reliability. Even some modern piston-driven guns can sometimes be finicky about their ammunition, especially in 6.8 SPC. But I threw everything in my rather substantial inventory at the Six8 UCIW, and it ran without a hitch. Brass ejection patterns changed on occasion, but every load worked, including some old Silver State Armory 90-grain Bonded rounds that often cause problems in other rifles. The carbine seemed to prefer the 90-grain Federal Gold Dot and Silver State Armory Bonded loads. The velocities were nearly identical, (Please turn to page 92)

the recoil manageable, blast minimal and accuracy excellent. The 90-grain Federal Gold Dot load is notable because it’s plentiful and cost effective—they load it by the ton for a couple of contracts in the Middle East. It’s a pretty hot load, too, as it still made 2,500 fps out of this 8.5-inch barrel, an impressive feat.

The Six8 UCIW’s accuracy was excellent, with the Federal Gold Dot taking the day with a group in the 1.25-inch range at 100 yards. Setting up at 25 yards on a barricade, the Six8 UCIW put 10 rounds into what amounted to a large hole. This is just about perfect for a real-world police engagement. As a bonus, that bullet has proven to be an excellent performer in gelatin. The math says it should not be the case, but real-world testing seems to prove otherwise. The Silver State Armory Bonded load was a close second in the accuracy department.

When it comes to running and gunning, this thing was a joy. Not only was the short barrel handy when moving around, but the stock was also just about perfect for me, plate carrier or not. When I extended the stock a couple of notches, the carbine fit me well in conjunction with my plate carrier. I didn’t have to change my stance when firing. Throwing on a gas mask, the Trijicon SRS lined up every time with the stock locked into my shoulder. Dropping to prone, I could extend the stock far enough for a solid purchase. It even worked to place the stock square in the center of my plate, a technique used by some when lasers and night vision are the primary sighting system. In short, the Six8 UCIW was one of the most comfortable ARs I’ve used in full kit in a long time.

This rifle was a true joy to shoot fully kitted up. So much fun in fact that I ran out of ammunition during the testing, and I haven’t done that in a while. The recoil was noticeable but manageable compared to a 5.56mm of similar build. The accuracy was excellent, the carbine ran flawlessly, and even after several hundred rounds (closer to 1,000), the bolt remained mostly clean. Working in and around my truck, using barricades and in a shoothouse, the Six8 UCIW was about as quick and handy as it gets. The short stock fit me perfectly in full kit. Loaded with 90-grain bonded bullets at 2,500 fps, you certainly won’t be under-gunned. If you are in the market for a short-barreled AR packing some punch, make sure you put LWRC’s Six8 UCIW on your list. 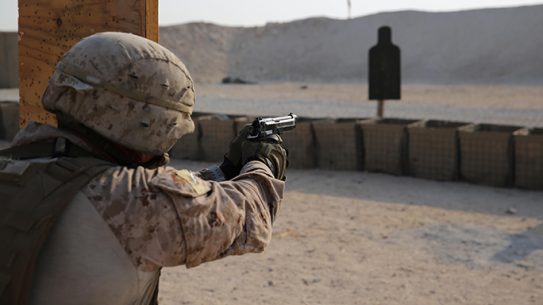 SPMAGTF-CR-CC Marines with Marine Wing Support Squadron 371 hit the range from training while...