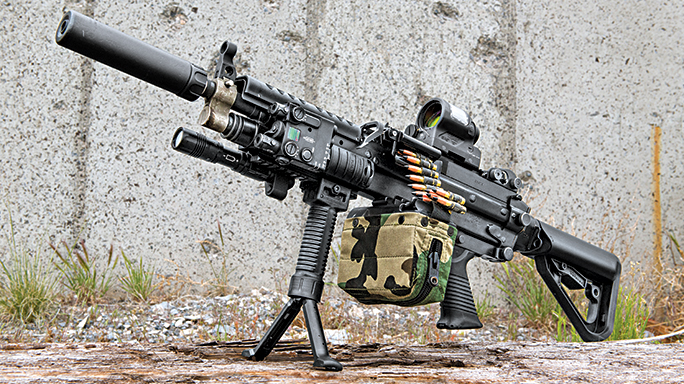 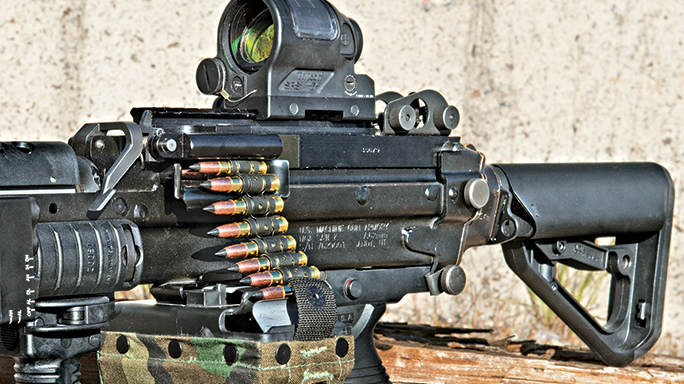 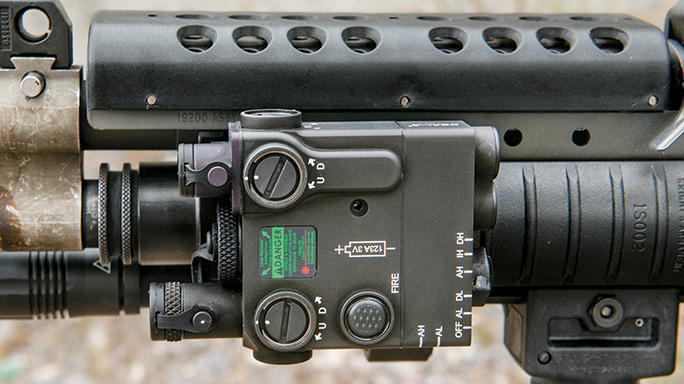 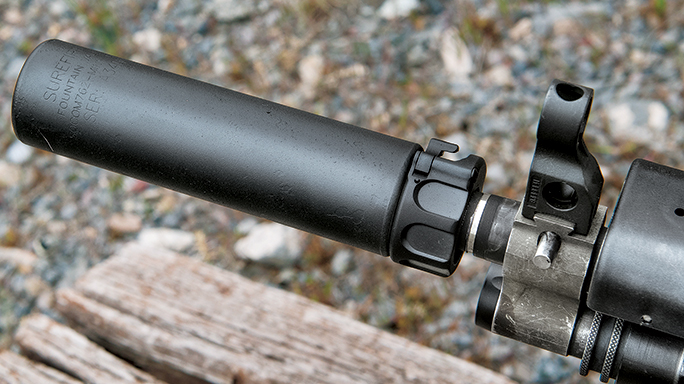 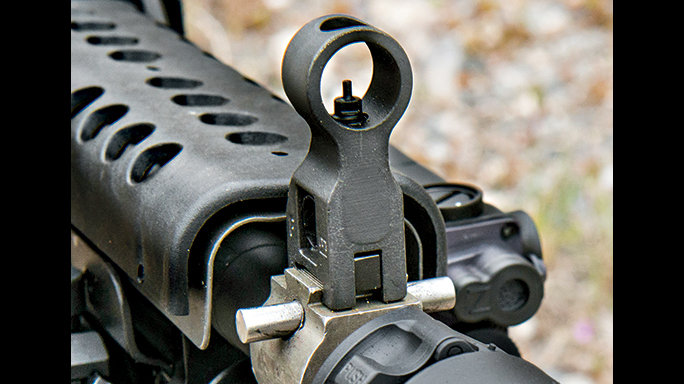 5 of 6
Gun Test: Machine Gun Armory’s 300 Blackout SAW K
The gun comes with a hooded front sight, but MGA can also replace this with a rail for mounting your preferred sight. 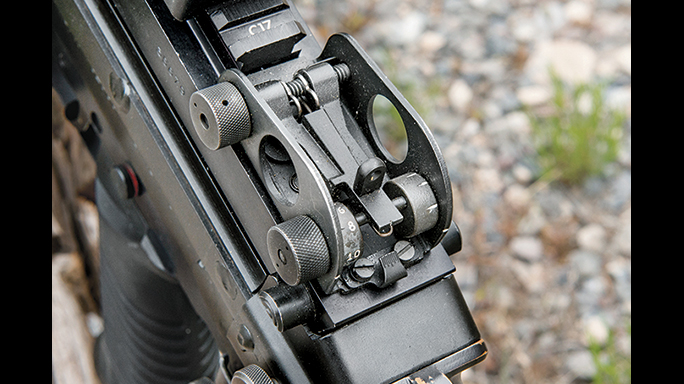 6 of 6
Gun Test: Machine Gun Armory’s 300 Blackout SAW K
Behind the receiver’s top rail is an adjustable rear aperture sight that’s effective out to the limits of the 300 BLK chambering. 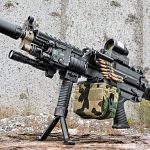 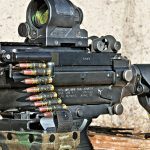 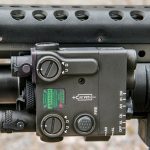 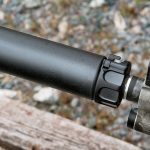 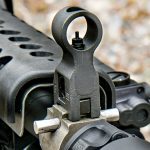 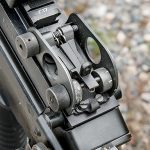 Belt-fed machine guns have been mainstays with militaries around the world for decades. For small units, these weapons provide significant cover and suppressive fire. The M249 squad automatic weapon (SAW) is the currently issued 5.56mm belt-fed machine gun for most squads in the U.S. military.

U.S. Machine Gun Armory (MGA) has created several versions of the M249 and is constantly trying to improve on the basic system. As part of this effort, it offers a number of caliber conversions as well as stock and handguard options. The company’s own patented SAW, currently available in 5.56mm NATO, 300 Blackout, 6.8 SPC and 7.62mm NATO, is pretty versatile. Now the company has gone a step further by creating a smaller variant—the MGA SAW K—and I recently tested a
version in the ever-popular 300 Blackout.

If you want to cut a rifle’s weight, you should start by looking at the barrel. One of the easiest ways to shed pounds is to make the barrel shorter, so the MGA SAW K starts with a 9.75-inch barrel. The SAW K uses a proprietary piston design that facilitates AR-style stocks straight behind the action—there’s no drop or a heavy buffer. Various handguards can also be used, including railed units. The new system makes the SAW K work in several chamberings, including 5.56mm, 300 BLK, 6.8 SPC and 7.62x39mm, and MGA is currently working on a 7.62mm NATO/.308 Winchester version that will utilize a 13-inch barrel. In all, the SAW K weighs about 5 pounds less than a standard M249 SAW, a very noticeable difference.

My test gun came with a 9.75-inch, 1-in-8-inch-twist barrel chambered in 300 BLK and capped with a SureFire SOCOM muzzle brake. To this I added my SureFire SOCOM762-MINI sound suppressor. The SAW K’s overall length was similar to an M4’s, with a nice balance. The railed handguard housed a Steiner DBAL-A3 laser as well as an Mk4 Battle Light. The bottom of the handguard sported a Grip Pod with a quick release that made it easy to transition from off-hand to prone shooting positions.

As mentioned, the improved receiver houses a proprietary buffer system compatible with AR-style stocks. My test SAW K came with an Ark Defense Enhanced SOPMOD buttstock installed on a carbine-style buffer tube. The machine gun also sported windage- and elevation-adjustable front and rear sights. Belts were housed in a 100-round soft carry bag.

I added a Trijicon SRS red-dot sight to the receiver’s top rail for testing as well as a Magpul MS3 Gen 2 sling. MGA also provided belts of ammo for testing loaded with Gemtech’s 187-grain Predator subsonic and 125-grain Nosler supersonic ammunition. Standard 5.56mm links are used with the 300 BLK, while custom links are used for the 6.8 SPC and 7.62x39mm.

The SAW K’s smaller size is immediately noticeable. I could fit it in a standard rifle bag—with the sound suppressor and all. When I picked it up, the weight difference was striking. A difference of 5 pounds may not sound like much until you have to carry the weapon. Shouldering the MGA SAW K was as easy as it gets with a belt-fed machine gun. It still takes some strength, but at 10 pounds, the compact SAW K is not much heavier than some ARs.

Working in and around my truck and a shoothouse, I preferred using a single-point sling. This made it easy to get into a prone firing position, too. Carrying the SAW K would be easier with a two-point, however. In the end, this weapon’s weight and balance turns the platform into a viable CQB system.

The Grip Pod worked well with the SAW K. Simply push a button and the Grip Pod’s legs extend, turning it into a bipod for use in prone or on barricades. The SOPMOD stock was another great addition—I could extend or collapse it as needed to get into any position easily. Trijicon’s SRS proved excellent throughout the test.

While select-fire versions are available, my test SAW K was a full-auto machine gun. In other words, it’s not exactly a precise instrument. But, with controlled fire, the SAW K kept 10-shot bursts of Gemtech’s 187-grain subsonic ammo within an 8-inch circle at 25 yards and a 4-inch circle at 15 yards. Two-, three- and five-round bursts stayed inside 6 inches on the move. That’s absolutely impressive.

The SAW K just ran and ran. There were no malfunctions or failures to fire during testing. No links broke. Sure, it’s only one gun with limited ammo, but it performed better than other SAW-style variants I had previously tested. I would not hesitate a moment to take this 300 BLK weapon to work in the law enforcement realm.

If your law enforcement agency or team needs a belt-fed machine gun, make sure you take a close look at this one. Nothing to date has been as practical for use in close quarters or at shorter ranges. My guess is that it is just about perfect for military missions. And considering that you will soon be able to switch its chambering from 5.56mm to 7.62mm, the SAW K is pretty versatile. I’d prefer the 300 BLK, as I recently became one of its converts. One thing is for sure: I had trouble putting this gun down and sending it back to the folks at MGA! 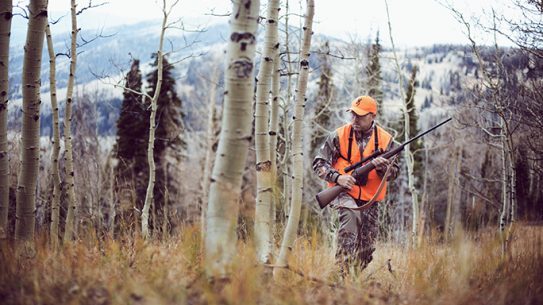 The AB3 rifle line from Browning will now feature short action calibers including 243...