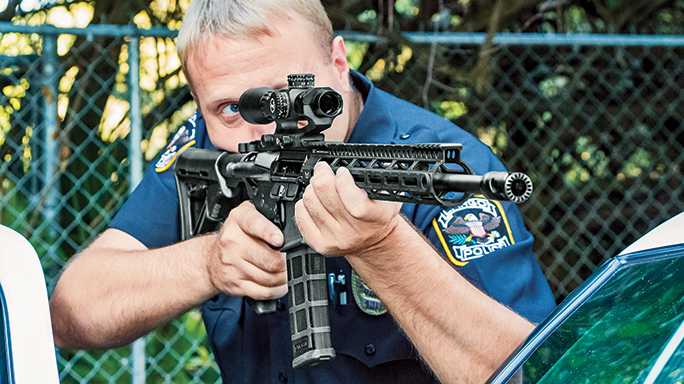 1 of 5
Gun Test: Midwest Industries’ M-LOK 223 Wylde Rifle
For an officer who may be on a perimeter position for hours at a time, having a lightweight rifle can be a real advantage. 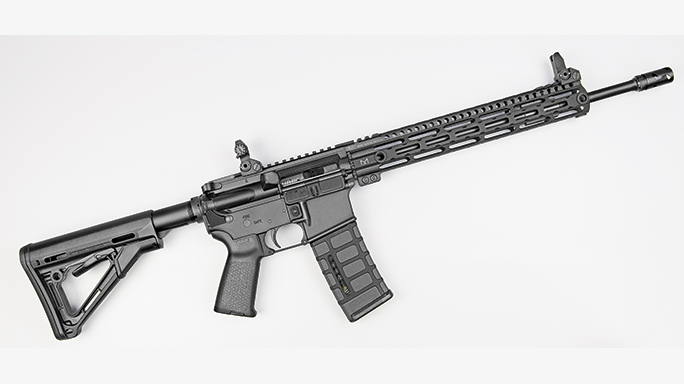 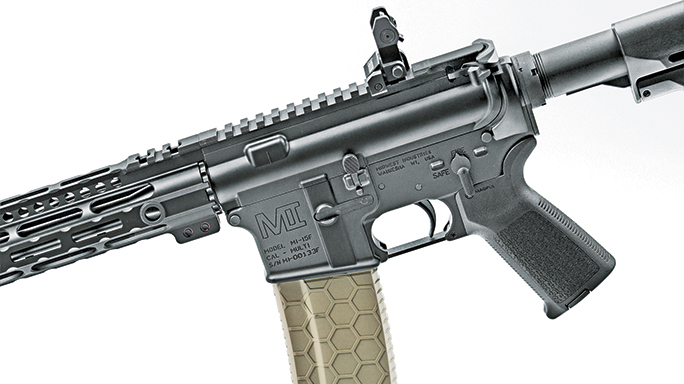 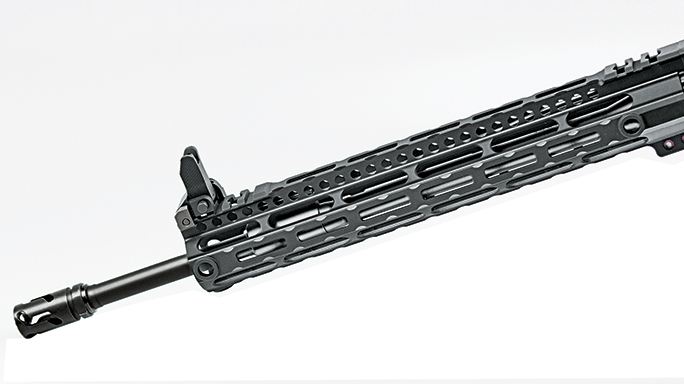 4 of 5
Gun Test: Midwest Industries’ M-LOK 223 Wylde Rifle
A front sight can be added on the short length of rail over the low-profile gas block. Also Note the numerous M-LOK slots. 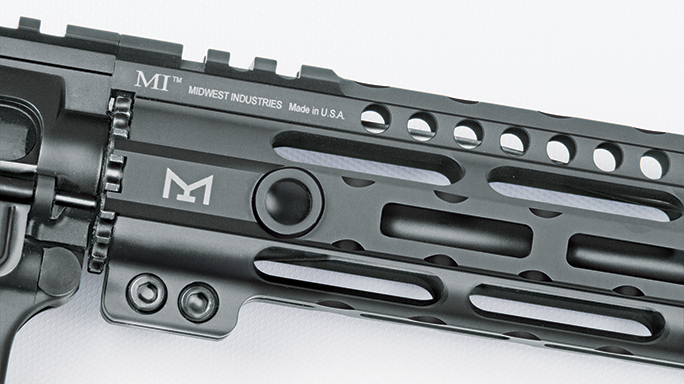 5 of 5
Gun Test: Midwest Industries’ M-LOK 223 Wylde Rifle
Quick-detach sling-mounting points are located on both sides of the handguard and buttstock for the quick addition of a sling. 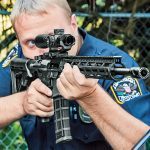 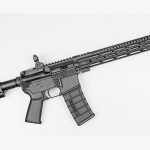 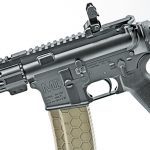 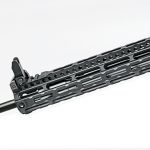 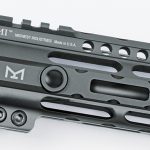 One of the charms of the AR-15 is its ability to deliver accurate rounds from a lightweight platform. Yet, as the years have gone on, there has seemingly been a trend toward heavier AR-15 rifles. Quad-rail systems replaced the original handguards, and with them came lights, lasers, foregrips and every other conceivable bit of supposedly tactical gear.

Fortunately, Midwest Industries recognizes the allure and practicality of a lightweight rifle. The 16-inch-barreled Mid-Length Lightweight M-LOK rifle is designed from the ground up to provide great performance without weighing the officer down with extra pounds.

In an age where it seems every AR has been tricked out with all kinds of gear, it is refreshing to pick up a gun designed to be light. Midwest Industries did its homework on this one, making it look good and weigh less than 6 pounds. Just picking it up, I knew it was a lot lighter than any of the other AR-15 rifles I’ve tested recently. Tossing this on my scale, I measured the weight right at 5.8 pounds before adding a loaded magazine.

Any officer who has sat on a perimeter position can tell you that after the first few minutes, a long gun can become surprisingly heavy. The longer you hold a position, the more you question the wisdom of every piece of gear and every length of rail that is adding ounces and pounds to the weapon. That is where the Midwest Industries rifle shines. Nothing has been added that is not needed.

Take the handguard, for instance. The rifle has the company’s own 12-inch Lightweight M-LOK handguard, which shaves off excess weight by eliminating bulky Picatinny rails. Instead, the handguard uses the more streamlined Magpul M-LOK system. M-LOK-compatible accessories can be added directly to the gun without the need for an intermediary rail. If you do need a Picatinny rail, you can add one that is the precise length desired instead of a full-length rail that is mostly unused. This helps keep the handguard thin and light. The handguard does have a short length of Picatinny rail over the low-profile gas block in the 12 o’clock position, since this is where a front sight will be added.

The weight reduction benefit of the M-LOK handguard is obvious, but all of the open slots also allow the barrel to cool more quickly due to the exceptional airflow around it. If you are concerned that the handguard may heat up while shooting, don’t be. I did not find this to be an issue at all. Throughout my testing of the gun, I did not experience any unpleasant rise in handguard temperature.

The top of the upper receiver has a long Picatinny rail for the addition of a rear sight, an optic or both. For this review, I mounted a 1.5-4x20mm Leupold Mark AR scope to the rifle using a Leupold mount.

The 16-inch barrel is chrome lined and has a lightweight profile for reduced weight. The standard rifle is equipped with an A2-type flash suppressor. My test model was upgraded with the company’s own AR-15 Flash Suppressor Impact Device. This muzzle device acts as both a flash suppressor and recoil reducer. Teeth on the front edge of the device can serve as an improvised impact weapon. The device is made of tool steel and has a Melonite finish. I liked the look and performance of this device and suggest you take a look at it as an upgrade to your rifle.

Continuing its use of high-quality components, Midwest Industries added a CTR stock from Magpul on this rifle. This stock is adjustable for length of pull and has a locking latch to prevent accidental activations of the adjustment lever. A QD attachment point for a sling is on both sides of the stock. The handguard also has a pair QD attachment points on both the right and left sides. I’ve found the CTR stock to be an excellent performer in the past, and it met my expectations on this rifle as well.

Matching the stock is a Magpul MOE pistol grip. This grip has a rough texture on the sides to improve the shooter’s ability to hold onto the gun in all kinds of conditions. The grip is hollow with a removable end cap. Magpul sells a number of inserts for these grips that allow you to store things such as batteries for a mounted red-dot sight. I’ve never used this storage compartment, but it is there if you need it.

Both the upper and lower receivers are forged from 7075-T6 aluminum that is then hardcoat anodized matte black. Throughout my testing of this gun, the finish held
up exceptionally well. Even the shell deflector was unmarked after firing hundreds of rounds. My test rifle was all black, but the rifles can be ordered with Flat Dark Earth furniture as well. These rifles are backed by the company’s lifetime warranty.

I took the Mid-Length Lightweight M-LOK rifle with me to an informal event hosted in a beautiful area east of Cleveland, Ohio. The range was exceptional, and we had a bright, sunny day for shooting. In addition to me, three others had an opportunity to shoot this rifle, including a pair of instructors and a SWAT sniper.

To keep the rifle fed, I had a trunkload of ammunition: hundreds of Remington 55-grain FMJ rounds plus a slew of premium loads from Hornady, Federal, Liberty Ammunition and others. In addition to the magazine provided with the gun, I also had a stack of 30-round magazines from Mapgpul, ASC, Brownells and Troy Industries on hand for testing.

The rifle’s groupings were good. With a surprisingly strong variable crosswind on the 100-yard range, we managed groups of 1.75 to 2.75 inches with the Leupold scope on 4x magnification. The 55-grain Hornady TAP Urban ammunition turned in the best groups, consistently clustering into 2 inches or less. With calm winds, I would expect to get groups closer to 1 inch with this load.

If you are not familiar with the TAP Urban load, it is designed to cause significant wound cavities while reducing the likelihood of overpenetration. According to Hornady, this load is a good choice when “collateral risk is high.” The load I had at the range used a 55-grain, polymer-tipped bullet, but a 60-grain version is also available.

Recoil is not generally an issue with an AR-15 rifle. With a sub-6-pound rifle, some shooters might be concerned that felt recoil would be unreasonable. Let me assure you that recoil is not a problem with this gun. Even the hottest 5.56mm NATO ammunition did not cause any concerns for the shooters on hand. Properly trained officers will not have any problems shooting this gun, and they will be thankful it is so light the first time they pull it out on a call.

The rifle also performed reliably on the range. With all of the different magazines, it cycled normally without any signs of problems. Magazines inserted and dropped free as one would expect. Some might describe it as boringly reliable—I call it a quality build.

I like this rifle a lot. Like other shooters, I have my share of AR-15 rifles, some with lots of rails and gadgets hanging off of them. But over the years, I’ve grown to appreciate the characteristics of a lightweight rifle that balances well and is easy to carry. Midwest Industries loaded this gun up with plenty of quality parts but remained keenly focused on keeping things light and reliable. It is clear that the company succeeded.

This rifle performed exceptionally well. It ran reliably with a wide assortment of ammunition fed from a variety of magazines. With a relatively low-power scope on a windy day, its accuracy was still good.

I’ve been a fan of Midwest Industries’ parts and accessories for a number of years, and I am happy to say that this rifle impresses me. At $1,200, this rifle is reasonably priced for the build quality and level of performance you can expect. It deserves your consideration when you are in the market for another AR, and I give it an unqualified recommendation. 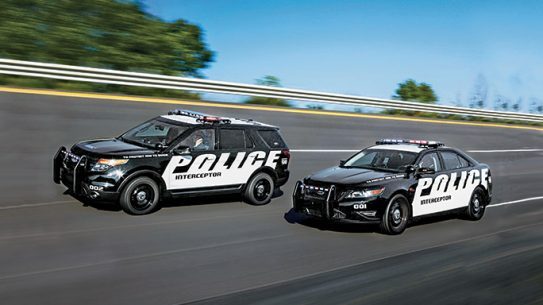