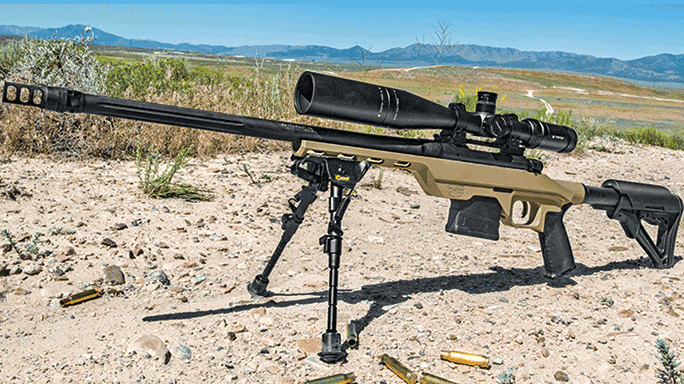 1 of 5
Gun Test: Mossberg’s Lightweight MVP-LC Rifle
Mossberg’s tack-driving MVP-LC is available as part of a ready-for-duty package with a Vortex 4-16x44mm Viper HS-T scope and a Caldwell bipod. 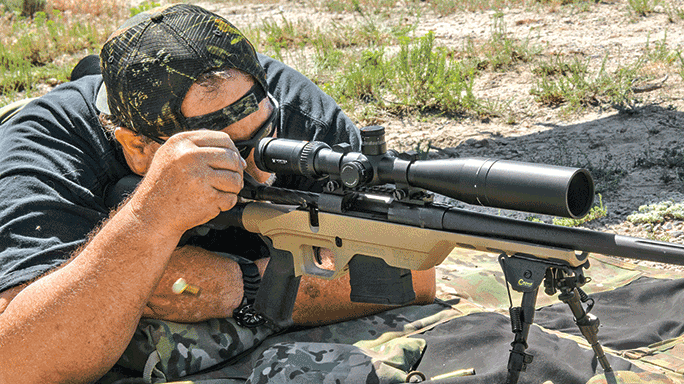 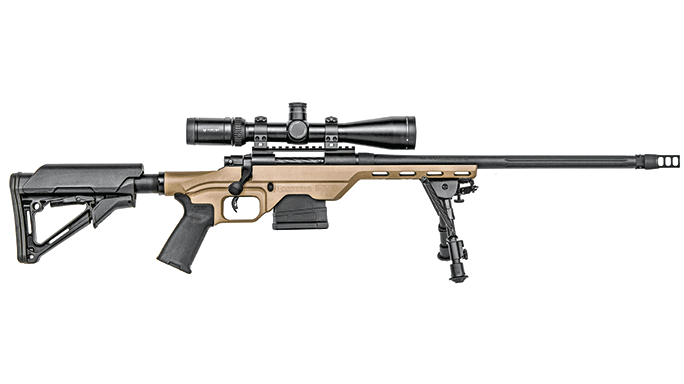 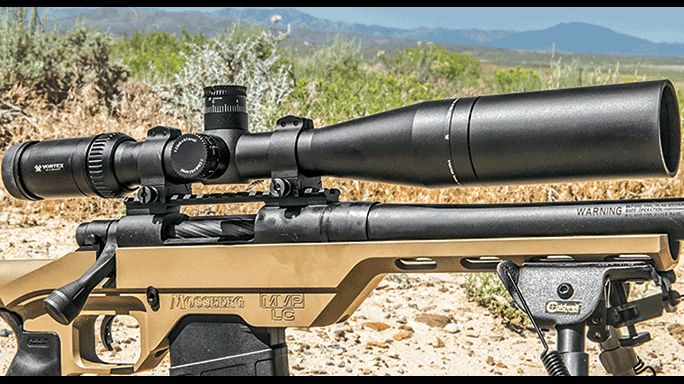 4 of 5
Gun Test: Mossberg’s Lightweight MVP-LC Rifle
The top rail made it easy to install the Vortex 4-16x44mm Viper HS-T riflescope that was included in the package. 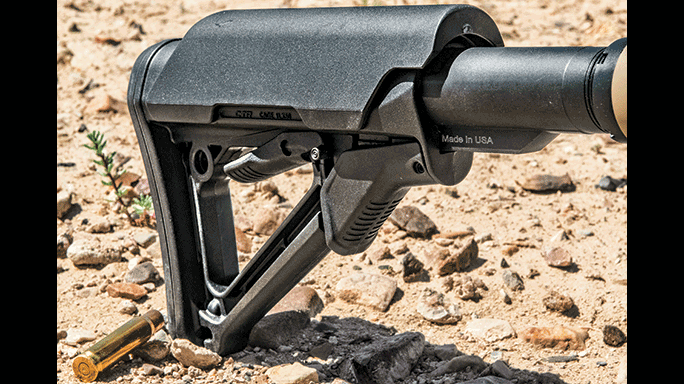 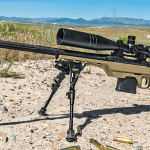 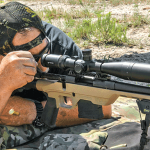 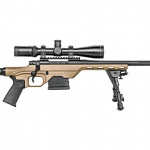 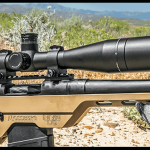 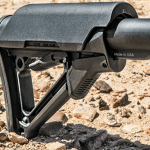 The police precision rifle realm has changed considerably in the last few years. When I became a police marksman over  15 years ago, most of the rifles for the task were simple, reasonably accurate and relatively affordable.

Custom rifles were rare or non-existent in most agencies. You just did not see many agencies or officers with more than $2,000 to spend on a rifle, a figure that covers the cost of some stocks these days. It’s a different world thanks to increased precision rifle popularity, especially from the competition world. Rifles are more complicated, heavier, more rugged and incredibly expensive.

Long-range competitions are thriving today. They’re fun, and most of these events have competitors shooting out to 1,200 yards, with many shots between 300 and 800 yards. But most officers will seldom have to engage threats at 100 yards let alone 1,200 on a deployment. Police marksmen still deploy at around 60 yards on average. Beyond observation and cover duties, their target is probably moving, likely behind glass, and they only get one shot.

For this sort of work, some might feel the need to get a 14-pound rifle with a $4,000 scope, or night vision, but most agencies simply can’t afford them. If your agency has the ability to get all this stuff, then fantastic! I wish every police marksman could have the most advanced equipment out there, but that is just not reality. So the question is, do you need it or can you do the job with less?

Simple can be better, and companies are starting to build rifles that will get the job done without breaking the bank. One such rifle is the new Light Chassis (LC) in the Mossberg Varmint Predator (MVP) series.

Mossberg’s bolt-action MVP rifles are very popular, with both 5.56mm and 7.62mm NATO models. The 5.56mm models are designed to feed from standard AR-style mags, while the 7.62mm rifles can use LR308/SR-25-style mags as well as M1A/M14-style mags. (The one exception is the MVP-LC 7.62mm rifles, which only feed the LR308/SR-25 style mags, due to chassis style). Several variants are available for both chamberings, with various stock options, barrel lengths, accessories and more for specific missions. The new LC models feature MDT LSS aluminum chassis.

The smooth, light LSS chassis system is made from 6061-T6 billet aluminum. It features V-shaped bedding and a free-floating forend for enhanced accuracy. The chassis was also designed with an AR-style buffer tube to utilize collapsible AR-15 buttstocks, and Mossberg includes the Magpul CTR for the MVP-LC. Out front, you can mount rails or a sling stud for attaching a bipod.

On top of the action you’ll notice a Picatinny rail for mounting optics. The MVP-LC also features Mossberg’s Lightning Bolt Action (LBA) trigger, which is adjustable from 3 to 7 pounds. An oversized bolt knob controls the MVP-LC’s fluted bolt. A push-button bolt release is in a location similar to a typical AR’s.

The MVP-LC can be ordered as a standalone rifle or as a complete package including a Vortex 4-16x44mm Viper HS-T scope and a Caldwell bipod. I tested a 7.62mm MVP-LC/Vortex HS-T combo that also came with a 20-round PMAG. My SilencerCo Saker 762 suppressor fit perfectly over the Trifecta muzzle brake that came installed on the 18.5-inch barrel. Everything came mounted and ready to go right out of the box.

One range day consisted of measuring the MVP-LC’s accuracy out to 900 yards. I also set up paper targets at 100, 300 and 500 yards. Another day was spent putting the MVP-LC through some more common police-related scenarios. Right out of the box, the scoped rifle was very close to zeroed with 168-grain ammunition. My first shots were within 4 inches of the point of aim at 100 yards, shooting at an elevation of 5,500 feet with 20 percent humidity and temperatures in the 90-degree range.

The Vortex HST is a solid little scope. The glass was clear, the reticle easy to see and the knobs easy to use. For the long-range shooting, I used Barnes’ new 175-grain OTM ammunition, which has proven to be incredibly accurate—especially in the MVP-LC. Five-shot groups at 300 yards measured inside 2 inches, with four rounds often clustering inside 1.5 inches. Not much changed at 500 yards, with my best group measuring between 2.5 and 3.5 inches. That’s pretty impressive. There wasn’t much wind, which helped quite a bit, but the MVP-LC remained very accurate.

Moving out to 900 yards, the wind became more of an issue, so it took some time to get things dialed in. Since this was a test of the rifle, I adjusted for the wind in the scope. Once I established the windage and elevation, I fired a 10-shot group as fast as I could get back on target. All said and done, the group measured right around 8.5 inches, which is still under 1 MOA. Moving back to 100 yards, the best five-shot group measured 0.78 inches at 100 yards with the Barnes ammo. Every other group was right around an inch, which is more than acceptable for police use.

Moving around the range to practice deployment scenarios, the MVP-LC proved very handy and plenty accurate. Taking shots from 50 to 100 yards from barricades and other supported positions, it was possible to take a first shot and keep follow-ups inside a 1-inch circle. None of my groups from kneeling were outside 3 inches. My department’s qualifications include kneeling and seated positions, and the MVP-LC is a joy to shoot in these conditions, even with the suppressor attached. All of this testing was done using Hornady’s 155-grain TAP A-MAX ammunition, my last deployment round in .308 Winchester.

Over two days of testing, I was able to work in five cold-bore shots. The first two of each day were clean, while the others were fouled from as little as 10 to as many as 40 rounds. I completed three-shot follow-up groups, and they all ended up inside an inch relative to the cold-bore shots. The clean cold-bore shots were the widest—as much as 0.5 inches from the groups—and fouled shots were the closest. This kind of consistency more than meets any reasonable accuracy criteria, and the MVP-LC was more accurate than some of my custom rifles from years past.

If you are looking for a rifle to attach goodies that add up to more than most officers’ salaries, this isn’t it. The MVP-LC is minimalist by design. There is no room for the $10,000 laser, $14,000 NVD or even some of the $40,000 thermal sights. You can add a scope, a light or laser and a bipod. But if you want simple, repeatable accuracy to take that one shot under most conditions, the MVP-LC will certainly do it.

Most of the testing was completed using a 10-round PMAG, but it ran with the 20-rounders along with some magazines from LaRue Tactical, DPMS, Lancer and Brownells. The bolt was smooth, fast and easy to manipulate. While the bolt would hold open after the last round, a firm push forward slides the bolt over the top for single feeding. The safety operates like that of the Remington 700 that many are used to, and the bolt release is on the top-left side.

This was my first time using the LBA trigger, and it was very nice. Adjusted to about 4 pounds, my test rifle’s trigger was crisp with very little creep. Once I got used to it, this trigger allowed for some very solid accuracy and, above all, remained predictable throughout.

The Vortex HS-T was more than adequate for most simple duty uses. The knobs are easy to read, tactical and reset to zero. Simple MRAD reticles are fine for most police work, and the glass was very clear with no yellowish tint. With a 44mm objective, the scope stays nice and close to the rifle and remains lightweight.

This is a fantastic, capable rifle. It’s perfect as a lightweight varmint hunter, and it’s certainly usable for police marksmen. If you are in the market for either, make sure you check out the MVP-LC. 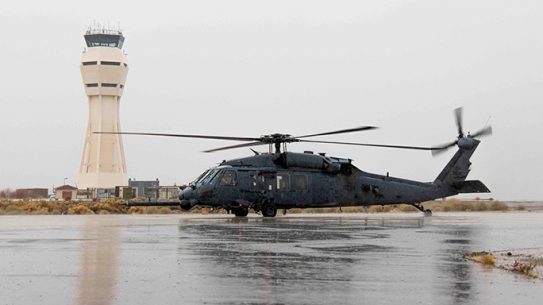