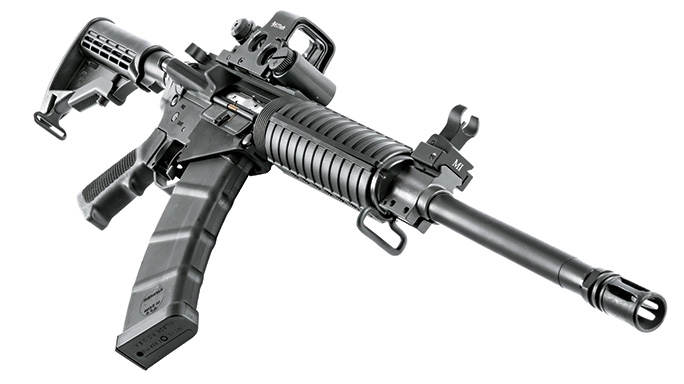 Rock River Arms offers several LAR-47 variants—including the CAR A4 (shown with an EOTech HWS and Midwest Industries backup sights) and the Delta the author tested—but they all combine AK firepower and AR ergonomics.
Comment(s)

Companies have been building AR-15 rifles chambered in 7.62x39mm for years. Unfortunately, those rifles that use standard AR-15-style lower receivers are often unreliable because the straight-walled magazine well of an AR-15 is not well suited to cartridges with tapered cases. Special magazine followers help, but there’s no getting around the fact that the 7.62x39mm cartridge works far better in the AK’s characteristically curved magazine, which doesn’t fit the AR-15’s magazine well.

The LAR-47 from Rock River Arms (RRA) is the company’s first rifle chambered in 7.62x39mm, and it solves this feeding problem by using a radically redesigned AR-15 lower receiver that accepts many unmodified AK-47 magazines. The LAR-47 Delta I tested, with its quad-rail handguard, ERGO grip and more sophisticated collapsible stock, is an upgrade to the standard model.

The LAR-47 uses the AR-15’s conventional direct gas impingement operating system with the gas block mounted in a carbine-length position. The rifle uses forged aluminum receivers, but the lower has a magazine well shaped to accommodate AK-47 magazines with their characteristic curve and rear locking tab. Like the AK-47, the LAR-47 lacks a bolt catch so the bolt closes on an empty magazine and cannot be locked open. Some of that lost functionality, however, can be recovered by using certain Yugoslavian and Croatian AK-47 magazines with followers that hold the bolt rearward while inserted.

Loading and unloading the rifle is similar to the AK-47. To load, simply tilt the magazine forward to engage the lip with the receiver, then rock the magazine backwards to lock it in place. To unload, press the ambidextrous, paddle-style release mounted inside the triggerguard and sweep the magazine forward. The magazine release is made from steel and firmly locks the polymer, 30-round magazine in place without any movement. Though RRA notes that most AK-47 magazines will fit, the Chinese and Tapco mags I tried did not, nor will any drum magazines. A Magpul magazine, however, did fit and function perfectly.

The LAR-47 field-strips like an AR-15 and uses the same internals, including the trigger, safety, disconnector, hammer and springs. The two-stage trigger on my test rifle weighed approximately 5.5 pounds. Besides the obvious, parts that differ include the upper receiver, bolt and bolt carrier, extractor, ejector and firing pin.

Certain parts are chrome plated—a big plus for this rifle given the availability of surplus ammo with corrosive primers. The LAR-47 has a chrome-lined barrel and chrome-plated bolt carrier, bolt, extractor, ejector and firing pin. The 16-inch barrel has an HBAR profile and an A2-style flash suppressor. Its 1-in-10-inch rifling twist rate is standard for the 7.62x39mm cartridge.

Though most 7.62x39mm loads are not known for their accuracy, I tested the LAR-47 Delta at 100 yards using a Leopold Mark 4 scope, a Caldwell rest and sandbags with three loads from Hornady, Red Army Standard and Wolf. To test the rifle’s functioning, I also used Golden Tiger ammo. With the Hornady and Wolf rounds, I achieved the best five-shot groups of 1 and 1.25 inches, respectively. Several of the Wolf groups would be tight until the fifth shot, a flyer, opened them up. The best Red Army group measured 2.9 inches.

Rock River Arms’ LAR-47 Delta handled well even with full magazines and was very controllable, especially when fitted with a Magpul foregrip. It really worked well when transitioning between targets. 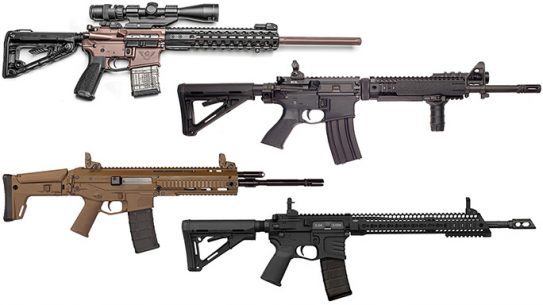 A roundup of the best rifles from The Complete AR Rifleman 2016. Check out...