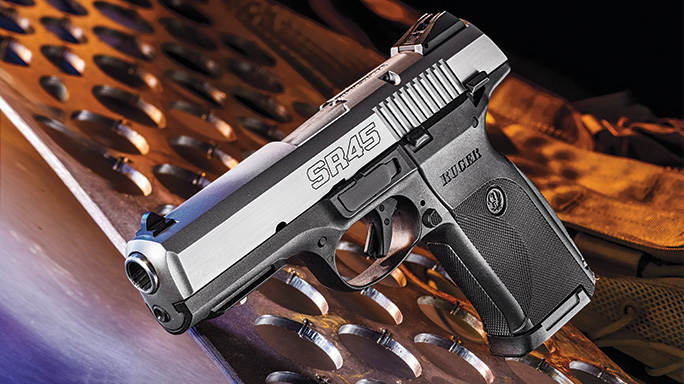 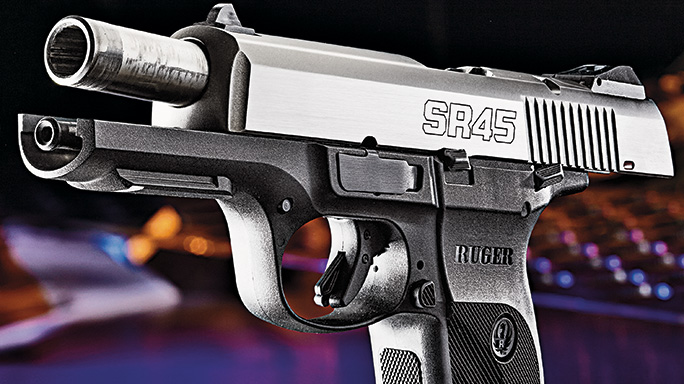 2 of 7
Photo by Steve Woods
SR45: Ruger’s Tough-As-Nails .45 ACP Pistol
The glass-filled nylon frame is designed to offer a low bore axis, which translates to less muzzle flip in use. 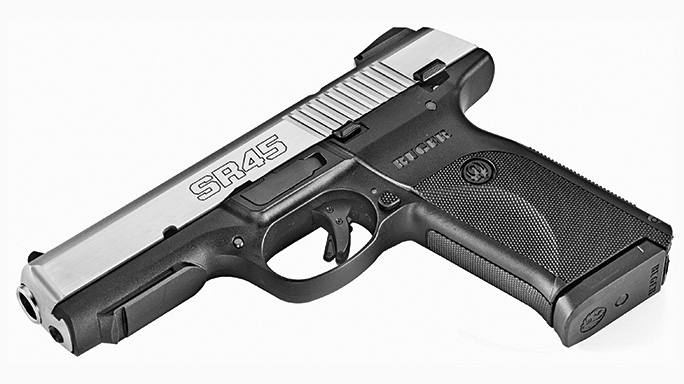 3 of 7
Photo by Steve Woods
SR45: Ruger’s Tough-As-Nails .45 ACP Pistol
“… muzzle flip, off-hand, was a non-issue. It was easy to stay on target for faster follow-up shots.” 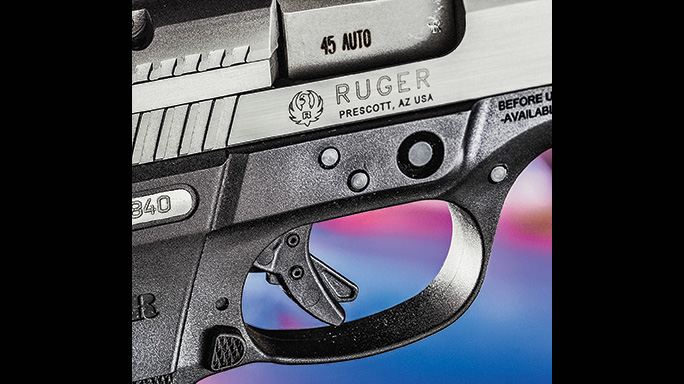 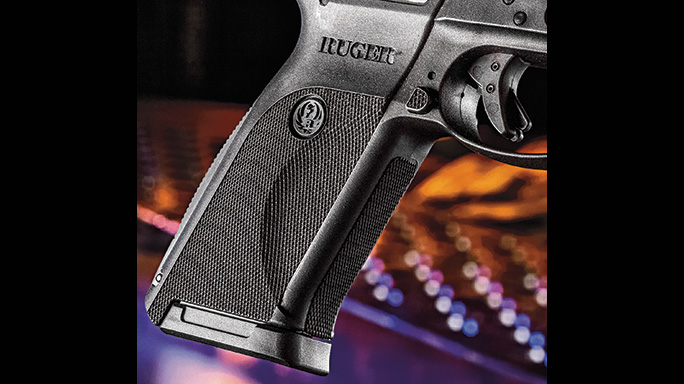 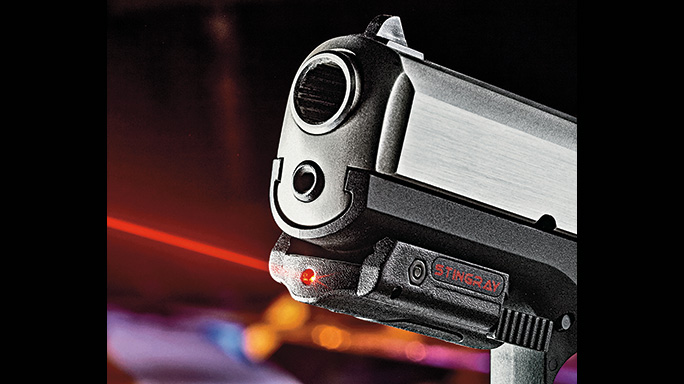 6 of 7
Photo by Steve Woods
SR45: Ruger’s Tough-As-Nails .45 ACP Pistol
The accessory rail molded into the dust cover makes it easy to add lights and lasers like the ArmaLaser Stingray. 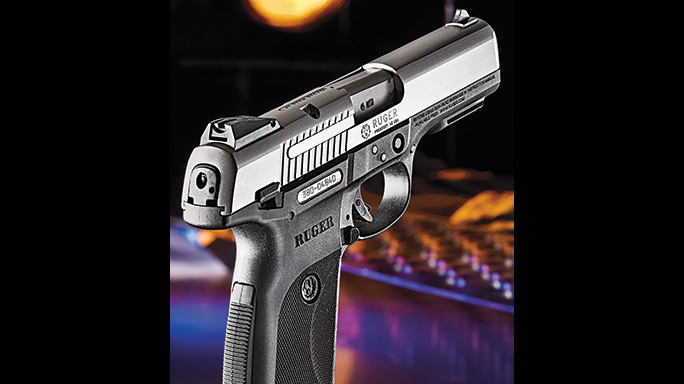 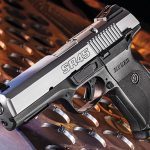 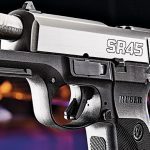 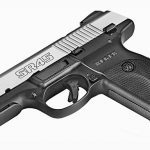 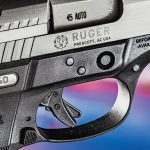 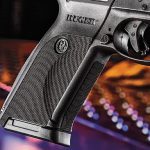 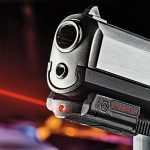 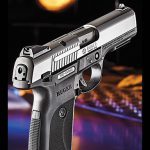 The never-ending debate between aficionados of one handgun caliber over the other has been known to get personal, but in practical applications, such as in law enforcement, terminal ballistic performance is far being from the only issue. Police agencies must select a pistol/caliber combination that delivers what they need on every level and for every officer. Several large agencies, including a few state police departments and many smaller agencies, have nevertheless opted for the .45 ACP as their standard-issue cartridge. A casual search reveals that many of these are in somewhat rural areas where having a harder-hitting round may be more of a priority.

We may never settle the 9mm versus .45 ACP debate, but thanks to Ruger, those who want big-bore firepower with a high capacity that can still fit in any officer’s hand have a remedy. Based on the SR series, which was originally introduced in 2007, the latest SR45 is a polymer-framed, full-sized, striker-fired, recoil-operated, semi-automatic pistol chambered in the powerful .45 ACP cartridge and featuring a 10+1 capacity. Ruger first developed its line of polymer (actually, glass-filled nylon) frames to more easily reduce the dimensions of the pistol and make it lighter,
slimmer and more convenient.

Over the past 60 plus years, Sturm, Ruger & Company has established an enviable reputation for manufacturing innovative and well-built pistols, rifles and shotguns. Founder Bill Ruger was known for building his guns tough, but he was also a gifted gun designer. Carrying on that tradition, the company that Bill Ruger and Alexander Sturm founded continues to introduce new designs as well as regular improvements on existing popular guns.

The Ruger SR45 is no exception. The grip is exceedingly thin—to the point where it feels like a single-stack gun in hand, despite holding a 10-round, double-stack magazine of fat .45 ACP cartridges. The grip is also very well checkered on the sides and front, and stays in the hand well.

The grip’s backstrap has a rubberized insert that is removable and reversible. One side provides an arched profile while the opposite side offers a flat profile. This versatile design makes the pistol adaptable for officers with various hand sizes in the same department. However, while the SR45 is incredibly thin, I found the grip to be on the long side from front to back, even with my average-sized hands. The flat backstrap does significantly improve this, and the pistol should be comfortable for all but those with very small hands. The backstrap is held in place with a steel crosspin that also does double duty as an attachment point for a lanyard.

The frame’s dust cover features an integral accessory rail for mounting lights or lasers, and the triggerguard is nicely oversized for comfortable use while wearing gloves. The magazine release is ambidextrous, as is the thumb safety—features that are sure to be appreciated by left-handed officers. The small but fully functional slide catch helps prevent accidental activation, especially when shooting with a firm two-handed grip.

The pistol comes standard with two steel, 10-round magazines with polymer followers and baseplates. The magazines include convenient witness holes to account for all 10 rounds. The baseplates feature a slightly extended finger rest and gripping grooves to make magazine removal easier and faster, although the magazines do drop free under normal circumstances. A metal mag-loading tool helps take the sting out of topping off magazines, but take note of the instructions, as it works differently than most I have tried and requires manually loading the first round.

The SR45 is available with a matte stainless steel or black nitride-finished slide. Atop the slide, the steel, three-white-dot sights are dovetailed, and both are drift-adjustable for windage. The rear sights can also be adjusted for elevation with an easy-to-use screw adjustment on top. A windage lock screw must be loosened to make drift adjustments, however. The front white dot is larger than the two rear white dots, which makes it easier to focus on the front sight and align it with the rear when speed is a concern.

The rear of the slide features well-spaced and aggressive slide serrations for easier slide manipulation and operation, and the massive external extractor does a reliable job of pulling cases from the chamber. The full-length captive guide rod, made of polymer, utilizes a single spring. On the range, it functioned flawlessly.

The Ruger SR45 has multiple internal and external safety features. The ambidextrous thumb safety locks the trigger and trigger bar from any rearward movement. It clicks down to the “fire” position easily, but placing the thumb safety to the “on” position requires a bit more effort. There is also a trigger safety in the form of a tab on the face of the trigger. This tab must be depressed and rotated out of the way for the trigger to be depressed. Internally, a firing-pin block also works to stop the striker from moving forward unless the trigger is fully depressed. In addition, the SR45 has a magazine disconnect safety, which means that the pistol will not fire with the magazine removed.

Finally, the SR45 features a loaded-chamber indicator, located on top of the slide, at the rear of the ejection port. When there is a cartridge case in the chamber, this indicator protrudes conspicuously, is labeled “loaded when up” in capital letters, and has bright-red paint on both sides. It offers an immediate visual and tactile indication from either side of the pistol that there is a cartridge case in the chamber. Ruger has certainly taken every step possible to make this pistol as safe as it can be.

The magazine-disconnect safety does present an interesting dilemma that I had not previously encountered. At first it seemed odd that the trigger squeeze, when dry firing, felt gritty and heavy, but when live firing, it was actually quite pleasant. I should have read the manual first, as it clearly states that the pistol should only be dry fired with an empty magazine inserted. Dry firing without the magazine in the gun increases the friction the striker experiences as it rides along the magazine-disconnect safety, producing a gritty feel. Dry firing with an empty magazine inserted provides the proper feel for the trigger.

On the range, the Ruger SR45 performed flawlessly. I experienced zero malfunctions while using a mix of hollow-point and ball ammunition. The pistol’s accuracy at 25 yards from a sandbag rest was very good and consistent, with average five-shot groups, across all types of ammo, measuring about 3 inches. The recoil was extremely manageable and pleasant off-hand, and the pistol will prove very comfortable to shoot for all but the most recoil sensitive.

With all the pistol’s weight located on top and the ergonomic grip, which allows for a very high hold that places the shooter’s hand much more in line with the axis of the barrel, muzzle flip, off-hand, was a non-issue. It was easy to stay on target for faster follow-up shots. The trigger broke cleanly at a consistent 8 pounds, but it felt lighter than that with a medium amount of travel. The reset did require the trigger to move completely to its forward position, however.

One of the brands of ammunition I tested was the Guard Dog Home Defense load from Federal Premium, which is designed as a full-metal-jacket (FMJ) round on the outside but still expands like a typical hollow point. Internally, this round features a special blue polymer that is crushed by the front of the jacket when it hits its target and mushrooms nicely. This round also features low weight, higher velocity and lower recoil, which can be a great benefit to new and smaller-statured shooters who may be recoil sensitive but still want a dependable self-defense round.

The SR45 is unquestionably a solidly made, tough-as-nails and reliable handgun built to last with many safety features. Its design, versatility, size, low recoil and full-power loading will certainly appeal to any law enforcement agency that wants a big-bore caliber while not sacrificing on magazine capacity. Its slim profile and relatively light weight also make it easier for officers of various sizes to comfortably carry it for all-day duty. 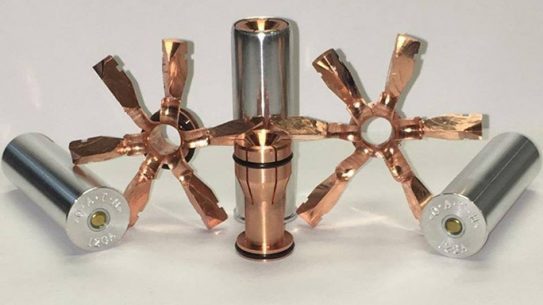 The Tango Shotgun Round from Oath Ammunition travels at 1,200 feet-per-second and expands into... 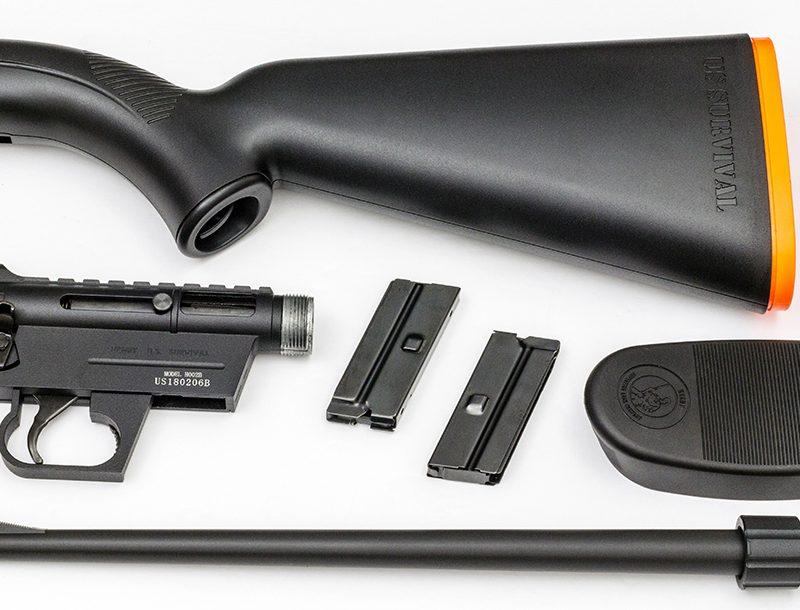 AR-7: The Henry Survival Rifle Breaks Down With Plenty of...