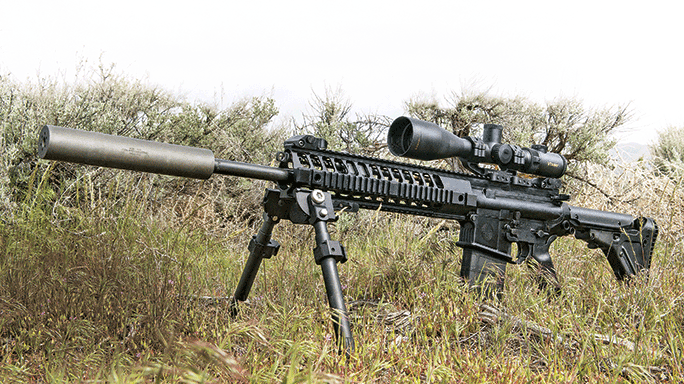 1 of 6
SIG716 DMR: Sig Sauer’s 7.62 Semi-Auto Sniper Rifle
Thanks to its adjustable gas system, the SIG716 DMR didn’t miss a beat during testing when a suppressor was installed. 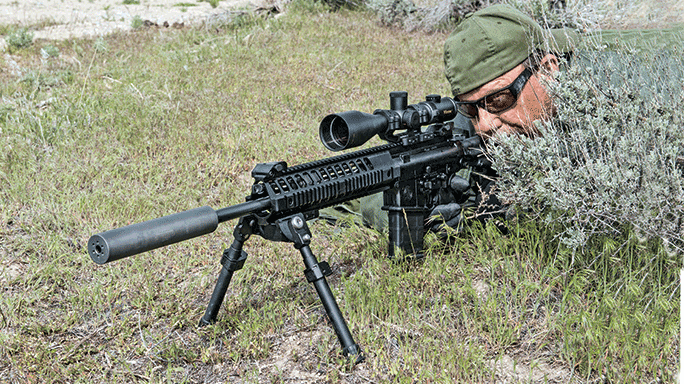 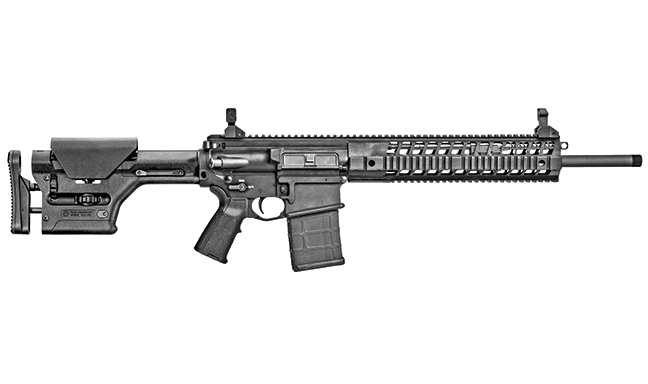 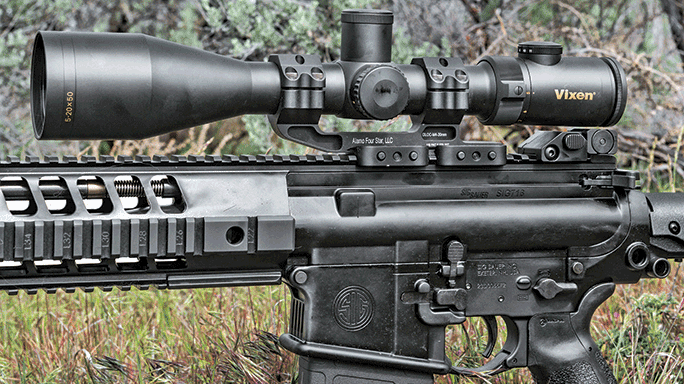 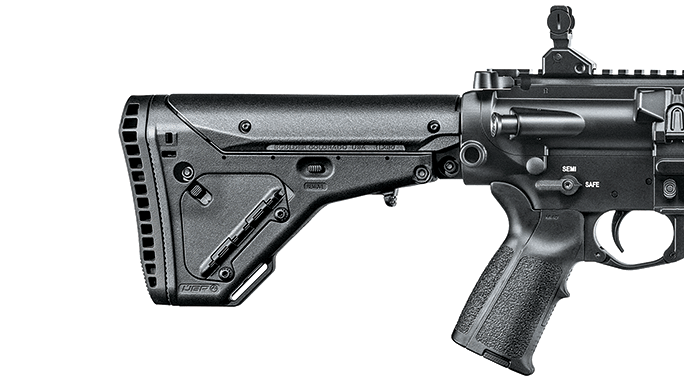 5 of 6
SIG716 DMR: Sig Sauer’s 7.62 Semi-Auto Sniper Rifle
While current models of the SIG716 DMR come with a Magpul PRS stock, the author tested an early model with a Magpul UBR buttstock. 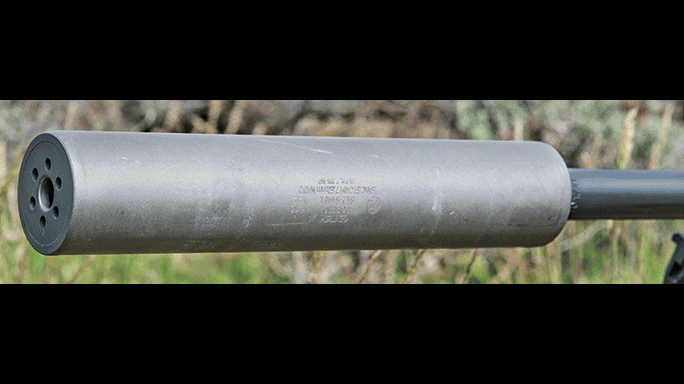 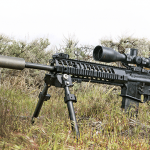 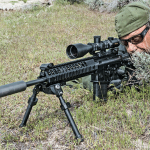 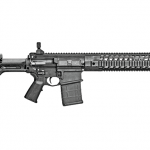 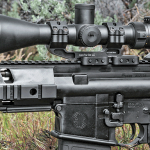 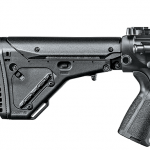 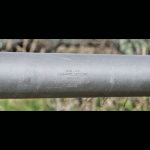 Designated marksman rifles (DMRs) have been around for years.

Traditionally, they were accurized versions of concurrent combat rifles. Typically semi-automatic, they provide better accuracy than the standard-issue rifle while maintaining increased firepower. They must be accurate, but not necessarily as precise as a typical sniper rifle. Generally, they are issued to observers paired with a sniper who is armed with a precision bolt-action rifle. They can also be issued to unit marksmen who may not operate as part of a typical sniper-observer team.

This description is still somewhat accurate, but time, technology and changing battlefields have altered the norm significantly. Once the purview of the military operator, police departments now issue DMRs. The accuracy of these weapons has improved considerably, with many rivaling bolt actions. They are lighter, more reliable and more useful than ever. Military units are clamoring for these weapons because of today’s asymmetric warfare, and many police departments are strongly considering adopting DMRs. Given the proliferation of the AR-platform rifle in both arenas, it remains the first choice, with the 7.62mm NATO being the primary chambering.

Some early 7.62mm AR rifles had serious reliability issues and weren’t very precise. Installing a suppressor generally made them less reliable, and they did not like to feed polymer-tipped ammunition or the barrier rounds of the day. But things have changed, and most of those issues have disappeared due to higher manufacturing quality. Most DMRs are still direct-impingement designs, while a few are piston-driven, including one of the newest, Sig Sauer’s SIG716 DMR.

Sig Sauer’s SIG716 DMR has several enhancements. Using the tried-and-true short-stroke pushrod operating system, the SIG716 DMR has a four-position gas valve that can be adjusted for adverse conditions or suppressor use. The rifle features a match-grade, 18-inch barrel with six-groove, 1-in-10-inch-twist rifling. The muzzle has 5/8×24 threading to accommodate muzzle attachments or a suppressor, and the rifle comes with a knurled threat protector.

The SIG716 DMR’s quad-rail forend is longer than the standard SIG716 Patrol’s, with the gas block positioned farther forward. The forend’s Picatinny top rail mates nicely to the flattop upper receiver’s, providing plenty of space for mounting scopes, sights, lasers or night vision. Quick-detach (QD) sling cups are positioned at the front and rear on both sides of the forend, and several cutouts along the forend help dissipate barrel heat and reduce weight without sacrificing strength. Flip-up front and rear sights come with the SIG716 DMR, so it’s ready for action right out of the box.

The lower receiver has all the same controls as the standard SIG716 Patrol, but the trigger is a crisp, two-stage, match-grade unit for increased accuracy, and it remains consistent enough for operational use. The SIG716 DMR also features a Magpul MIAD pistol grip and a Magpul PRS buttstock, which offers a bit more adjustability over a standard mil-spec stock and locks into position solidly. Magpul PRS stocks can be adjusted for both comb height and length of pull. My test rifle was an early sample, however, that came with a Magpul UBR stock, which is adjustable for length of pull and features an internal storage compartment as well as several sling-mounting options.

Sig Sauer also shipped my test rifle with a Harris bipod and all of the necessary parts to attach it to the bottom forend rail. It also came with a sling, one 20-round magazine and the additional backstraps for the Magpul MIAD pistol grip. It was pretty much ready to go right out of the box.

I added a few things for testing, starting with a suppressor. Gemtech’s Sandstorm has served me well over the last year during several rifle tests. It remains the lightest precision rifle suppressor I’ve tested to date, and its sound suppression is excellent with little or no shifts in point of impact. Constructed of titanium, it weighs in at a mere 13.3 ounces. It threaded onto the SIG716 DMR easily and snugged up nicely.

Next I added a Vixen Optics 5-20x50mm VII scope with an illuminated mil-dot reticle. With a 30mm tube and an overall length of 13.9 inches, it fits nicely on AR-style rifles. With a retail price at around a grand, Vixen’s VII scopes are pretty affordable and so far have proven to be high quality.

I used my Long Range Accuracy (LRA) bipod to ensure the greatest stability during accuracy testing. This bipod is solid, and it cradles the rifle, holding it lower and more centered. This particular bipod generally sits on my competition precision rifle, and I’ve used in on numerous rifles with great effect.

The test rifle came with a test target showing a group measuring a bit under 0.7 MOA, which is impressive for an AR-type rifle in this caliber, especially one that is piston driven. This group was indicative of my testing. Every load I used during testing grouped under 0.8 inches, with my best group, using Federal’s M118LR ammo, measuring 0.51 inches. Like many of these rifles, the SIG716 DMR was designed to meet military requirements, so the M118LR or similar loads seem to work best. Federal’s 175-grain Gold Medal Match was very close at 0.6 inches. The rifle seemed to have a preference for the heavier bullets, with all of them shooting into between 0.6 and 0.7 inches. For each group, I started from a closed bolt and charged the first round manually. Many semi-automatics will experience a significant shift between the first and fifth round, but this wasn’t the case with the SIG716 DMR. I did not see any appreciable difference in grouping. This semi-auto rifle was more accurate than several bolt-action rifles I’ve tested.

Suppressing AR rifles can be a chore, especially in this caliber. But that wasn’t the case with this rifle. Installing my Gemtech Sandstorm, the SIG716 DMR was extremely reliable. Moving the gas adjustment knob to the “suppressed” mode, the rifle ejected nicely and was really soft to shoot. Removing the suppressor, there was no appreciable shift in the point of impact—less than 0.5 inches. The sound suppression was excellent, and rifle remained soft shooting. I’m sure the SIG716 DMR semi-auto would also work well with Sig Sauer’s new line of sound suppressors.

As expected, the rifle’s reliability was flawless. When I tested an earlier SIG716 model, it yielded some of the most reliable operation of any AR-type rifle I’ve tested in 7.62mm NATO. This rifle is no less reliable—it’s just quite a bit more accurate. All of the outstanding ergonomics remain, including the multiple sling-attachment points and ambidextrous safety and magazine release.

Removing the suppressor and bipod, the SIG716 DMR was pretty light, very well balanced and worked incredibly well even in full kit—including while wearing a plate carrier. Using a red dot, a low-power optic or even the included iron sights would make this an incredibly accurate patrol rifle. The Magpul UBR stock also grew on me with use. It really adds to the rifle’s versatility.

Vixen’s VII scope worked well, with clear glass and precise adjustments. While not a big fan of 0.13-MOA adjustments, it was workable. The scope maintained its zero and allowed for excellent accuracy, and the mil-dot reticle subtended properly.

Sig Sauer’s SIG716 DMR is very versatile. My testing indicates that it is more than suitable as a dedicated precision rifle, especially for law enforcement applications. Mount a long-range optic and a dedicated sound suppressor, and it would serve any police marksman well. Cold-bore testing revealed the rifle’s consistency, with subsequent shots showing almost no shifts in the point of impact. In this configuration, recoil is minimal, allowing for very fast follow-up shots. With its 18-inch barrel, the rifle fits in a standard sniper drag bag with the suppressor attached.

Moving to a more typical DMR role, it can be equipped with a lower-power scope like a Trijicon VCOG or another parallax-free 1X variable. Using the UBR stock, it works in full kit, making it more versatile on deployment. Remove the suppressor and it is very handy, well balanced and suitable for use in a number of conditions. Swap out the scope for iron sights or a holographic or red-dot sight and you have a fantastic patrol rife with superb accuracy. Shipped with excellent iron sights, the SIG716 DMR could hit the streets right out of the box. Just add your preferred ammunition.

With a retail price of $2,970, the piston-driven SIG716 DMR in 7.62mm NATO is an incredible value. Having tested rifles with fewer features but price tags closer to $4,000, the SIG716 DMR is very competitively priced. As an agency, you’ll save even more, making it a fantastic choice for law enforcement. Either way, it is an accurate and reliable piston-driven rifle with increased versatility that is seldom matched these days. If you are in need of a precision AR with a ton of solid features, make sure you check out the SIG716 DMR. 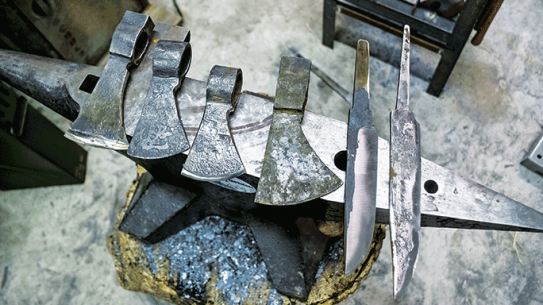