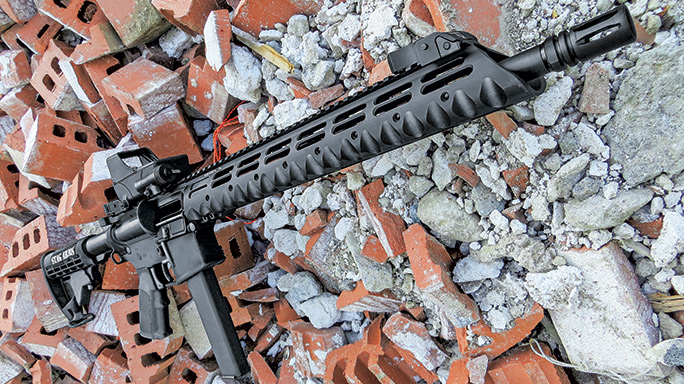 1 of 6
Gun Test: Stag Arms’ Model 9T Rifle in 9mm
Stag Arms’ new Model 9T is built to maximize the 9mm’s capabilities—and it can use your sidearm’s ammo. Shown equipped with a Meprolight Tru-Dot red-dot sight. 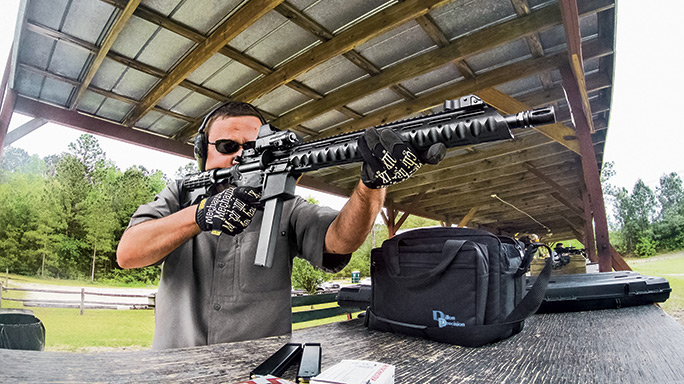 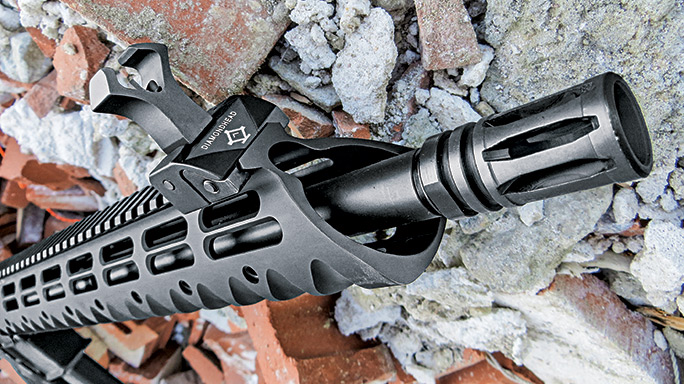 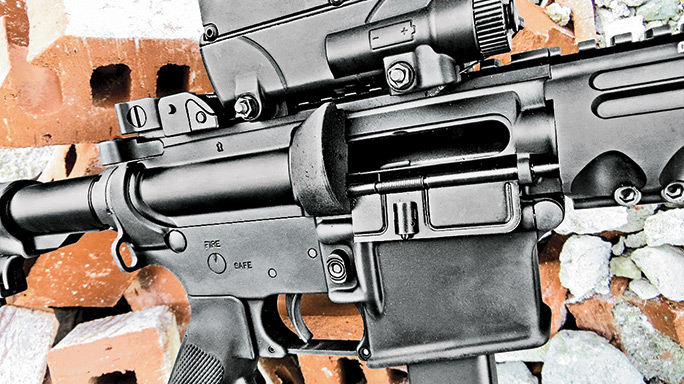 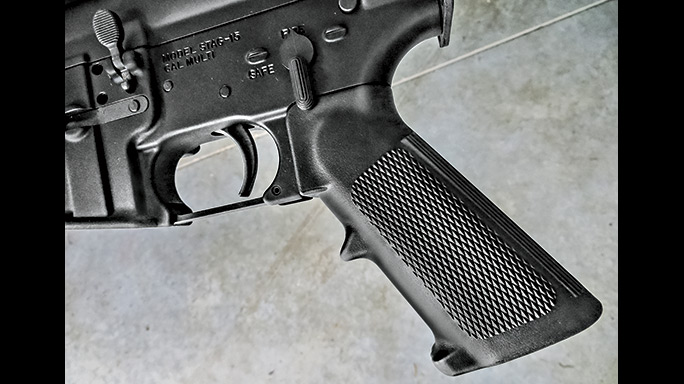 5 of 6
Gun Test: Stag Arms’ Model 9T Rifle in 9mm
The 9T has standard AR-style controls, and the lower is fitted with a traditional checkered, A2-style pistol grip. 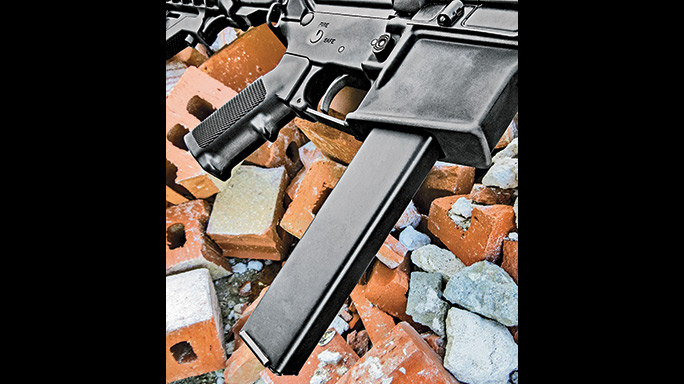 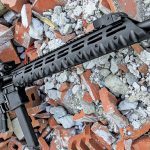 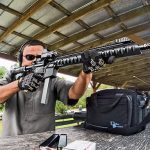 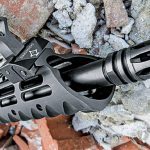 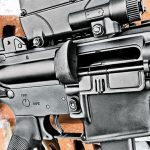 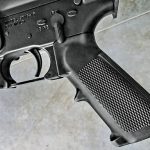 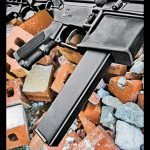 Since the days of John Dillinger, law enforcement agencies have turned to the submachine gun as an effective tool in certain scenarios. Though the use of compact 5.56mm ARs in personal- defense weapon (PDW) variants have to a certain extent replaced pistol-caliber carbines and sub- machine guns, many present-day LE agencies across the country still rely on compact pistol-caliber long arms. When short-range work is needed, like across a room, these pistol-caliber weapons offer more controlled fire for more downrange accuracy. A carbine chambered in a pistol caliber translates to less recoil, less muzzle blast and more bullets sent downrange at the intended target.

Stag Arms’ Models 9 and 9T are ARs built from the ground up to use the ubiquitous and inexpensive 9mm while offering the familiarity of the AR platform. ARs chambered in 9mm have been in circulation since the 1980s, when Colt developed the Colt SMG and, later, semi-auto versions for the commercial market. It made sense then and makes sense today, since many operators already know the controls of the M16/AR-15 series.

While many AR manufacturers over the years have offered kits to convert 5.56mm ARs to fire the 9mm, usually
with a 9mm upper and a drop-in magazine block, Stag Arms’ 9mm rifles employ dedicated 9mm upper and lower receivers. The uppers feature heavy-profile, 16-inch, 4140 steel barrels with 1-in-10-inch twist rates. The bores and chambers are chromed, and the muzzles are capped with A2-style flash suppressors. As with all Stag Arms AR-platform rifles, right- and left-hand versions are available.

What also sets these 9mm ARs apart from their 5.56mm or 6.8 SPC counterparts is the operating system. The Models 9 and 9T use a simple blowback system—not a direct impingement or gas piston system like typical ARs. There is no gas block, gas tube nor piston with the Models 9 and 9T. The upper receiver uses a one-piece bolt and carrier with a modified ejection port cover and an enlarged shell deflector. The lower receiver is also different, as it uses an integrated magazine well plus a specially designed hammer, magazine catch and recoil buffer. What remains the same are the AR controls. The safety, charging handle, magazine release and six-position-collapsible stock all function the same.

Also different with Stag’s 9mm ARs are the magazines. They accept standard Colt-style 9mm AR magazines, which are similar to the modified Uzi magazines that Colt used back in the day—straight sticks with double-stacked columns of cartridges. With these magazines, the bolt locks back after the last round is fired.

Stag’s Model 9 features a railed, non-functioning gas block and a Diamondhead VRS-T modular handguard. The Model 9T has a much longer, free-floating, 13.5-inch Diamondhead VRS-T modular handguard as well as Diamondhead’s deluxe, aluminum, flip-up sights. With its full-length Picatinny top rail, the Model 9T offers plenty of room and options for mounting an optic. The handguard is also drilled and tapped at the 3, 6, and 9 o’clock positions so rails can be added where needed for other mission-
critical accessories. The handguard also has several lightening cuts that help dissipate barrel heat, and the bottom and sides of the forend are grooved for enhanced control. The Models 9 and 9T are also available in left-hand configurations, as the Models 9L and 9TL, respectively.

I had the opportunity to test the Model 9T variant and found it was easy for me to adapt to the carbine. Reloading the skinny stick magazine was the only new characteristic of this carbine. Otherwise it is pure AR but with less recoil, less blast and less noise.

A red-dot sight is a natural choice for an AR-style 9mm carbine, so I mounted a Meprolight Tru-Dot RDS with a 1.8-MOA dot reticle that offers rapid target acquisition with both eyes open. The RDS is a low-cost commercial version of the Metro M5 sights used by the Israeli Defense Forces. The RDS is constructed with an aluminum body and a tough polymer frame around the large viewing window. A single AA battery provides thousands of operating hours, and the sight has an auto shutoff capability for additional energy savings. The red-dot reticle has four switchable brightness settings; three for day/night use and one for use with night vision and magnifiers. The unit costs about $400, and it comes with an integral Picatinny rail mount with QD levers. It weighs 10.5 ounces and takes up 4.5 inches of rail space. Once mounted, the RDS was at the exact height needed for an AR.

The Model 9T’s magazine features a steel body with a polymer follower that is molded bright orange so a user can visibly see the magazine is empty when the bolt is locked back. There are also witness holes, and the steel floorplate is easy to remove for maintenance. I acquired three additional sticks from Brownells since I wanted to try some fast reload drills with the 9T. The Brownells magazines were made of steel with steel followers, and they had a slick Xylan coating for smoother operation. All of the magazines held 32 rounds. Manipulating the stick magazine into the Model 9T’s mag well required a bit of re-training because the magazine is so long. I performed reloads by grabbing the magazines in the center with my index finger extended—just as I would with a pistol magazine—to orientate the front of the magazine into the Model 9T’s beveled mag well. I then pushed the fresh magazine home and tugged on it to ensure it was properly seated before running the bolt as I maneuvered my support hand back to the handguard while getting back on target.

Less overpenetration is a benefit of the 9mm, but most operators know that swapping out ammo in a compact 5.56mm AR achieves similar results. Using 9mm ammo, however, means I can run my carbine with the same ammo I use in my full-sized and compact handguns. I like the idea of being able to swap ammunition between my carry pistol and the Model 9T. I loaded all four magazines with Winchester’s “White Box” 115-grain FMJs, Hornady’s 115-grain HAP rounds and Atlanta Arms’ 147-grain FMJs.

Some older 9mm ARs were known for being unreliable thanks in part to the way they were made and inferior magazines. I have a few pals who could not say enough bad things about some of the older 9mm AR magazines. I was not jaded by their comments, however, and after running the Stag Arms and Brownells magazines through the Model 9T, I had to disagree with them. I had absolutely no issues with the Model 9T, and I ran it hard right out of the box, with numerous tactical reloads and bolt-lock reloads. The extra packing lube in the action cooked off with continuous shooting. I allowed magazines from bolt-lock reloads to hit the deck. Like I said, there wasn’t a single issue.

The Model 9T uses a single-stage trigger with an average 5.9-pound pull. There was a slightly perceptible amount of creep before it broke. I liked the trigger, and my accuracy downrange served as proof. Resting the Model 9T, I was able to get some nice groups. The best five-shot group, measuring 0.75 inches at 25 yards, was produced with the Winchester FMJs. Firing rapidly off-hand, the groups opened up to about 4 inches on average with all of the ammo tested. Loading one, two or three rounds in the four magazines allowed me to practice bolt-lock reloads with the sticks.

The Meprolight sight was fast on target using both of my eyes. Even in the bright noon sun, I could easily acquire the red dot. The Tru-Dot RDS suited the Stag Arms Model 9T well. The sight also co-witnessed with the all-metal Diamondhead sights. These flip-up sights use Diamondhead’s proprietary diamond-shaped aperture. Turning off the red dot, I flipped up the sights and ran a few drills with just the sights. The other Diamondhead enhancement, the modular VRS-T handguard, is slim in hand and offered a secure grip without any sharp edges.

Pistol-caliber carbines are an American tradition. In the Old West, cowboys favored long guns that were chambered in the same caliber as their revolvers. That way they didn’t have to carry two types of ammo. This logic still makes sense today, and the Stag Arms Model 9T is an ideal partner for your 9mm pistol. 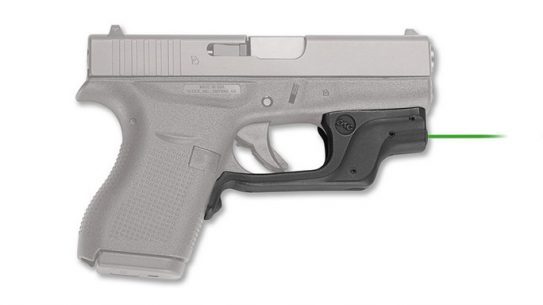