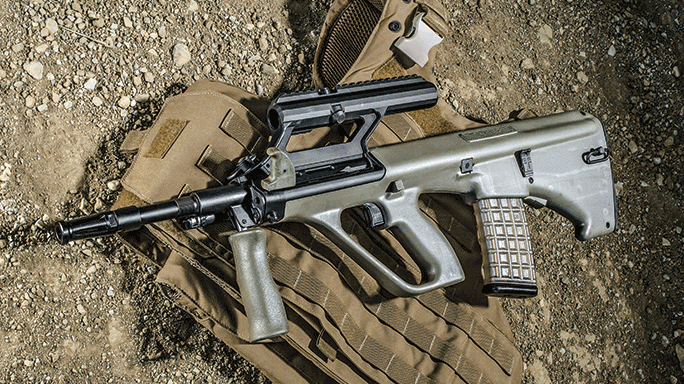 1 of 7
Steyr Master: Steyr Arms’ Aug/A3 M1 Bullpup
After 38 years, the cutting-edge AUG is still turning heads. The new AUG/A3 M1 bullpup is available with rails for adding optics or an integral 1.5X (shown) or 3X sight built into the carrying handle. 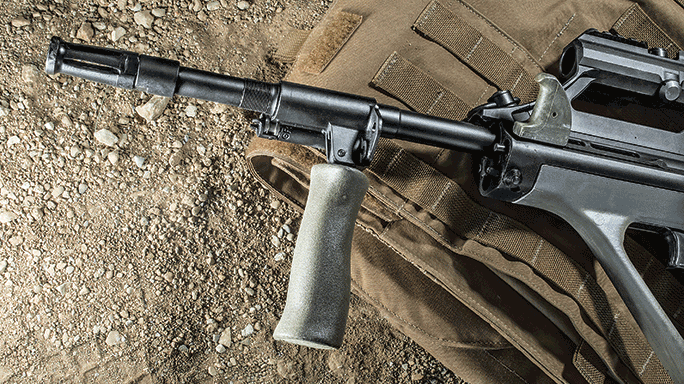 2 of 7
Steyr Master: Steyr Arms’ Aug/A3 M1 Bullpup
The barrel assembly, with its foregrip, is easily removable with the press of a button and a twist. By swapping out barrels, the same rifle can render service in several roles. 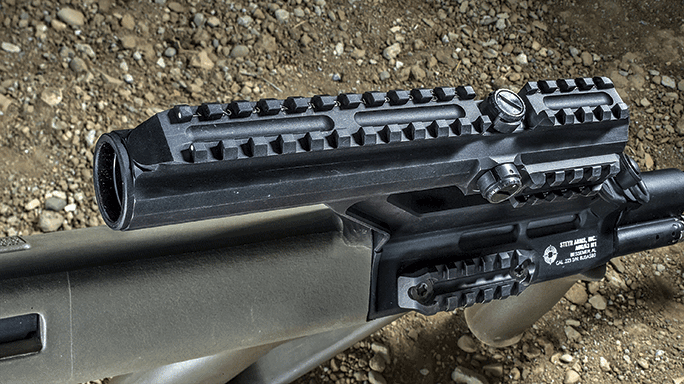 3 of 7
Steyr Master: Steyr Arms’ Aug/A3 M1 Bullpup
The integral 1.5X or 3X optics come with rails on top for miniature reflex sights or other accessories. The sights are easy to adjust with a coin or cartridge case. 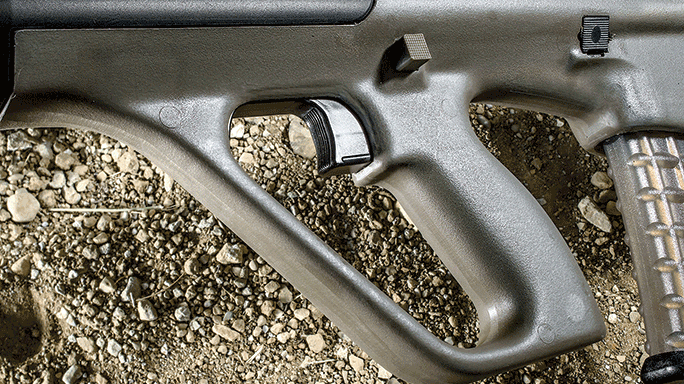 4 of 7
Steyr Master: Steyr Arms’ Aug/A3 M1 Bullpup
The safety is a simple crossbolt, and the trigger connects to the fire control group via a long linkage. 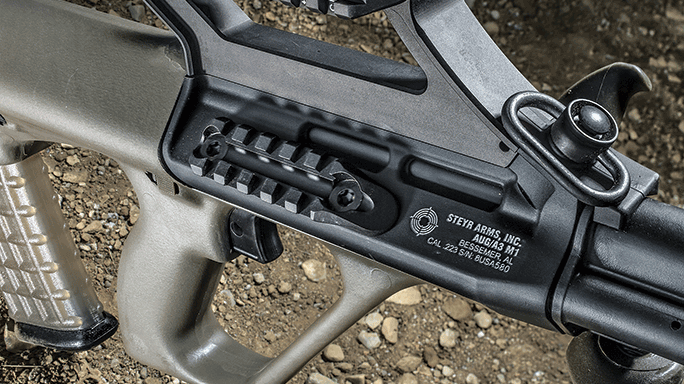 5 of 7
Steyr Master: Steyr Arms’ Aug/A3 M1 Bullpup
The AUG/A3 M1 comes with a quick-detach front sling swivel just ahead of the carry handle. Also note the offset accessory rail included on the right side. 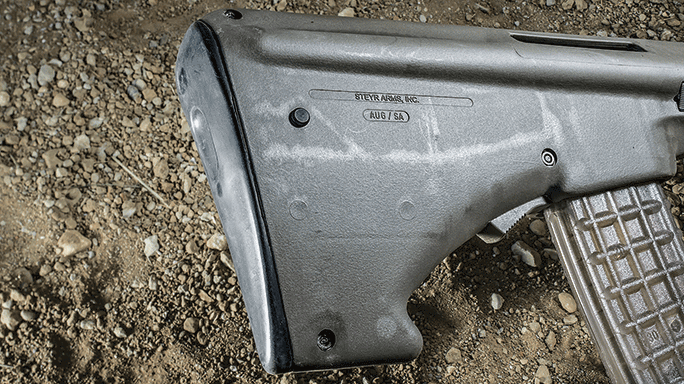 6 of 7
Steyr Master: Steyr Arms’ Aug/A3 M1 Bullpup
The magazine release is located just behind the rear of the magazine, making it easy to remove empty magazines with your support-hand thumb. 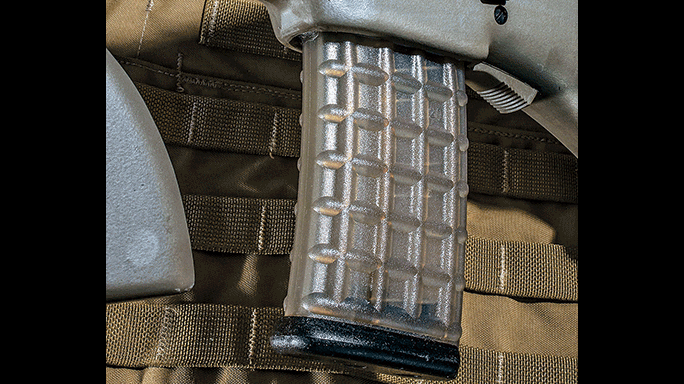 7 of 7
Steyr Master: Steyr Arms’ Aug/A3 M1 Bullpup
The AUG/A3 M1 uses 30-round magazines made of translucent polymer, making it easy to see how much ammunition you have left. 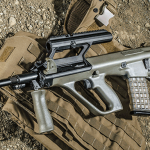 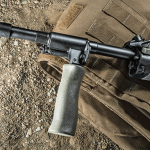 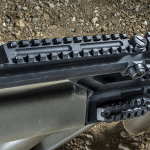 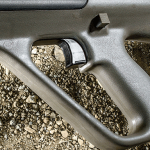 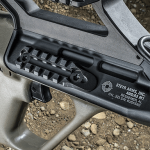 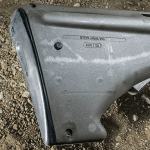 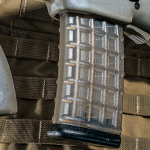 In 1977,  Steyr introduced the Armee Universal Gewehr, or AUG, a groundbreaking bullpup rifle so innovative and revolutionary that it remains at the forefront of small-arms technology even today, some 38 years later.

Originally known as the StG 77 in military parlance, the Steyr AUG melded space-age materials science with never-before-imagined ergonomics to yield an infantry rifle unlike any other previously developed or deployed. Combining the compact footprint and long barrel intrinsic to a bullpup chassis, the AUG maneuvers indoors and within vehicles like an HK MP5, yet works well at distance like a conventional infantry rifle.

While originally adopted for Austrian Army service, the AUG also served in the militaries of Argentina, Australia, Bolivia, Ecuador, Ireland, Luxembourg, Malaysia, New Zealand, Oman, Pakistan, Saudi Arabia and Tunisia as well as U.S. Immigrations and Customs Enforcement. The military rifle is built under license in Australia and Malaysia while the newest civilian variants hail from Bessemer, Alabama, where they’re born at Steyr’s state-of-the-art production facility.

The StG 77 gets its name from the world’s first true assault rifle, the World War II-era StG 44. The StG 44 changed everything about small arms and infantry combat, and all modern military rifles and their offspring glean at least a bit of their fundamental

DNA from that original Sturmgewehr. The StG 44 fired an intermediate 7.92x33mm cartridge from a 30-round magazine and was capable of both semi-auto and fully automatic fire.

The term “bullpup” has obscure origins but dates back at least to the earliest days of the 20th century. The basic concept simply means that the action of a firearm is placed in the buttstock, behind the trigger. Thus configured, a bullpup rifle can remain short and maneuverable while retaining a respectable barrel length. As the effectiveness of today’s lightweight military rounds is wholly dependent upon high velocities that are themselves dependent upon barrel length, retaining a decent bit of barrel is critical to the bullet’s downrange performance.

The price you pay for the bullpup concept rests typically in ejection difficulties and mushy triggers. Physics demands that a side-ejecting rifle will be spitting out cases adjacent to the operator’s face. This is not an issue when firing the rifle right-handed, but should the tactical situation demand that the weapon be used from the opposite shoulder, hot empties will zip right into your face. In the case of the AUG, switching to left-side ejection involves a simple bolt exchange and removal/reinstallation of a plastic cover over the unused ejection port. Regarding the trigger, the AUG’s is simply well designed. The pull is a bit heavy at just north of 9 pounds, yet it remains crisp and positive enough for good marksmanship even at respectable ranges. Overall, the AUG is magnificently engineered.

One of the revolutionary attributes of the original Steyr AUG was the inclusion of an integral optical sight in the carrying handle. This basic 1.5X combat optic incorporated a simple “donut”-style aiming circle and was designed for use with both eyes open. This groundbreaking sight provided quick target acquisitions at a time when everybody else just mounted basic iron sights.

The new AUG/A3 M1 comes in three distinct variants when it comes to targeting. The 11-slot Short Rail version incorporates a minimalist, optics-ready rail that is low to the receiver for snag-free handling. The 16-slot High Rail elevates the operator’s desired optic for an improved cheekweld.

The Optic version is more akin to that of the original AUG and incorporates either a 1.5X or 3X optic into the swept-back carrying handle. I tested the 1.5X model for this review. The new reticle combines the familiar donut aiming circle with conventional crosshairs for precision. Zeroing adjustments require nothing more than a screwdriver, a coin or a cartridge case. These integral optics have also been upgraded to include three external mounting rails for lights, lasers or whatever else your heart desires. The top rail also sports a pair of dots that work as backup iron sights. A last-round bolt catch and standard sling sockets complete the most recent upgrade.

By choosing the appropriate optics solution and barrel assembly, an operator can set up their AUG for any tactical application. A short tube and some cutting-edge tactical glass like an EOTech holographic weapon sight yield a close-quarters package that brings rifle-grade power to a submachine gun envelope. A longer barrel along with a bipod and a proper precision scope allows the AUG to be used in a designated marksman’s role out to the effective range of the cartridge. The AUG/A3 M1’s bullpup design keeps everything compact and modular throughout.

The manual of arms of the AUG is indeed fundamentally different from that of your familiar AR. However, those who grouse about slower magazine changes in bullpup rifles need to find themselves some legitimate problems to put their complaints in perspective. The thumb of the weak hand finds the magazine release intuitively and empty magazines fall away cleanly. Fresh magazines snake into the magazine well at least as easily as they do on your AR, and the new last-round bolt catch makes dropping the bolt on a full magazine quick and smooth. Depending upon what sort of glass you have perched atop the gun, the charging handle can rap your knuckles if actuated quickly, but the manual addresses this and grasping the handle from the bottom alleviates this concern. I still find it faster than using the classic T-shaped charging handle on my AR rifles.

The safety is a simple crossbolt. Right is “safe” and left is “fire.” The mil-spec guns have a fire selector built into the trigger so that initial pressure yields semi-auto fire while a full squeeze brings full-auto fire. This system was pioneered in the obscure Bergmann MP35 submachine gun used exclusively by the German Waffen SS during World War II and was incorporated in the short-lived Ingram M6 as well. While there is a risk of inadvertently squeezing the trigger all the way back under the pressure of combat, this is obviously not an issue with our semi-auto civilian AUG/A3 M1 variants.

The AUG/A3 M1’s recoil is softer than that of an AR due to the greater mass of the rifle combined with its adjustable short-stroke gas piston operating system, and the superb design of the bullpup’s trigger yields good performance. I printed some surprisingly tight groups just sitting on the ground and propping the tidy little rifle on my knees.

The same rakish lines of the AUG that captivated me in 1988 when I first saw the gun in the original Die Hard movie still convey a timeless aesthetic that can be accurately described as artistically lethal. The symbiotic combination of aluminum and polymer has become de rigueur this deep into the Information Age, but the fact that everybody is doing it now doesn’t detract from the fact that Steyr was doing it from the very beginning. Building upon nearly 40 years of combat cred, the Steyr AUG is still incredibly effective in tight quarters and long distances than just about anything that doesn’t take a tax stamp. 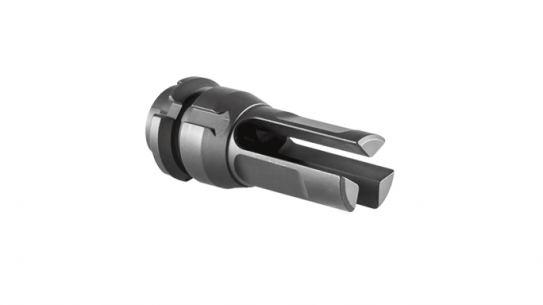 The all new Flash Hider mount from Dead Air Silencers was designed specifically for...