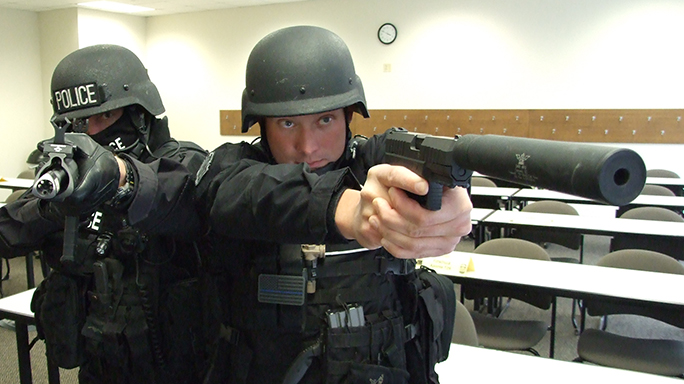 1 of 6
Gun Test: Walther’s PPX SD 9mm Handgun
“… the trigger seemed to be ideal for a pistol that could be utilized for hostage-rescue or dynamic-entry SWAT missions.” 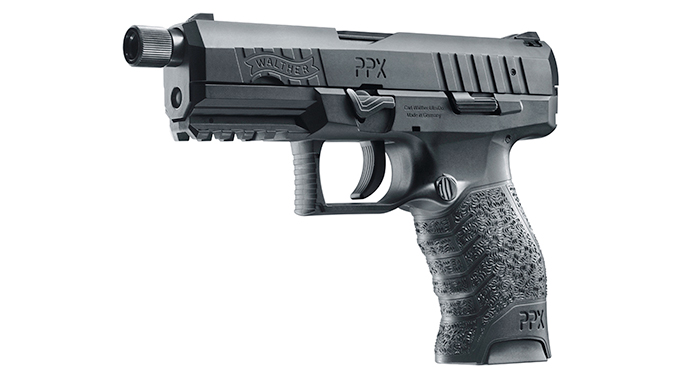 2 of 6
Gun Test: Walther’s PPX SD 9mm Handgun
The Walther PPX SD comes with a threaded barrel for adding a sound suppressor, making it a perfect option for enthusiasts and SWAT personnel. 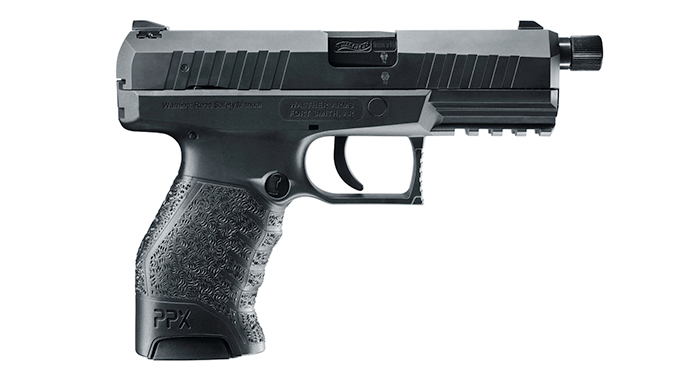 3 of 6
Gun Test: Walther’s PPX SD 9mm Handgun
Note the slide’s wide front and rear serrations as well as the three-dot sights, which have a low profile for a smooth draw. 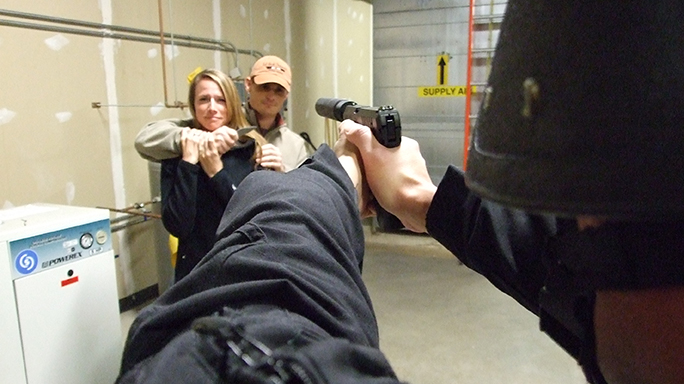 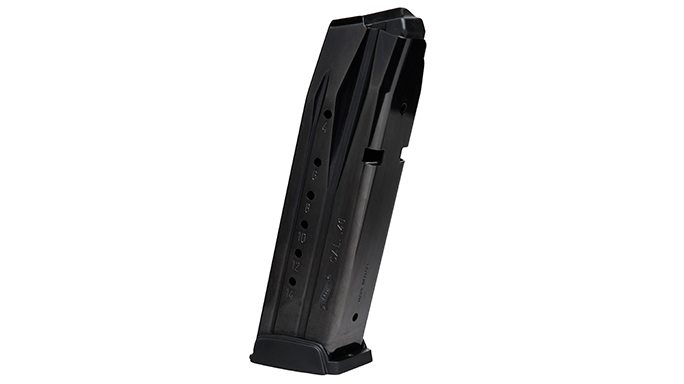 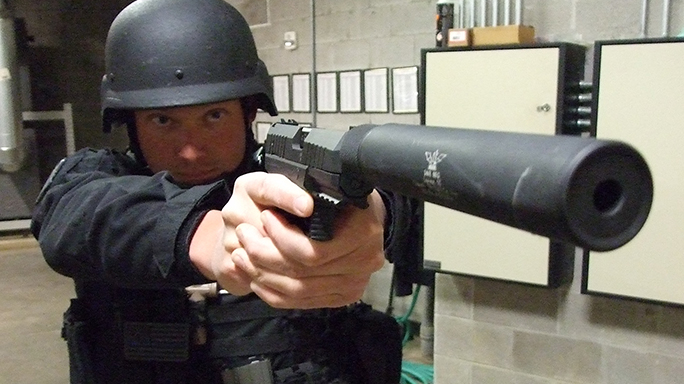 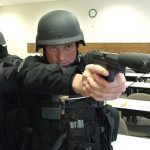 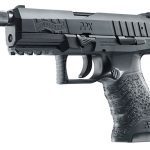 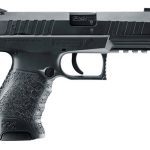 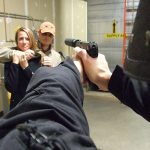 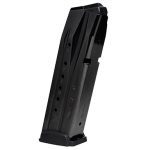 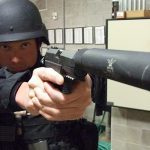 Walther recently introduced several new handguns aimed at the law enforcement market. One of these new pistols is the PPX. Available in 9mm or .40 S&W, the PPX is also available in a threaded-barrel SD version in 9mm, which I received for testing. As soon as I opened the box, I realized that the PPX SD is ideal for hostage-rescue missions.

What do I mean by the term “hostage-rescue” pistol? One of the things our training team learned while setting up and conducting aircraft hostage-rescue scenarios at the 727 Counter-Terror Training Unit was that, in the close confines of tubular spaces like aircraft, where the hostages and hostage-takers can co-mingle, the use of even short-barreled, shoulder-fired arms could be problematic. While we would have a couple of officers enter with ARs to serve as “long cover” during the training, most of the entry guys used their handguns. The majority of the time that I was on SWAT, I preferred my duty handgun to a rifle for entries. I was confident in my ability to deliver accurate and effective rounds with it, especially in the tight spaces one normally finds oneself in when entering houses or apartments.

A hostage-rescue pistol then is one that is absolutely reliable and can place tight groups of rounds accurately and quickly into the head area of a human silhouette target. The most effective target area is roughly between the eyes, or as close as you can get to it. A capable hostage-rescue pistol is controllable enough so that the fear of striking an innocent with a stray round is very, very small. Small enough that the risk is outweighed by the immediate need to end the situation the hostage-taker has caused.

Featuring a steel magazine with a 16-round capacity in 9mm, the PPX SD is a departure from the slightly more compact PPQ that I previ-ously reviewed, in that the former is a hammer-fired pistol rather than being striker-fired, like the latter.

The hammer system on the PPX SD is not what I consider a traditional hammer-fired system, either—you cannot cock the hammer by pulling it back. It is recessed in the rear of the slide so that the hammer can travel through its arc, but there is no spur, or need for one, since the trigger pull is light. The hammer travel is part of the trigger cycle, and the hammer is only controlled by the trigger.

Also unlike the PPQ, there is no trigger safety lever on the PPX SD. The PPX SD’s trigger face is smooth and flat, which is conducive to good control. The really unique part of the trigger cycle and action is that Walther rates the overall trigger pull of the PPX at 6.5 pounds, and I suppose it might be if you count the initial take-up as part of the pull measurement in a complete stroke. There is about a half-inch of take-up in the trigger before the hammer begins to engage and move back. But, if you take up the slack to the point where the hammer will start to roll back beyond the rear of the slide, pause and then complete the stroke, the remainder of the stroke is in the 3-pound range. That is because the automatic safety mechanisms are disengaged as the slack is taken up, leaving only the very short hammer arc and fall. There is no repeat-strike capability, and the hammer is only cocked by movement of the slide—either manually or during the firing cycle.

What I like about this type of hammer system is that it gives you a visual indicator of where you are in the drawstroke when a controlled, accurate shot is called for—one that must, without fail, fall in between the “running lights” of a hostage-taker and not endanger the hostage.

Other details of the PPX SD are fairly standard for modern Walther semi-automatic pistols and are what is expected on a modern duty pistol. Although the Walther website says that the slide release is ambidextrous, the slide release on my -sample was located on the standard side for right-handed shooters with no capability of being reversed. However, the magazine release button can be reversed to better accommodate left-handed shooters. The slide has both front and rear cocking serrations, although I don’t use front serrations—they put your hand too close to the muzzle when “press checking” to see if there is a round in the chamber. In order to assist with ascertaining if the chamber is loaded (or at least if there is a cartridge case in the chamber) there is a loaded-chamber viewport hole drilled into the barrel hood. Unlike other pistols in Walther’s and other manufacturers lines, there is no capability for adjusting the grip’s backstrap. Even if there had been a way to do so, I wouldn’t have changed the backstrap. The grip is ergonomic, comfortable and fit my hand fine. I think most users will feel the same way.

The polymer sights are in a three-dot configuration. In my experience, polymer sights hold up just fine and do not rust. The rear sight is drift adjustable for windage.

While the front of the triggerguard is not recurved, as was popular in the 1980s and 1990s, its flat face is serrated in case you like to put your weak-hand index finger on it while firing. It’s not a necessary feature, as most shooters have realized that putting your finger in such a position will pull the pistol and your shots towards your weak side while firing. I personally don’t recommend the technique.

Steel components of the PPX are Tennifer impregnated, which provides the ultimate in rust resistance, as the process goes below the surface of the metal for protection. Tennifer does not wear off, and no pistol that I have owned or used that is treated with it has ever rusted.

A visit to the range revealed no surprises, which is why Walther is at the top of my list in terms of polymer-framed duty pistols. I fired three different types of 9mm loads through it, most from a distance of 30 feet: Sig Sauer’s Elite Performance 124-grain JHPs, ZVS 115-grain FMJs from Century Arms and Hornady’s Critical Defense 115-grain FTX rounds. As I like to do with modern firearms, I pulled the PPX SD straight from the box, wiped off the excess surface oil and began testing it by shooting it over my chronograph. All three loads functioned as expected (flawlessly) with no problems in feeding, extraction or ejection. The Sig Elite ammo registered a high velocity of 1,197 fps and a low of 1,139 fps, yielding an average velocity of 1,170 fps. The ZVS ran a high velocity of 1,148 fps and a low velocity of 1,127 fps, with an average velocity of 1,138 fps. The Hornady Critical Defense was the speed champion with a high reading of 1,227 fps and a low of 1,192 fps. The average velocity for the Hornady ammunition was 1,208 fps. The Sig Elite ammo proved to be the most accurate of the group.

One of the qualities in particular that stood out on the PPX SD was the lack of felt recoil. Yes, I was shooting a 9mm, but in smaller pistols with full-power loads, 9mm recoil is noticeable. Not so with the PPX SD. Its slightly larger polymer frame, combined with its 27.2-ounce unloaded weight, soaks up any recoil that even the hottest 9mm load may generate. I personally prefer the 9mm over the .40 for duty use. While I can handle the .40 with no problem, it generates more recoil, is harder on guns, is more expensive and has not been proven to be substantially more effective against human targets than the 9mm with modern loads. This may explain why the FBI has gone back to the 9mm for duty use from the .40 and the earlier 10mm. If I were only limited for some reason to FMJ rounds like citizens and off-duty cops in the People’s Republic of New Jersey, then I would take the .40 or the .45 over the 9mm, but since I live in Ohio, I can stick with the 9mm.

I started out with some two-handed, slow-fire strings at 30 feet. It took a while to get used to the unique trigger. Understand that the trigger is not a problem, but it is a bit different. In rapid fire, the full-length stroke provides good control and delivers the rounds dead-center into the silhouette like any pistol of this type. But once you learn to “two-stage” the trigger and take up the slack, that’s where the PPX SD shines and its potential as a hostage-rescue pistol emerges. Using that technique, I was able to consistently land quick double-taps at 30 feet within an inch and a half in the center of the silhouette’s head—exactly the kind of control and accuracy one needs in that ultimate moment of truth. It will be particularly important for any user to keep their finger on the frame of the PPX SD until they are ready to shoot.

A fellow officer friend of mine allowed me to use his SWR Trident-9 sound suppressor for some additional testing at a local police department indoor range. The Trident-9 spun onto the threaded muzzle smoothly, and we moved the target down to the 30-foot mark. I did not have any subsonic ammunition available at the time, so we ran the PPX SD with standard Winchester “White Box” 124-grain FMJs. The Trident-9 cut the sound signature down significantly. We weren’t able to take our ear protection off to really check the sound reduction, as there were other officers on the range firing un-suppressed weapons, but I feel our hearing wouldn’t have suffered had we been able to remove our ear protection. There was a bit more noise downrange from the supersonic bullets than there would have been with subsonic ammo. The PPX SD again cycled flawlessly, and its accuracy was unaffected. The officers that tested the suppressed PPX SD—all tactical operators—agreed that the trigger seemed to be ideal for a pistol that could be utilized for hostage-rescue or dynamic-entry SWAT missions.

Would there be anything I would change about the PPX? There are two things. I would put a ridge or a “bump” atop the slide release lever for additional purchase by the thumb or finger when releasing the slide. I would also prefer precision, fully adjustable sights with a single white-dot front sight and no dots on the rear. Other than that, I’m good. In fact, the Walther PPX SD’s MSRP of $425 seems like a steal for such a capable, high-quality pistol. 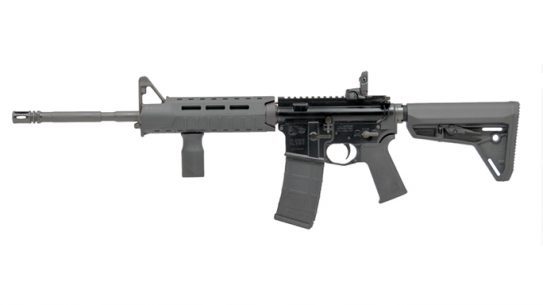