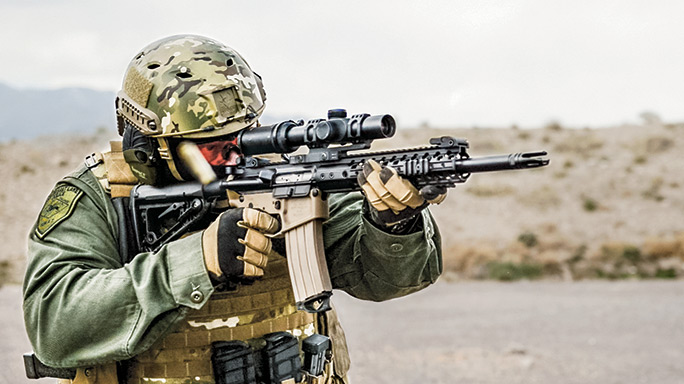 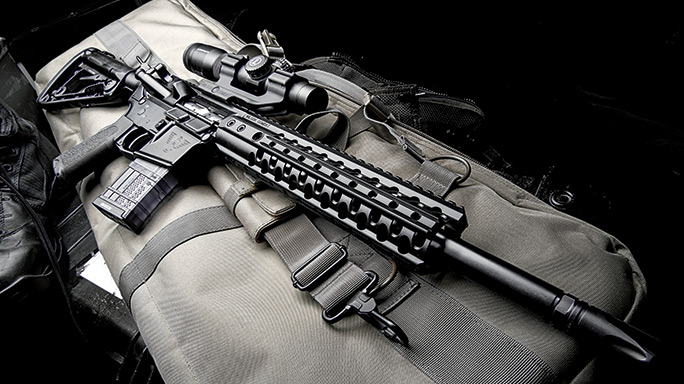 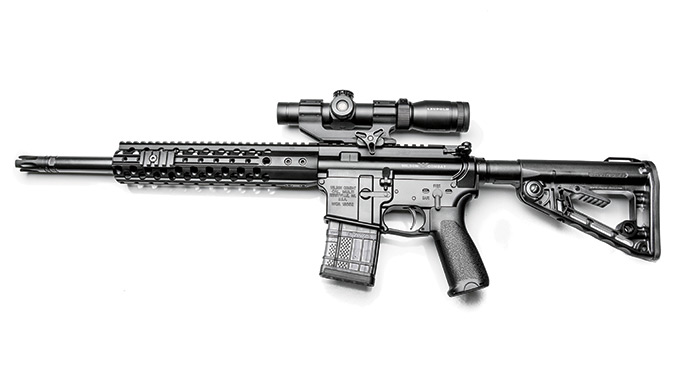 3 of 3
Semi-Auto Hammer: Wilson Combat’s Recon SR Tactical
“Another versatile part of this caliber is its ability to use a wide range of bullets, from 250 to 600 grains.” 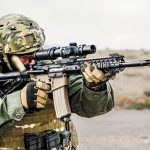 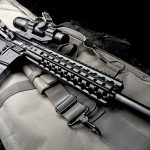 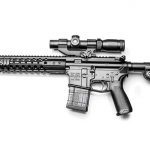 I was introduced to the .458 SOCOM cartridge in 2011, and it quickly became one of my favorites. I tested it in rifles with 10- and 16-inch barrels, and I noted that the .458 SOCOM had some solid tactical applications, and even more far-reaching value outside the typical tactical environment. Using solid-copper bullets, the .458 SOCOM’s penetration was impressive—it stopped a running car engine during testing. Switching to frangible ammunition, it operated admirably as a door breacher while remaining lethal.

Given proper hunting loads, the .458 SOCOM is an excellent round for taking down large animals at close range, making it just about perfect for game wardens or those LE agencies where it’s common to come across dangerous wildlife. The .458 SOCOM is also easy to suppress, and it utilizes mil-spec AR-15 magazines, requiring nothing more than a barrel and bolt change along with some alteration to the receiver’s ejection port.

Over the past few years, I’ve hunted hogs on Bill Wilson’s Circle WC Ranch a couple of times. This ranch has luxury accommodations, thousands of acres for hunting and a dedicated preserve stocked with trophy hogs. Wilson Combat’s Recon SR Tactical, with its 14.7-inch barrel and pinned flash suppressor, is Bill’s go-to weapon on the ranch for hunting hogs. Lightweight, accurate and offering excellent stopping power, the Recon SR Tactical all but ensures a clean kill, even with less-than-perfect shot placement. Wilson Combat’s 300-grain Barnes TTSX ammo, with a listed velocity of 1,800 fps, is devastating on wild hogs.

Working as a police officer in the West often puts you in a position to deal with livestock and wildlife, either of which can prove lethal. Especially where urban environments meet wilderness, you need a compact weapon that is controllable, accurate and delivers serious energy—and the .458 SOCOM fills this need perfectly. Delivering as much as 3,500 foot-pounds of energy (fpe) at the muzzle, the .458 SOCOM retains more energy at 100 yards than higher-velocity rounds and has proven effective on moose and bear out to 150 and 200 yards. And, since the .458 SOCOM is made for the standard AR platform, there’s no need for training on a second weapon profile. Officers can transition easily from their patrol rifles. With the correct bullet, the .458 SOCOM is also excellent for penetrating barriers. In short, the .458 SOCOM chambering provides what are essentially .45-70 ballistics in a lightweight, compact and accurate semi-auto.

Wilson Combat offers .458 SOCOM uppers and complete rifles with three different barrel configurations: A heavy 16-inch barrel, a lightweight 16-inch barrel and the 14.7-inch barrel used on the Recon SR Tactical. I recently tested a Recon SR Tactical upper mounted on one of Wilson’s BILLet-AR lower receivers with a crisp, reliable Tactical Trigger Unit (TTU) installed, which makes for a handy, suppressor-ready carbine with minimal loss in velocity. I also tested the upper on my registered Colt M16A2 lower, which is typical of many agency- issued lower receivers.

My Recon SR Tactical came with a stainless steel, match-grade barrel with a 1-in-14-inch twist rate and capped with a three-pronged Accu-Tac flash suppressor. The forged upper receiver also houses a new bolt as well as an updated bolt carrier group. Surrounding the barrel and gas system is Wilson’s TRIM handguard, which offers QD sling swivel cups on each side and allows users to add accessories where needed while remaining trim and easy to grasp. Wilson Combat’s optional flip-up front and rear sights were mounted as backups. The entire upper receiver assembly was nicely coated in Wilson’s matte black Armor-Tuff finish.

While iron sights or a red dot will work, I prefer low-powered variable optics these days. For this test, I mounted a U.S. Optics 1-8X SR Tactical-8C scope, which features an illuminated red dot in the center of its reticle that can be activated for close-range work. The mil-lined reticle is simple, clean and allows for precise aiming and identification at range. The scope is also compact, pretty lightweight and incredibly rugged.

In previous testing, the accuracy of the .458 SOCOM rifles was ammunition dependent. Most of the hard-cast hunting loads would shoot into a couple inches at 100 yards, about half that at 50 yards. When it comes to real accuracy, the 300-grain solids from Southern Ballistic Research (SBR) were stellar and proved so during this test as well. My best group measured about 1.25 inches at 100 yards. Moving up to 50 yards, the groups were even tighter. Of course, the .458 SOCOM’s strong suit is penetration, as it can go through pretty much anything. Likely the most versatile round, the Barnes 300-grain TTSX was a very close second, creating a 1.35-inch group. Used to great effect at the Circle WC Ranch, it may be the best round for all general-purpose uses, and it’s effective on just about any critter. Every other five-shot group fell between 1.5 and 2 inches.

The Recon SR Tactical’s reliability was excellent. Though non-standard calibers often create reliability issues in AR-platform weapons, the .458 SOCOM is about as trouble-free as it gets. With standard aluminum magazines or Lancer’s polymer AWM magazines, you get 10 rounds as a rule. There is no need to change followers—it just turns your double-stack 5.56mm magazine into a single-stack .458 SOCOM magazine. Magazines like the Magpul PMAG, with channels guiding the bullet 5.56mm tips, can cause problems.

The recoil is noticeable, but not unpleasant. Felt recoil is subjective as a rule, but if I had to make a comparison, shooting the Recon SR Tactical felt like a 12 gauge loaded with practice rounds. Holding the rifle tight in your shoulder pocket is key; if I were to use the carbine all the time, I’d install a stock with more padding. At the end of the day, I certainly felt like I had been firing a rifle with some recoil, but I wasn’t sore.

In my experience, the .458 SOCOM is a pretty flat shooter out to 100 yards. Move beyond that and it drops off pretty quickly—about 5 inches at 150 yards, and even faster after that. This is one of the .458 SOCOM’s strengths when it comes to urban environments. Unlike a magnum, it is not going to continue out to 600 yards unless you are aiming at the moon. Its sweet spot, especially with the Barnes TTSX, is inside 100 yards, with 200 yards being its limit.

Another versatile part of this caliber is its ability to use a wide range of bullets, from 250 to 600 grains. Heavy bullets remain subsonic, making it pretty quiet in general, more so when suppressed. Lighter bullets like the 250-grain versions can reach over 2,000 fps, delivering almost 3,500 fpe at the muzzle. You really can get ammunition for just about any conceivable need within the range limitations of this caliber.

Testing the .458 SOCOM was fun, and the Recon SR Tactical is a very versatile rifle. While its best use is likely against large game wandering into town, it would also be a fantastic breaching tool. Loaded with SBR’s 500-grain frangible ammo, it would make short work of door locks and hinges and is much easier to use than a pump shotgun.

Several agencies in Alaska, as well as several wildlife agencies, are using this caliber to great effect. It is proving capable of stopping moose, bear and other large animals when needed without the drawbacks of a high-powered rifle. It is proving to be a real hog hammer for many hunters. One thing is for sure: The Recon SR Tactical is a handy rifle that fires a big bullet delivering one heck of a wallop, and that is seldom a bad thing! 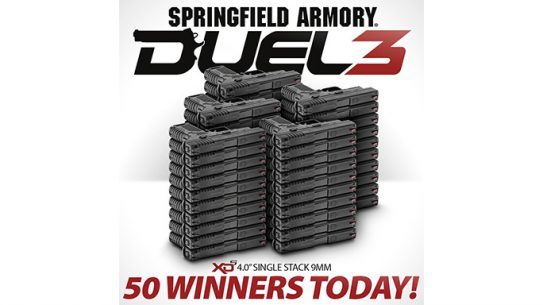 Springfield Armory Giving Away $26K Worth of Handguns Wednesday

As a part of Springfield Armory's DUEL 3 promotion, 50 lucky winners will receive...