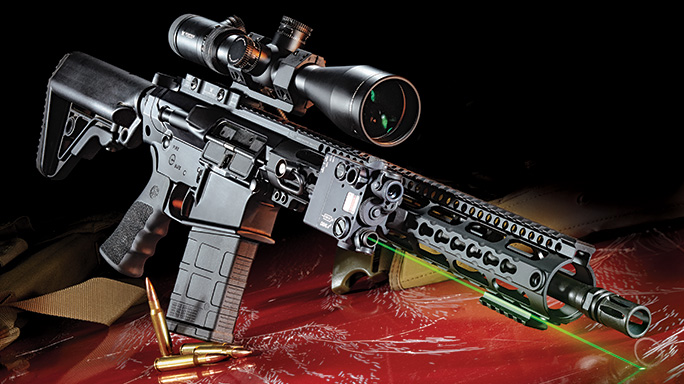 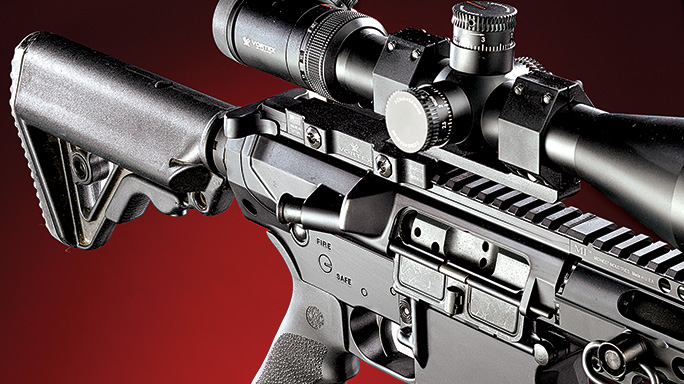 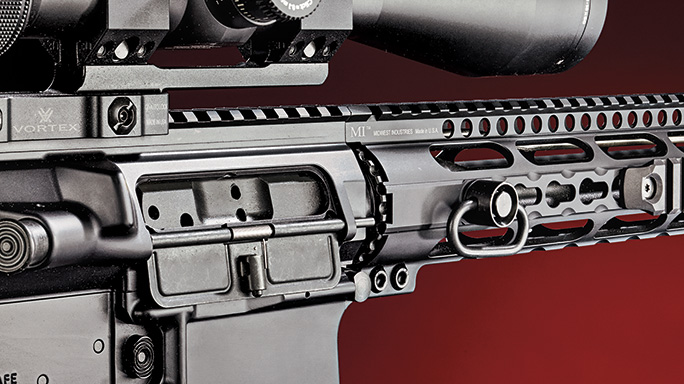 3 of 6
Gun Test: Windham Weaponry’s R16SFST-308 Rifle
For top-notch durability and reliability, Windham outfits the R16SFST-308 with a bolt made from Carpenter 158 steel. 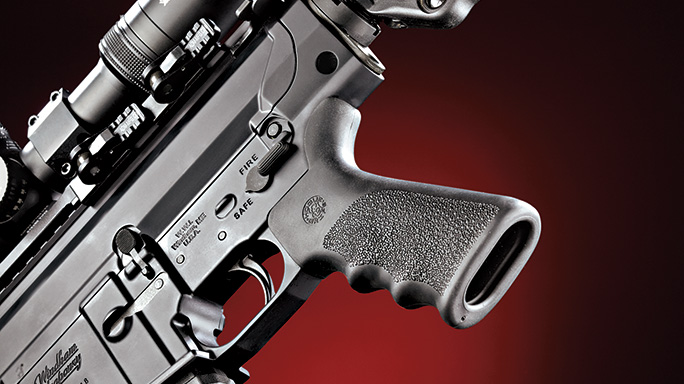 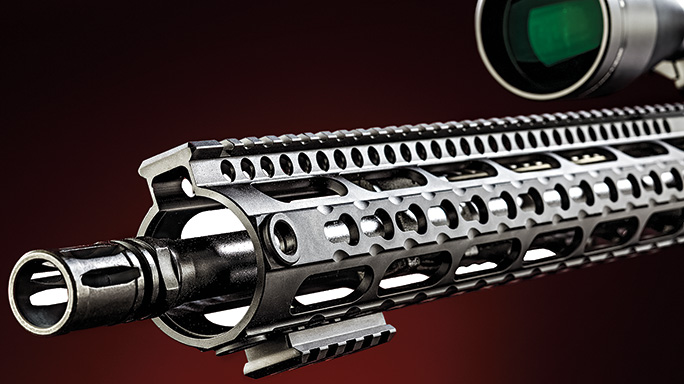 5 of 6
Gun Test: Windham Weaponry’s R16SFST-308 Rifle
The Midwest Industries forend sports a long top rail with KeyMod slots along the sides and bottom for accessories. 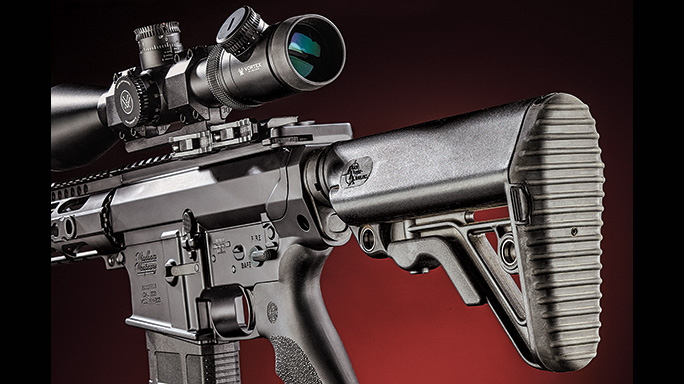 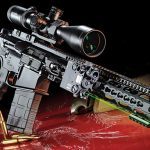 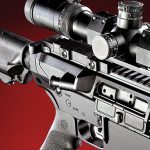 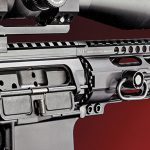 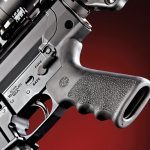 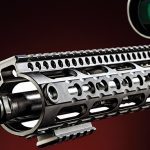 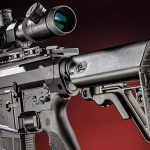 The rise of the .308/7.62mm NATO AR continues, with new models hitting the market regularly. Just like 5.56mm NATO rifles, as
new and better models arrive, the prices are only getting better. Of course, this opens the market to more buyers. Many want a simple rifle that is reliable, accurate and durable, and in law enforcement, these criteria are essential.

For many agencies, 5.56mm ARs are fine, but some want more power and range. The .308 /7.62mm fits this bill nicely, as it’s been used in precision rifles for decades and there are dozens of proven ammo loadings on the market. Lately, demand has spiked for a 16-inch-barreled 7.62mm AR suitable for use as a patrol rifle. This would make a rifle short enough for work in an urban environment while remaining effective out to 500 yards and beyond—all while providing substantial firepower. The rifle also needs to be accurate, but its reliability with standard duty ammo is absolutely paramount.

Optics and red-dot sights are all but mandatory these days, so the rifle needs to accommodate them. And what about a handguard that accepts accessories like lights, lasers and slings without being too bulky? It looks like Windham Weaponry has answered the call.

The new R16SFST-308 is a no-nonsense direct-impingement rifle chambered in 7.62mm NATO, meaning it can use both .308 and 7.62mm NATO ammo. The upper and lower receivers are forged from 7075-T6 aluminum, and the upper houses a 16.5-inch, 4150M chrome-moly-vanadium barrel with a chrome-lined bore and chamber. Its 1-in-10-inch twist rate will stabilize a wide range of bullets. The muzzle sports an A2-style flash suppressor.

The bolt is made from Carpenter 158 steel for maximum strength and reliability. Surrounding the barrel and mid-length gas system is a Midwest Industries 15-inch KeyMod handguard. Along with a full-length Picatinny rail at 12 o’clock, rails and accessories can be mounted as needed along the sides and bottom. Quick-detach (QD) sling cups are included at the 3, 6 and 9 o’clock positions at the front of the handguard as well as on the left and right sides at the rear.

The lower receiver features a beveled magazine well and an integral triggerguard. A Hogue OverMolded grip is installed along with a six-position commercial buffer tube. A standard (short) DPMS-style buffer is used. The adjustable buttstock features Windham Weaponry’s logo and a sling loop at the heel. More sling-mounting options include the QD sling cups built into the rear of the lower receiver on both sides.

All of the controls, including the safety selector, charging handle and trigger, are standard AR fare, and the R16SFST-308 will accept many aftermarket triggers. My test rifle arrived in a hard plastic case with one 20-round Magpul PMAG, two short KeyMod accessory rails and a sling with a QD swivel.

For sighting, I added a U.S. Optics SR-8 1-8X scope with an illuminated Horus H50 reticle. At 1X magnification, this scope can be used at CQB distances yet facilitates wind and elevation holds at longer distances. An Alamo Four Star QD mount held the scope solidly in place and ensured the scope retained its zero after being removed and reattached.

I also replaced the standard stock with a Rock River Arms Tactical CAR stock, which provides a small buttpad, a wide cheekweld and numerous QD sling-mounting positions, and added a Blue Force Gear Vickers sling to carry the rifle and shoot from several positions. Along with the included PMAG, I used some Brownells aluminum .308/7.62mm AR magazines.

Accuracy is certainly important in a patrol rifle, but never at the expense of reliability. Having tested dozens of 7.62mm ARs over the years, the accuracy of most rifles has improved exponentially. Many standard rifles today are more accurate than precision rifles of yesteryear. Reliability? Not so much, as some will simply not run certain types of ammunition. Law enforcement agencies primarily issue ammunition ranging from 155 to 175 grains with either a polymer-tip or open-tip match (OTM) bullet, so this rifle needed to run them all—and it did.

Testing started with the two Brownells magazines loaded with Black Hills’ 155-grain A-MAX ammunition, my preferred duty load. I also used magazines from Magpul, Lancer, LaRue Tactical and DPMS loaded with ammunition ranging from old Federal 125-grain rounds to 175-grain OTMs and 180-grain AccuBonds. Each contained 10 rounds and was lined up on a table. They were all fired at a moderate rate at a 15-yard target from off-hand, pausing only long enough to reload. There wasn’t a single malfunction, and all of the shots fell into an 8-inch cluster. Just as importantly, the ejection pattern was very consistent, creating a rather large pile of cases at about 3 o’clock. Wearing tactical gloves, the handguard did get a bit warm but not uncomfortable given about 100 rounds fired at a steady pace. From a practical perspective, the R16SFST-308 ran the ammo at a pace and quantity exceeding most practical law enforcement conditions.

The R16SFST-308’s accuracy was excellent, especially with the 175-grain match loads. Barnes’ new Precision Match 175 OTM produced the best group, which measuring just a bit over an inch at 100 yards. Fired from prone and using a bag as a rest, there was some consistent vertical stringing on my part, but this replicates real-world engagements. Sure, you can use a bipod on a patrol rifle, but you’re more likely to rest the rifle against a barricade, bag or other naturally occurring support. If a bench presented itself during an active-shooter situation, my guess is this rifle would shoot sub-1-inch groups all day long.

Since agencies choosing this caliber may need to make shots at longer ranges, I tested this rifle out to 400 yards. Once zeroed, I used my Applied Ballistics Kestrel was for appropriate holds at 150, 200, 250, 300, and 400 yards. I then engaged 8-inch, steel IPSC silhouettes targets every 50 yards and “walked” my way out to 400 yards. I only missed due to wind at 300 yards. Given a steady 15- to 20-mph wind, that wasn’t bad at all, at least for me. In the real world of law enforcement, the R16SFST-308 was more than accurate out to 400 yards using the Horus H60 reticle for holds.

For most of the range testing, I used Gorilla Ammunition’s 175-grain SMK ammo Loaded using Federal Brass, Sierra MatchKing bullets and match primers, it is proving very accurate. I’ve tested it in several rifles now, and it consistently performs well, including in the Windham R16SFST-308. Given their popularity with LE agencies, I also used Hornady’s 168-grain TAP and Black Hills’ 155-grain A-MAX. Both did well on steel, and the Hornady load was a bit more accurate during group testing.

Weighing in at 7.65 pounds unloaded, this rifle is pretty light. It was easy to move around the range and carried well when slung. It was plenty handy working around my truck and on barricades and other obstacles. Compared to heavier rifles, the recoil was a bit stout, but that’s just physics. There are a few muzzle brakes out there that are considered acceptable for duty use that may prove helpful.

The supplied sling is simple and designed for use with the A2 stock sling swivel; move to another sling and you will need a second QD swivel. You can use the cups at the rear of the receiver, and the extra mounts at the front of the handguard were a nice touch. My preferred carry method attaches the front of the sling at the rear of the handguard. This makes the rifle carry close to the body so it won’t swing around and interfere with gear as much. If I am trying to get steady with the sling, or it is behind my back, the forward position is advantageous. This setup gives you plenty of options.

The MSRP of the R16SFST-308 puts it in the lower quadrant of the .308/7.62mm AR pack. You get a solid performer for the price. In fact, the R16SFST-308 ran better than some rifles I’ve tested with price tags much higher. It was completely reliable with excellent accuracy. If you are looking for a patrol rifle in .308/7.62mm NATO, this is a fantastic choice. 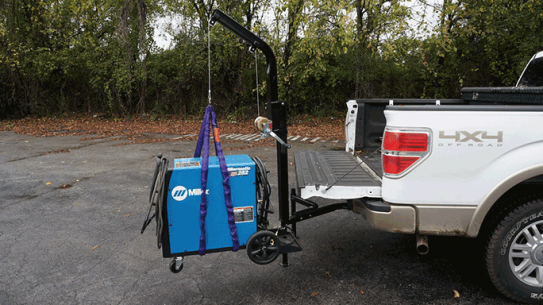 The all new Rack Jack Magnum from Viking Tactical is a portable, hand-winch powered...