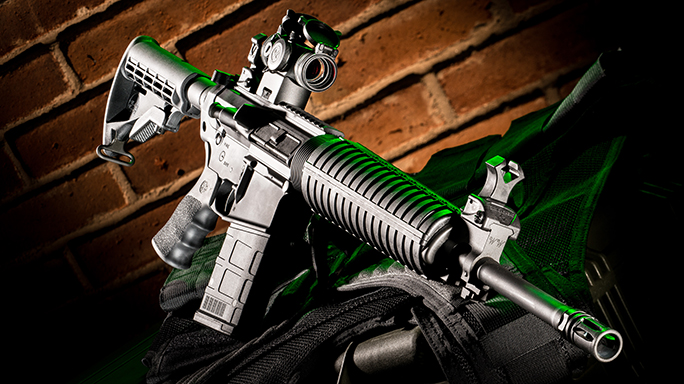 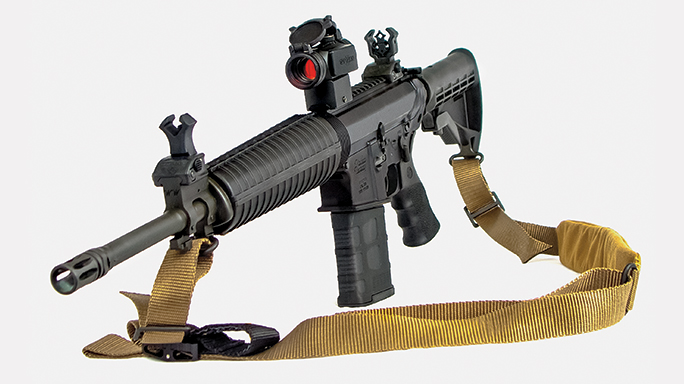 2 of 6
Gun Test: Windham Weaponry’s SRC-308 Carbine in 7.62mm
The gas block is positioned so its top rail lines up with the flatop upper’s. Also note the sling loop. 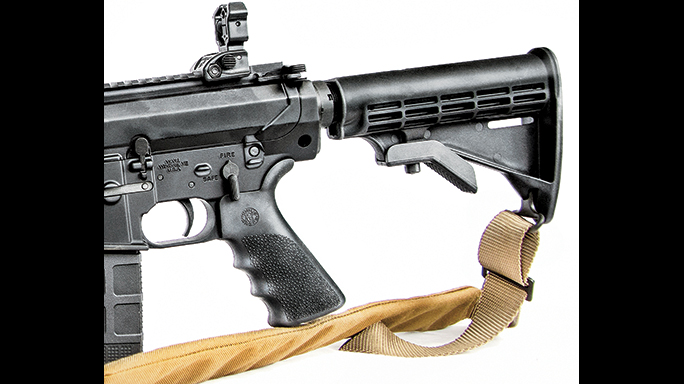 3 of 6
Gun Test: Windham Weaponry’s SRC-308 Carbine in 7.62mm
The SRC-308 has traditional AR-style controls and a few enhancements, such as a Hogue pistol grip. 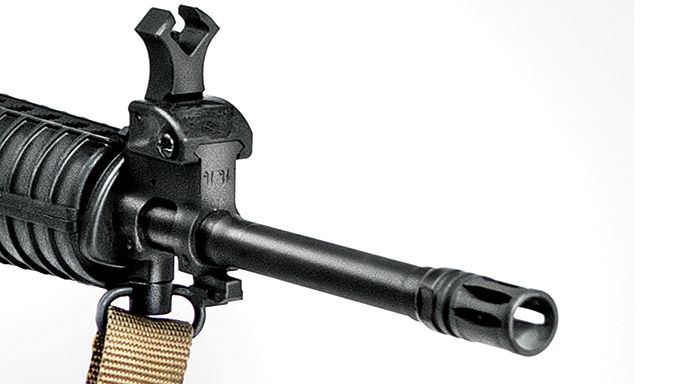 4 of 6
Gun Test: Windham Weaponry’s SRC-308 Carbine in 7.62mm
The gas block is positioned so its top rail lines up with the flatop upper’s. Also note the sling loop. 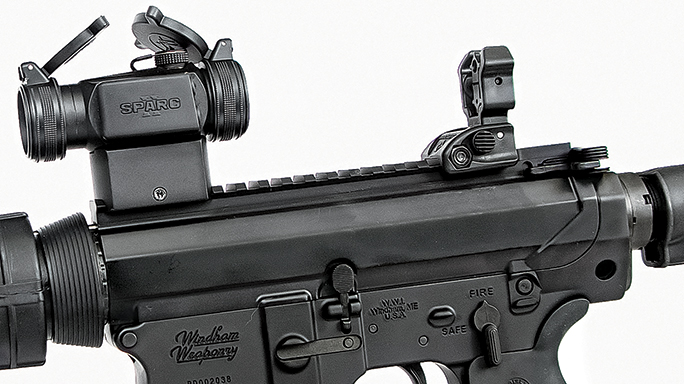 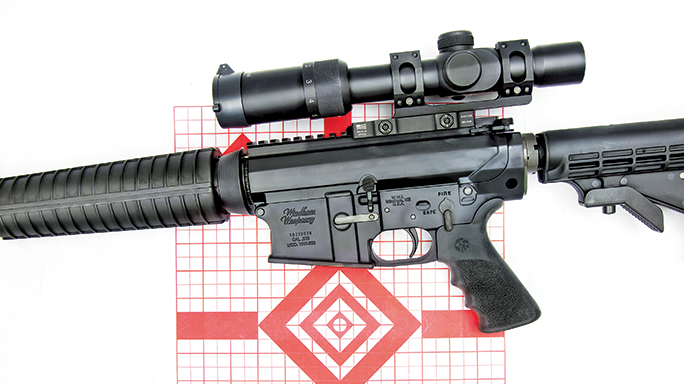 6 of 6
Gun Test: Windham Weaponry’s SRC-308 Carbine in 7.62mm
At the range, the SRC-308 produced tight groups and ran reliably with every load tested. It’s more than accurate enough for most shooters’ needs. 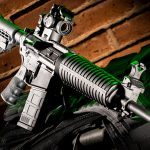 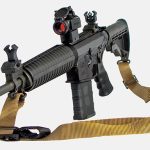 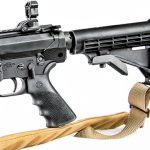 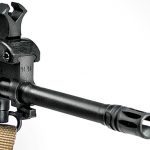 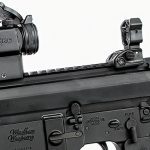 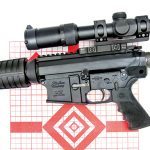 I am a big fan of firearms delivering serious “effectiveness” on target. I’m not talking 9mm versus .45 ACP here—we all know defensive handgun rounds leave a lot to be desired in the effectiveness arena, regardless of caliber. “Thumpers”—shotguns delivering 12 gauge buckshot or slugs, or rifles chucking out 7.62mm NATO or larger bullets—aren’t really pestered by too many poor performance claims.

I accept that the poor performance of the 5.56mm NATO stems primarily from short-barreled military M4s shooting mostly FMJ bullets at highly motivated opponents who may occasionally have body armor. This perfect storm of bad juju seldom occurs during non-military confrontations—seldom—but that certainly does not mean having a thumper around is not a good idea for those in law enforcement. There is always that one suspect who doesn’t realize he is supposed to fall down like in the movies!

Several years ago, Windham Weaponry released its 5.56mm-chambered SRC (Sight-Ready Carbine), which became quite popular. So popular that the company decided to feed it a few steroids to bulk it up, stuff 7.62mm ammunition down its throat and call it the SRC-308.

If you overlook the size difference, the direct-impingement SRC-308 bears a striking resemblance to the ever-popular M4. It should go without saying that the controls on the SRC-308 will function, feel and look the same to those who have spent any time working with an AR—something quite probable in law enforcement, as a large percentage of LEOs spent time in the military.

As the “Sight-Ready” name implies, the SRC-308 features a flattop upper receiver and a same-plane railed gas block, both unadorned by sights. If you want backup sights, they will ride on these two areas, and an optic of your choice can be located on the flattop upper. If you choose to go without backup sights (a serious mistake in my opinion), the optic can be mounted lower, closer to the bore, with no front sight to obscure the view. Low mounting allows a more “down-to-earth” cheekweld.

One of Windham’s goals for the SRC-308 was to keep it light, which isn’t very easy to do with 7.62mm weapons. It was successful, however, achieving an unloaded weight of 7.55 pounds. The first step was trimming the upper and lower receivers down, giving them a distinctive look that is most noticeable when compared to a standard 7.62mm AR. Despite the trimming, as with any other 7.62mm AR, the SRC-308’s receivers are still larger than an AR-15’s to accommodate the 7.62mm bolt and carrier. Windham’s 7075-T6 aircraft aluminum alloy receivers are machined from forgings, and the lower receiver features an integral triggerguard. All of the aluminum alloy parts are hardcoat anodized black.

Additional weight reduction came from using a medium-profile barrel rather than a heavier profile. The SRC-308 features a medium-profile, 16.5-inch, 4150 chrome-moly-vanadium steel barrel capable of handling .308 and 7.62mm NATO cartridges. The 1-in-10-inch-twist bore and chamber are chrome lined, while the exterior wears a black manganese-phosphate finish. The threaded muzzle comes with an A2-style flash suppressor. Surrounding the barrel is a set of M4-style, ribbed and tapered handguards with dual heat shields. Windham’s SRC-308 uses a bolt built from Carpenter 158 steel. The chrome-lined bolt carrier has a properly staked gas key and a black manganese-phosphate external finish.

Although the SRC-308 uses some proprietary parts, it also uses a number of actual AR-15 parts. While shooters cannot swap parts between many 7.62mm and 5.56mm ARs, Windham went to great lengths to alleviate this with the SRC-308: The gas key, gas key screws, firing-pin
retaining pin, hammer, trigger, their springs and pins, the takedown pin, pistol grip and mil-spec receiver extension are all AR-15-type parts. This lets users customize some areas of the SRC-308 with AR-15 parts—stocks and triggers, for instance.

Completing the SRC-308 is an M4-style, six-position-collapsible buttstock with a checkered, hard-plastic buttplate and one of Hogue’s comfortable and effective OverMolded pistol grips made of soft rubber and textured, replacing the less desirable hard-plastic A2 grip.

Another nice touch, Windham Weaponry also gave the SRC-308 three integral quick-detachment (QD) sling swivel connection points/sockets. Two are located on both sides of the lower receiver, near the buffer tube/receiver extension. The third QD sling swivel is located on the bottom of the railed gas block, on the rear leg behind the bayonet lug. QD points make it easy to attach and detach a sling in an emergency. (Especially if you use one of Blue Force Gear’s Rapid Emergency Detachment swivels.) Windham Weaponry ships the SRC-308 with a 20-round Magpul PMAG and a basic sling—all in a padded, hard polymer case.

My labeling the SRC-308 a “thumper” was somewhat prophetic. At 7.55 pounds, the Windham rifle is great for carrying and handling, but it weighs about a pound or two below most other 7.62mm ARs, resulting in a definite thump to the shooter’s shoulder. Not that the recoil cannot be handled, of course—people of every stature do it all the time.

The SRC-308 handled well, smoothly transitioning from target to target. It felt nice to handle a carbine with all of the critical features and no unnecessary extras! I attached an Ares Armor Huskey MK II EWS (Expeditionary Warfare Sling) to the SRC-308 because patrol rifles need a sling for going hands-free quickly. Many hold strong opinions about which is the superior two-point sling tightening systems—cam or slider. With all-metal hardware, the MK II EWS combines the best attributes of both systems.

For CQB drills and range practice, I mounted the compact Vortex SPARC II red dot, which has lots of features and numerous improvements over the original version. The SPARC II is fast on target, and it comes with a multi-height mount system that makes it easy to install. To test the SRC-308’s long-range capabilities from a benchrest, mounted in a Caldwell Lead Sled, I used a crisp, clear U.S. Optics 1-8x28mm SR-8C scope.

Most violent law enforcement encounters occur in low light, so mounting a flashlight is imperative. Officers must identify and assess their targets. Of course, the SRC-308 does not come with a railed forend, so attaching a light is not a straightforward affair. For this situation, a Top Mount Cantilevered (TMC) Light Mount-N-Slot from Impact Weapons Components would work perfectly. All of the worthwhile additions did not really affect the SRC-308’s weight appreciably.

The Windham SRC-308 handled each tactical exercise with ease. Follow-up shots might have been slightly slower than with a 5.56mm NATO AR-15 but in all practicality would make no difference. In the accuracy department, Windham Weaponry’s SRC-308 performed quite well, hammering targets and producing groups in the 1.25-inch range at 100 yards.

Patrol carbines chambered in 5.56mm NATO are the norm today, but there are times when an officer needs a little more power to tackle barricades, vehicles, armored or drugged-up suspects, etc. In those instances, the Windham Weaponry SRC-308 is just the ticket!

Light enough to not weigh an officer down as he or she sprints to and through a structure yet controllable in rapid fire, the SRC-308 will fill the patrol carbine role just fine. The extra weight of a couple of magazines filled with 7.62mm ammo should be nothing compared to the comfort they will provide!

The Windham SRC-308 is an excellent upgrade for any officer’s patrol carbine needs. 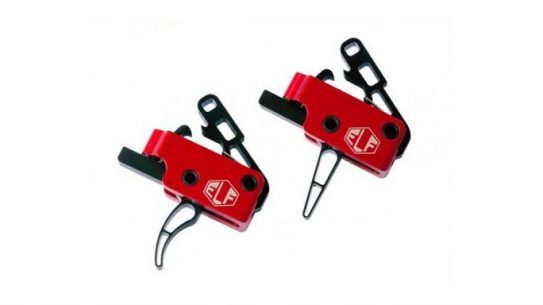 The all new drop-in ELF Triggers from Mounting Solutions Plus allow for an incredibly...