Infantry may be the Queen of Battle and win skirmishes with marksmanship and bravery, but field artillery is rightfully called the King of Battle, because artillery wins battles—and teamwork wins campaigns.

When asked what German infantry weapon was responsible for most Allied casualties, the last item guessed would be the right one—the mortar. However, there was a gap between the maximum useful range of a hand-thrown grenade, about 50 meters, and the 500-meter minimum range of the platoon mortar.

The ability to use of a small amount of propellant to achieve reasonable velocities for large projectiles was first used by the Germans during WWII. The German war industry needed to conserve propellant, so they developed a lightweight cannon that fired a shaped charge mortar shell. The 8cm Panzerabwehrwerfer 600 used a very small amount of power producing high pressure within the shell that was vented off to produce a powerful thrust at al lower pressure. The result was a lightweight launcher whose munition could 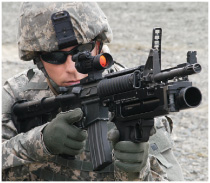 penetrate 5.5 inches of steel at 600 meters, without having the drawbacks of heavy weight and a thick barrel. Although the velocities and range were less compared to a similar shell fired from a hi-pressure weapon, the reduced recoil and simplicity of the launcher made it easy to manufacture and use.

The U.S. Army recognized that concept as tactically significant and designed what became the most successful ballistic development for the second half of the Twentieth century! Together with the breakthrough fusing technology from Picatinny arsenal and Honeywell, the American 40mm hi/lo pressure grenade launcher is the most successful ballistic weapon development in our lifetime. As a result of its success on the battlefield, almost every armed force in the world currently uses a variation of the design that started with the M79.

Ugly and Efficient
Looking like Elmer Fudd’s shotgun, The M79 Grenade Launcher is a single shot, shoulder-fired grenade launcher with break-barrel loading. The low velocity 40x46mm, steel M-406 HE grenade uses centrifugal force to arm the grenade after a flight of about 15 meters. Each grenade sends more than 300 fragments out to a lethal radius of up to 5 meters, precisely where it is needed. As the capabilities of the M79 became obvious, new grenades were developed that included smoke, tear gas and flare rounds. The current family of 40mm grenades includes many stand-off munitions that work best at a distance. However during Military Operations in Urban Terrain (MOUT), CQB or house-to-house fighting, the 40mm with appropriate ammo and technique is still a warfighter’s friend.

Early on, a flechette round with 45 small darts in a synthetic casing and the M576 that was filled with 27 pellets of 00 buckshot were fielded as ambush busters. However, the flechette rounds did not have knock down ability while the buckshot rounds produced low muzzle velocity and did not perform well at longer ranges. Whit Engel of Engel Ballistic Research (EBR) invented and developed a 40mm round that has the ability to place 20 buckshot pellets with a much faster muzzle velocity at six times the range. The Engel round is a high-pressure fixed munition that can be safely used in the low-pressure grenade launcher, because the bore of the grenade acts a barrel.

The EBR 40mm Grenade bodies with a cylinder bore can be loaded and reloaded with slugs, flechette, tear gas, rubber pellets, paint pellets or bean bags. A frangible double-slug cylinder-bore round can be used to breach a door or provide immediate lethal incapacitation capability during MOUT, while a bean bag round can be brought to bear in less lethal Rules of Engagement (ROEs). This kind of munition gives the operator unheard of flexibility, lethality, and versatility.

The stand-alone M79 was followed by the M203 that attached itself to the underside of various infantry weapons world-wide. Several improvements have been made from the original under-barrel launchers to allow for longer munitions and the ability for the launcher 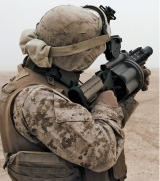 to be used off the rifle with a separate stock and sighting system. Colt, Beretta, Airtronic, HK, LMT and FNH all have improved single shot-grenade launchers that can be used this way.

More Firepower Please
As good as the M79 and under-barrel grenade launchers were as force multipliers, the single-shot grenade launcher always required that the grenadier had to take his eyes off the target to reload. What could be better? How about a repeater grenade launcher?

That is why China Lake Naval Weapons Center, the developers of weapons for U.S. Navy SEALs, designed and built a four-shot pump-action 40mm grenade launcher for SEALs in Vietnam. The SEALs immediately loved the lightweight artillery and carried them on Ops with their Stoners.

Jumping to the 21st Century, SEAL historian Kevin Dockery and Airtronic President Robert Walker, redeveloped and improved the China Lake design to manufacture a four-shot 40mm pump for the next generation of warfighters. Airtronic already makes the M203 and understands the unique success of the 40mm hi/lo pressure system. One of the alterations made to the design is the lengthening of the ejection port to allow for the ejection of larger, unfired rounds. A planned improvement already in the works is a replacement of the wooden stock with an adjustable M4-type stock and pistol grip. Shooting the new pump was pleasurable and easy for any American brought up on Remington and Mossberg pump shotguns. The well-balanced pump 40mm proved very easy to control and quickly resulted in consistent direct hits on a 6-inch steel target and filled the still, Florida air with clouds of M781 practice round orange chalk dust.

High and Low Velocity Rounds
There are two main types of 40mm in service: the 40x46mm, which is a low-velocity round used in hand-held grenade launchers, and the high pressure 40x53mm used in automatic firing mounted and crew-served weapons such as the Mk 19 and Mk 47 40 mm Grenade Machine Guns (GMGs), the Heckler & Koch GMG or the South African Vektor Y3 AGL. The more powerful 40x53mm are linked together with a metallic disintegrating link and fired automatically and the cases are 7mm longer.

Overall, the development of the 40mm launchers and family of munitions have saved untold American lives, while bringing the fight to an enemy who before had a safe zone.