by Terrill Hoffman
in Guns, Rifles
0

0
SHARES
0
VIEWS
Share on FacebookShare on Twitter
Henry’s Golden Boy is the perfect .22 plinker, and its high capacity and accuracy are great for hunting squirrels

We often forget that, as time goes by, new generations are entering the firearm market. Unless they come across Grandpa’s old magazines, they may not realize that there was a time when rifles were made of blued steel and walnut. No doubt about it, we are in the era of black rifles, synthetic stocks and plastic handguns. Another drawback to this modern age is our lack of time to enjoy traditions of the past. Most men will remember their first firearm experience as getting a chance to shoot a .22 rifle under Dad’s or Grandpa’s tutelage. If you proved to be responsible, the next step was an outing of small-game hunting. These are the moments that create traditions and memories to last a lifetime. They are also the moments overlooked in our modern lifestyles.

Fortunately, not all companies have forgotten our heritage and are still producing rifles that look as good as they shoot. Henry Repeating Arms of Bayonne, New Jersey, leads the way. They’re keeping our firearm traditions alive with their modern renditions of the Henry lever-action rifle. The mainstay of Henry Repeating Arms’ lineup would have to be their Golden Boy, and even after a decade of production, this rifle deserves a second look. 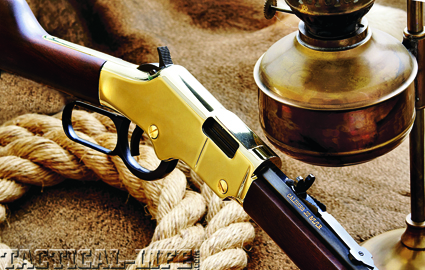 The Golden Boy was named Rifle of the Year in 2001, and was the first rimfire rifle to win this honor. Available in .22 LR, .22 Magnum and .17 HMR, the rifle has the classic looks of the Henry rifle mated with modern production techniques. The steel receiver is finished in Henry’s “Brasslite,” while the barrel band and buttplate are actual brass, which gives an appearance reminiscent of the original Henry rifles of the 1800s. These parts create a nice contrast to the barrel, magazine tube, lever, hammer and trigger, which are finished in a deep, polished blue. The octagonal barrel has a length of 20 inches and the total length of the rifle is 38.5 inches. The stock and forearm are American walnut, and the whole package only weighs 6.75 pounds. As would only be proper for any rifle that would evoke the traditions of the American past, the Golden Boy is 100 percent American made.

Henry Repeating Arms was kind enough to supply a rifle for evaluation chambered in the traditional .22 Long Rifle. In this chambering, the under-barrel magazine tube has a capacity of 16 rounds. During the American Civil War, the original Henry rifles earned the phrase, “Load it on Sunday and shoot all week.” The modern Henry carries on this feature, and could truly be labeled as a high-capacity firearm.

Inspection of the supplied rifle revealed nothing but pure quality. There was not a single flaw to be noted in the fit or finish of the rifle. While the stock and forearm were of a straight grain, the dark walnut had a smooth and sedate finish offset by the mirror polish of the Brasslite receiver. While most rimfire rifles are supplied with grooved receivers for scope mounting, to keep the beauty and clean lines of the Henry receiver intact, this feature was not found on the Golden Boy. Nor will you find the receiver drilled and tapped for scope bases. However, Henry does offer a cantilevered scope mount that mounts directly to the barrel just in front of the receiver.

The standard sights for the rifle are a buckhorn rear sight mated with a brass bead front sight. If you opt for the scope mount, you can tap out the rear sight and the barrel is already drilled and tapped for the cantilever mount. Operation of the rifle is typical lever action. Twist the rod in the magazine tube and pull it out until you can slide the ammunition into the exposed slot. After loading up to 16 rounds, just replace the inner tube and the rifle is loaded. Work the lever once to place a round in the chamber and the hammer is cocked. 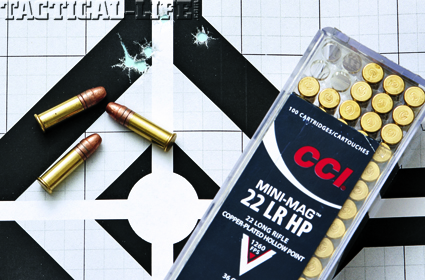 The Golden Boy turned in some good groups with each of the loads tested, but CCI’s Mini-Mags gave the best results.

The only safety on the rifle is the half-cocked notch on the hammer. Lowering the hammer to this point does require you to think about what you are doing to prevent an accidental discharge. In my youth, I was taught to just leave the chamber empty until I was ready to fire. Modern users of a lever-action rifle need to remember that they were designed before the era of product liability. Shooters were expected to have a little common sense and to be responsible for their own actions.

Working the lever on the Henry rifle will bring a smile to the face of any shooter. It is by far the smoothest action I have tried on this type of rifle. The trigger on the sample rifle has a slight take-up and breaks crisply at about 3.5 pounds. One thing to note about the Golden Boy is that it is a full-sized lever action. Henry does offer a youth model that has a shorter barrel and stock, but the test rifle was actually about 0.25 inches longer than my standard Winchester 94.

Anyone can take one look and will have to admit that the Golden Boy is a good-looking rifle. However, to quote Col. Whelen, “Only accurate rifles are interesting.” After gathering a few variations of .22 cartridges, I went down to my range to see how interesting this rifle would be. You never saw John Wayne, Roy Rogers or Hopalong Cassidy using a scoped rifle, and I just couldn’t bring myself to scope this rifle. This type of rifle reeks of tradition, and that is part of the joy of shooting it. That and my old eyes kept all accuracy testing to a distance of 50 yards with iron sights. 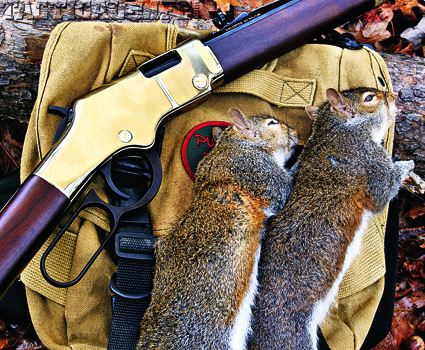 The Henry rifle would be an ideal weapon to use while teaching a young shooter firearm safety.

I started by using CCI’s Stinger hollow points to make sure that the rifle would “hit the paper” and was pleasantly surprised to find that the windage was dead-on. Aiming dead-on at a target with a 5.5-inch bullseye, most shots landed about 2 to 3 inches high with the rear sight in its lowest position. Groups with the Stingers stayed around 1.5 inches. Switching over to the CCI Mini-Mags brought the groups down to about 1 inch and about 1 inch lower. My third cartridge was Remington’s Target 22, which brought the impact point to dead center while keeping the groups in the 1-inch range. I did notice that both CCI cartridges had “expected” velocities printed on the boxes, and both were higher than the actual velocity readings from my chronograph.

After five groups with each loading, I came to a couple of conclusions. First, the Golden Boy is more accurate than I expected. Secondly, the adage that certain rifles will prefer certain loadings is true. The number of .22 rifles I’ve tried over the years has shown me that certain loads will always perform well, but that each rifle will have a certain load it shoots the best. For this Golden Boy, the CCI Mini-Mags had a slight advantage in accuracy over the other two loads tried. Another rifle may have the exact reverse proven. There are dozens of .22 LR loads on the market and you should be able to find just the right load for your rifle. The remainder of my range session was spent playing. Three-inch metal disks at the 50-yard line provided suitable targets for some off-hand practice. The ring of these targets provided an inner satisfaction that can only be found at a rifle range. The sound of ringing the 12-inch plate at 100 yards proved to me that I wasn’t completely over the proverbial hill.