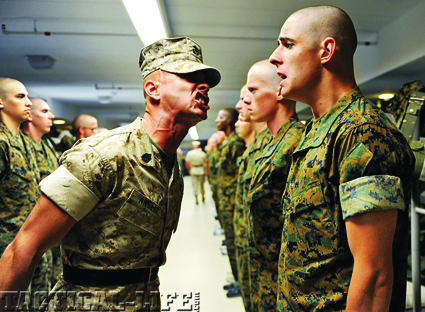 Drill instructors at the Officer Candidate School in Quantico, VA are dedicated to training, educating, evaluating and ultimately turning them into Marine leaders.

The Health Care thing is just another government takeover. They want to take over everything. Do you watch Glen Beck? I recommend that you watch him all the time, because this is the most logical person in America. He digs into stuff, he figures things out, and he airs the bold truth. He doesn’t put up with a bunch of crap. I think he runs circles around O’Reilly. Glen Beck does his homework—he really does the research. He gives you a history lesson every night. See for yourself at www.glenbeck.com.

TW• Some questions our readers have wondered about with your fascinating background include: What was the toughest thing you ran up against in your Marine Corps Boot Camp training?

It was exercise to exhaustion! It’s not legal, never was legal, never will be legal—but back in the day that old Gunnery Sergeant would exercise you, turn you every way, until you couldn’t do any more. The thing is you were so intimidated that you did it until you dropped. I didn’t think it was going to bother me. I was an old farm boy, a tough little guy. I was wiry—hell I only weighed 140 pounds when I went to Boot Camp at 17.

TW• The sergeant that worked you over—you sort of re-created that sergeant for your role in Full Metal Jacket?

TW• Now that they’re re-releasing Full Metal Jacket in a new DVD and Blu-Ray, we were wondering if you could add another Stanley Kubrick story to the one you told us about him rolling his wife’s Mercedes into the ditch while scouting a shot location.

As I said, Stanley was not a multi-tasker. I was very close to Stanley. We worked shoulder-to-shoulder every day for 14 months. One of the things Stanley never did, which almost all the directors and producers do today, is to “loop,” that is go to the ADR, the Audio Dubbing Room, and re-record the voices and sound track over the original photography. If the voices and sound were not just as impeccable as the photography—like a plane flew over or something fell in the background—we had to do it over again. That led to a lot of different takes.

He thought that when the actors went back to the ADR to re-do the sound, they lost the feeling, the atmosphere, of what was going on. So he didn’t do it. And I never did hear him say, as every other director I’ve worked with has said, “That’s good enough, let’s move on.” With Stanley, if it wasn’t perfect, we didn’t move on. Every other director I’ve ever worked for, with the exception of Peter Jackson [Lord of the Rings], I’ve heard them say, “That’s good enough.” Peter Jackson is my hero. If there’s one director I respect as much as Stanley Kubrick, it would be Peter Jackson. I did The Frighteners with Peter Jackson. And he is just as meticulous as Stanley Kubrick. I think he’s the best of the best.

TW• Did you ever get to see The Hurt Locker that won the Academy Award?

Yes, I did. The Hurt Locker was fictitious bullshit. It was entertaining. I have to give it that. But people who have ever been in the military and know anything about EOD, they look at that and they have to chuckle because it’s so ridiculous. Any sergeant that comes on board and is such a loose a cannon like that guy…he would have gotten people killed. The people in his unit would have been insisting that he be replaced. He would find himself sitting at a typewriter—as an O1, a “Remington Raider.” It was just a “Technical Rag,” a total absolute “Technical Rag.” Everything that’s done in The Hurt Locker is done for entertainment purposes only. The people in EOD I’ve talked to hate this show, by the way. I know a bunch of those guys and they hate it. They said the movie makes them all look like a bunch of loose cannons! 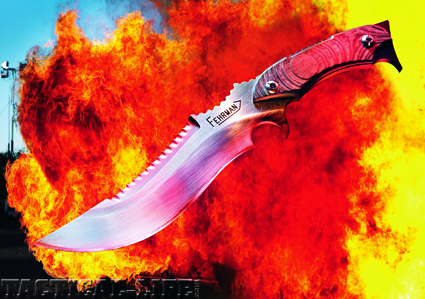 Drill instructors at the Officer Candidate School in Quantico, VA are dedicated to training,…