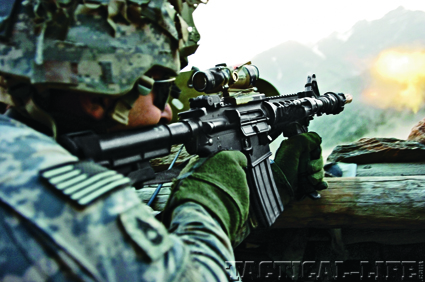 Fighting continues in Afghanistan. A soldier fires an M-4 rifle during a gun battle with insurgent forces in Barge Matal during Operation Mountain Fire.
Comment(s)

TW • Reader D. W. Reiley, from New Orleans, writes: “I was in the Marine Corps back in 1971 when somebody came up with the idea of having all enlisted men in pay grade E-5 and above receive fitness reports just like the commissioned officers, instead of the old proficiency and conduct marks…In the Marine Corps I came up in there was a clear dividing line between the officers and the troops, with NCOs being the glue that held us together. What this new set-up meant was that all of a sudden the NCOs had been converted into ‘miniature officers,’ so to speak—in other words, all the vulnerability without any of the privileges. The result has been the reverse of what they said they wanted…The wheat got out and the chaff stayed in…while we’re going to hell…The Marine Corps just wasn’t The Marine Corps anymore—just bureaucracy in a spiffy uniform….My question, Gunny, is this: How the hell did it happen? Who dreamed it up and why?”

What happened was that we gradually got to the point where everybody wanted to stay in the Marines. Right now we have about an 80-percent-plus re-enlistment rate. Sorry, but we can’t keep 80 percent in. We can’t have it. I mean we need privates, and PFCs and lance corporals. The Marine Corps can’t function without them. And the problem is that if you allow over 80 percent to re-enlist, we end up with no privates, PFCs and lance corporals. Staff NCOs have always had fitness reports. Corporals and sergeants were the only NCOs that had proficiency and conduct marks. I guess that must have changed after I got retired, in ’71.

TW • Does the high re-enlistment rate mean some NCOs have to be let go in a reduction-in-force move?

It seems to me that these days we’re looking for ways to weed out people. Take tattoos. The new rule says that if you have an obscene tattoo on your arm below your shirt sleeve, you cannot re-enlist. I disagree with some of the new tattoo rules, because some of the finest Marines I ever knew had tattoos. However, it seems that with the re-enlistment rate so high, we’ve gotten very particular about who stays in our ranks.

TW • Does the pay have anything to do with the high re-enlistment rate?

The Marine Corps is paying a pretty good wage these days. I’m not saying that most of the Marines who re-enlist are doing it for the money. Some are. But most of them are re-enlisting because they’re patriotic, hard-charging Devil Dogs. When I was a staff sergeant over 10—that’s over 10 years in the Marine Corps—my base pay was $505 a month. A private, in the lowest pay grade you can be, right now is making over $1,000 per month. So a private with 10 days in the Marine Corps is making more than I did as a staff sergeant with over 10 years. Times change. And I’m glad to see we’re paying these young people. Some of them want to get married. In my day, not many privates were married. Even then, you couldn’t rent an apartment and live on $505 a month.

TW • Officials say General David Petraeus, taking over in Afghanistan, will pursue a strategy that “drives a wedge between the Taliban and the Afghan people.” Can he pull it off?

It has yet to be seen. I think he’s a smart man, and he deserves a shot at it. He’s pulled some pretty hot irons out of the fire in the past few years, especially in Iraq. I think he’s probably got it right. You must win hearts and minds. General Petraeus wants to show the Afghan people we’re on their side. I mean, they are the only reason we’re there. We want them to be safe to form a democratic society. A major problem that must be addressed is that we’ve been hearing lately about the Afghan government, some of their top-secret organizations, working with the Taliban. They were warning and alerting the Taliban to our plans. And, of course, we have to submit our plans to the Afghan government and have everything approved before proceeding. And here they are, releasing our top-secret plans to the Taliban! Obviously, this has to be stopped immediately if not sooner or we’ll lose even more troops.

TW • We’re hearing more and more about a strategy for Afghanistan that would have us pull out our troops, then go on trying to control the Taliban by killing them with our drones. Any thoughts?

I read an article in a liberal magazine where they said they thought the people who were handling our drones were having too much fun. That they had turned it into a game. Well, I don’t give a damn how much of a game they turn it into as long as they kill Taliban and Taliban leaders. They have not turned it into a game. They have turned it into a great tool to save lives. Look who has complained the most about drones—the Taliban themselves. Well, I think it’s chickenshit for them to plant IEDs beside roads to kill our troops when they drive past. They kill a lot of civilians who happen to come by, too.

TW • When one of our drones kills 20 Taliban and one civilian, the press focuses the coverage on the civilian.

Well, what was that “civilian” doing there? Were they caught there by happenstance, or were they part of the Taliban ops? I wager that both cases apply—some innocent victims, some civilians aiding the Taliban. It’s no wonder the Taliban want to raise hell about our drones. It’s because we’re killing them. And we’re going to keep on killing them with our drones.

TW • Do you think Obama is going to have the guts to keep pressing the war against the Taliban in Afghanistan?

I think he is. He’s stayed with it this long. That tells me he’s committed to being there—to finishing up what the Bush administration started. I think we’ve suffered with the Rules of Engagement since he’s been on board. In my view, we should never have a President who has not served in the military.

TW • A federal judge says the new Arizona immigration laws have to go.

The situation in Arizona aggravates the hell out of me. We just are not enforcing the laws that are on the books, and that’s all we would have to do to solve this entire problem. The ones passed by our forefathers, who weren’t trying to buy the Mexican vote. This judge is just a puppet of the administration. The new laws are an attempt to help enforce the laws already on the books. This is a state overrun by crime and unsavory people who are just flooding across the border and bankrupting that state, like they already have California, where I live. I’m on the verge of liquidating everything I’ve got and getting the hell out of here and going to Arizona. The administration and its supporters want to bankrupt all the states and get a Socialist government in place. California has already been bankrupted, with taxes and taxes and more taxes to take care of illegals and their children. We’re putting them through school, taking care of their health, putting them on every Socialist agenda possible, all from money taken from the paychecks of hard-working people.

TW • What’s the status of Marine training these days, compared to your era?

I go down to the Marine Corps Recruit Depot. I speak at many graduating classes at the Drill Instructor School, so I know what’s going on there. There haven’t been any changes from my time. The Drill Instructor has basically cleaned his language up a little. They’ve come to realize a lot of our guys come from good Christian families, and if you start spewing garbage and foul language, they just shut you off. They’re not really listening to what you’re saying. So they’ve cleaned that up. There’s no smoking now, drill instructors or troops. Recruit training is just as good today, if not even tougher, than it was in my era. And we still do not train the women with the men.

TW • Then the Drill Sergeants are just as tough as the guy you played in Full Metal Jacket?

Don’t say Drill Sergeant. The Army has Drill Sergeants. The Marine Corps has Drill Instructors. I had to explain that to the folks at Geico for the new TV commercial I’m in. But they called the character a Drill Sergeant anyway because they felt it would play better to the masses. I also did five radio commercials for them.

Toy Story 3 was released in June, and it has just become the highest grossing animated feature film of all time.

TW • Do you read scripts for other movies?

All the time. I have one sitting on the table in front of me right now that’s an absolute piece of shit. I called my agent and said, “No.” I’ve read 10 to 15 scripts already this year and said “No” to all of them. If it looks like it’s not going to be a really good movie…well, I don’t need the money anymore. I’m looking for a good movie that I would take pride being in. If it reads slow and hokey and is not going to be a great movie, why should I do it? I try to figure out every day how I can spend my time with the troops. If I’m doing a movie, that takes me away. So it had better be a good one! 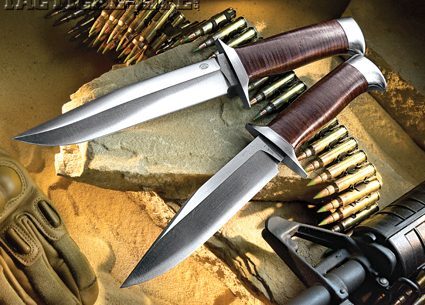 For the battlefield or big game, the Eland and the Oryx knives sport the...