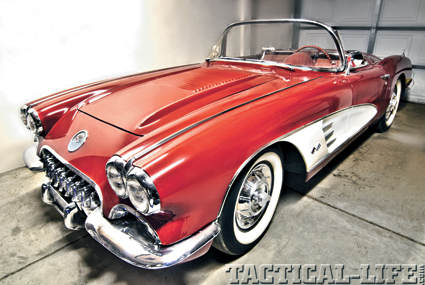 • So you’ve been running and gunning Gunny?
Of late I’ve been resting up after doing nine Marine Corps Birthday Balls celebrating the Corps’135th birthday. That’s as many as I can do without killing myself. I was pretty beat up after that.

TW • Been getting a lot of TV time with the Geico commercials these days. When you call the fellow who’s seeing you for therapy a “Jack Wagon,” that about makes viewers cry with laughter.
The commercial is being played constantly during ball games and stuff. Plus it has over three million views on YouTube. Just imagine that many people who want their friends to see it.

TW • Any new ones like that on the horizon?
We’ve started a program with web commercials for WD-40, with military commemorative cans. A portion of the proceeds will go to various military charities. I like the product and I like their plan. I also did a Wonderful Pistachios commercial that premiered during the World Series. I’m also doing a web-based spot for an Electronic Arts video game called Bulletstorm.

TW • How was your Holiday season?
I spent a bunch of time with the Marines’ Toys for Tots program at Marine and Navy bases in the San Diego area. I also went to several other areas and media sites for the Toys program. This was my 28th year. If I didn’t show up, they’d think I was dead.

TW • The word from Afghanistan is that we’re going to keep the pressure on Taliban strongholds during the winter months. That’s when they usually re-group and re-arm in safety. Not this time, right?
That’s as it should be. The stupidest thing we did in Vietnam was to honor their Tet holiday. They didn’t honor our Christmas holiday worth a shit. Screw Tet! And screw letting the enemy have a break. That’s ridiculous.

TW • A big story out of Fort Benning, Georgia, recently was on a Robotics Rodeo the Army had. Do you like the move to using more robotics?
The Taliban hate the robots, and that tells you something. They want to kill Americans. That’s why they’re constantly screaming about robotic attacks. We need to keep pushing for better robotic weapons as hard and fast as we can. You see, these robots are very brave. They’ll go anyplace, anytime.

TW • What are your thoughts on the WikiLeaks mess?
People in our military, our intelligence especially, are losing their lives because of this clown and his website. I’d like to see him put on trial. I hope our government has the gumption to take action.

TW • Did you see that an Army PFC was one of those putting Secret documents on WikiLeaks?
I did, and I consider it to be high treason. But you watch. He and all the others who did the same thing will never be tried for treason. If anything, it will be some bullshit lesser crime. If you don’t set an example with these guys, don’t be surprised when it happens the next time.

TW • The terrorist threat here at home goes on. What were your thoughts on the Portland, Oregon, kid from Somalia who wanted to blow up a holiday crowd?
We ought to prosecute him to the fullest extent possible. Same with every one of the bastards we’ve caught trying to kill Americans. They have no remorse.

TW • In our last issue, you were talking about your new truck, which you drive just about everywhere. Don’t you ever drive a car?
My around-town car is a ’58 Corvette, painted in Marine colors. It’s very flashy and suits me.

• So you’ve been running and gunning Gunny? Of late I’ve been resting up…