The Media and the War in Iraq: Same Biased Deal as Vietnam!

“If any of you maggots got the brains or nerve to ask me a good question, I’ll answer it right here!” 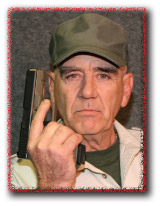 Q: Gunny, since we last talked, the news out of Iraq has mostly been of growing casualties. There doesn’t seem to be a glimmer of sunshine in what we’re hearing. Is it as bad as the media is making it sound?
The media tells us everything bad that’s going on in Iraq, but they don’t bother to mention anything that we’ve accomplished. Everything positive is brushed right under the carpet.

The media seems to be like it was back in the Vietnam era. The dope-smoking Haight-Ashbury hippies were so hopped-up on drugs, they believed every word. The media was Ho Chi Minh’s propaganda tool.

Now the media’s pulling the same crap! The reason we lost the Vietnam War was because they had so corrupted the American psyche—the way Americans thought about how the war was going—that people took to the streets and protested.

I profess that if you were not in Vietnam, you had no idea what was going on, because the reporting was absolutely corrupt and biased. The same thing is happening today with Iraq. I see it every day in the media, and it upsets me.

Q: Our troops are doing a great job. And they deserve better, don’t you think?
The only information the public can get on what is going on in the war is through the media—and the media feeds them half the story. They will tell us an IED explosion killed two of our guys today. They will not mention that our EOD (ordnance disposal teams) found and disarmed 10 other IEDs. This leads the public to believe that we are at the mercy of the enemy and any time they plant an IED they’re going to kill or injure our guys.

Q: The press doesn’t seem to report all the fighting that our people do, do they?
They won’t mention that we’ve built orphanages, that doctors and corpsmen go every weekend and tend to the medical needs of the children. Have you ever seen or heard that from the media? Hell no! And you won’t. Because it’s something good that might, just might, shed a decent light on the administration.

The media seems far to the left. Look at Dan Rather—he was using made-up stories for Christ’s sake. What a scumbag! It’s disgusting that these people on the far left are so corrupt, so intent on protecting the party that they’re willing to cause us to lose another war. It’s not what’s good for America; it’s what’s good for the party.

I grew up in a Democratic household. When I reached the age of reason I figured out the left lacked simple common sense and got the hell away from them. I consider myself an independent but I do lean further to the common-sense right.

Q: There are so many pockets of these insurgents. We’re facing a tough battle, aren’t we?
I’ve been over there. If you haven’t, you really don’t know what’s going on. If you rely on the media, you’re being misled.
Another thing that I want to mention is the simple fact that you keep hearing the media pissing and moaning that we haven’t trained troops. We have trained over 330,000 Iraqis. To give you an idea of how many 330,000 are, my beloved Marines Corps is only approximately 175,000 strong. Do the media honestly believe we can wave a magic wand and out pops a General?  What about a Sergeant Major? It takes the Marine Corps years to nurture warriors into leadership positions. It doesn’t happen overnight. We have trained an Iraqi Army, but we are still training leadership—plain and simple.

We elect these politicians; send them to Washington, to do the people’s business. They do what’s good for the party—and screw America! That’s exactly the attitude they have. What a sorry situation!

Q: When you talk to the troops—I know that you see them over there a lot, and back here too—what do you hear about the fighting?
I believe I mentioned this in the last article: The Marine Corps right now is enjoying a 75% reenlistment rate. These kids join the Marine Corps; usually they spend two tours fighting the war. They come home and their time in the Marine Corps is up. They re-enlist for another four to six years, knowing they’re going back over to fight the war. If we were losing, do you think they would be re-enlisting to go back over, put their lives on the line, and lose the damned war some more? Of course not!
I’ve complained to the media. “Why don’t you talk to some of the GIs? Some of the Marines and soldiers who have been over there fighting? Maybe you’ll get an idea what’s going on.”

And they’ve told me, “We do that.” We’ve all seen that PFC on TV—that one PFC they’ll find—disgruntled—who should have never been in the military in the first place. I don’t know how they find them, because I spend at least 200 days a year with the military. And you know what? I can’t find those guys that complain. The media must go to great lengths to find the individual who suits their purpose.

In Iraq, I would ask, “How many of you people are  conservatives? Or liberals?” Do you realize that a very small portion of our military is from the left? Our military, I would say, is made up of over 80% conservatives. It’s an interesting thought, isn’t it? Are  Conservatives warmongers or patriots? They are extremely patriotic.

Q: People on the far left don’t want to be point man, do they?
That’s exactly right. These far-left liberals that claim their derogatory statements don’t have anything to do with hurting the morale of the troops must be complete idiots to not realize how damaging their statements are to the troops—and how motivating their statements are to the terrorists. They’re aiding and abetting the enemy. We need to slam this point home—a lot of people are thinking it, but are afraid to say it. I don’t hold anything back, and I’m not the least bit worried about my career. Hell, I’m over 60. Most Americans that I see or talk to seem to feel the same way that I do—but they’re hesitant to voice their opinion publicly.

Q: Maybe this kind of thing can inspire others?
Maybe—and I could use the damned help. The media is doing just like Vietnam. They’re trying to convince us we’re losing the war.  I’m not sure why they want to do this. But they have tainted American opinion already. They’re our main source of info. You can’t believe them. People, go to the blogs. Many tell the whole story.

I have no use for anyone who is so stupid they believe that: 1. The  Conservatives orchestrated 9/11. 2. George Bush lied so he could take us to war 3. The Government caused the levees to fail purposely, flooding New Orleans.