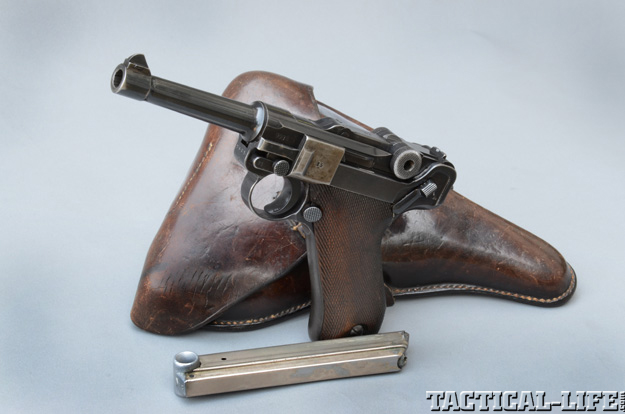 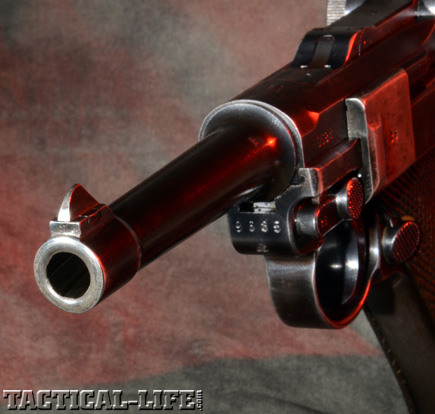 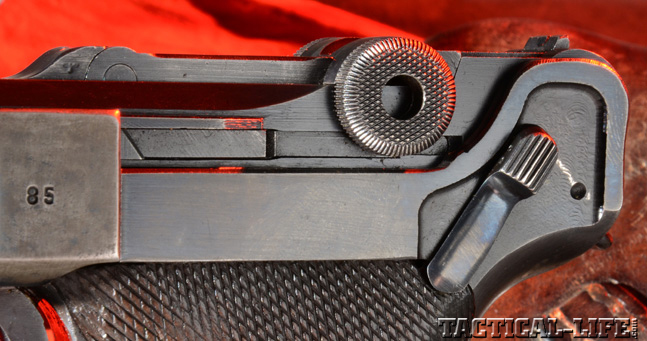 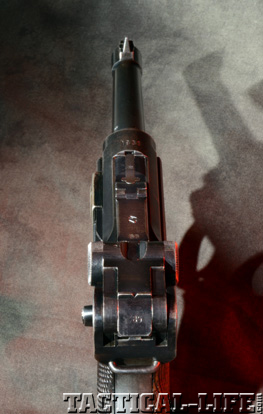 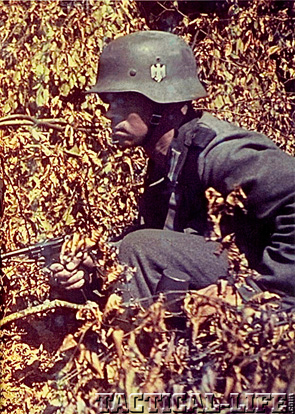 5 of 7
Luger-P08-WWII
A WWII German soldier and member of the Wehrmacht crouches with his Luger P08 pistol at the ready. 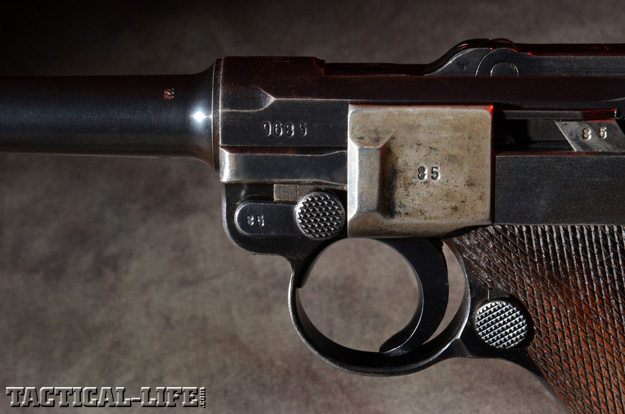 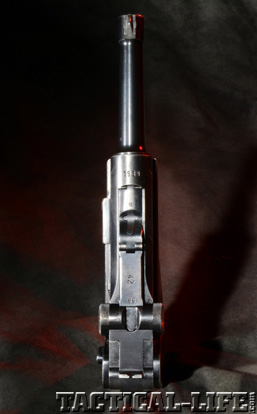 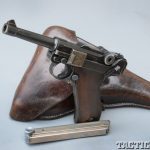 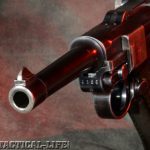 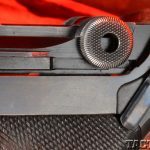 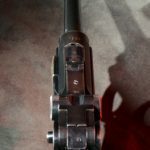 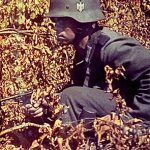 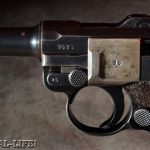 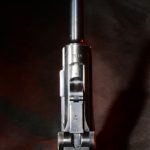 Until the last couple of decades, the Luger was probably the most recognized pistol in the world; for those of my generation, we grew up with myriad TV shows and films in which evil Nazis carried the Luger. For U.S. GIs in World War I and World War II, it was the most prized trophy. In fact, many GIs and Marines serving in the Pacific referred to captured Japanese Nambu pistols as “Japanese Lugers.” After WWII, when Bill Ruger introduced his first .22 pistol, he gave it lines that were similar to the Luger’s.

So many Doughboys returned with Lugers after WWI that the 9mm Luger cartridge became established in the U.S. The 9x19mm cartridge had been developed for the Luger pistol and, hence, was generally known as the 9mm Luger or by the German designation 9mm Parabellum. For more than a century, it has remained the most widely used military pistol cartridge in the world.

The Luger has been described as the most naturally pointing pistol, and one person who believed this was Rex Applegate. I remember when he called me one night at about 11:00 p.m. St. Louis time (it was only 9:00 p.m. for him on the West Coast). He spent quite a bit of time explaining to me why the grip-to-barrel angle of the Luger was almost perfect for natural pointing. I think we talked until midnight, and, though I was ready to got to bed, I got my Luger pistol out of the safe and tried pointing it to test his theory.

Lugers & Americans
When I first started buying handguns in the 1960s, the Luger had the reputation of being unreliable. I think at least some of this criticism resulted from using ammunition that was weaker than German military ammunition. Bad magazines could affect reliability as well. I’ve had some very reliable Lugers. I just needed to keep them lubricated and do a little experimentation to choose the right ammunition. A Luger was one of the first half-dozen pistols I purchased. It was a pistol assembled from mismatched parts, but it allowed me to get familiar with its operating system and with shooting it; and while it wasn’t utterly reliable, I did find some ammunition that it worked pretty well with.

Lugers lend themselves well to collecting, as there is such a large variety. There are WWI and WWII German military pistols by various makers, plus German Navy pistols and German Army artillery pistols with longer barrels. There are commercial variations and contract pistols for different countries. As a result, collecting Luger pistols ranked with collecting Colt single-action pistols for many years. These days, Colt 1911 pistols have become prime collectibles, which also compete with Lugers.

I can’t say I was ever a Luger collector—I doubt if I ever owned more than a half-dozen at one time—though I would estimate I’ve owned 25 or more since my first. I especially like American Eagle Lugers, which were designed for the U.S. market and tested by the U.S. Army. My other favorites are Swiss Lugers and German Navy Lugers, which look very elegant with their 6-inch barrels. Right now I own a WWII German military sample and an American Eagle.

Pistole Parabellum 1908
The adoption of the Luger by the German Army—as the P08, or Pistole Parabellum 1908—played a major part in establishing the automatic pistol for military use. The German Army was so well regarded that their decision to adopt an autoloader influenced numerous other countries to do the same. Actually, the Swiss preceded the Germans, having adopted the Luger in 1900 in 7.65x21mm Parabellum (.30 Luger), but it was the German adoption that gave the Luger and autoloading pistols real credibility.

The Luger uses an operating system based on a toggle lock. As a round is fired, recoil causes the barrel and toggle-lock system to move to the rear. After moving about one-half inch, the toggle strikes a cam in the frame, causing the toggle and breech assembly to unlock. The barrel stops its rearward motion when it strikes the frame, but the “knee joint” hinges as the toggle assembly continues to move, extracting the empty cartridge case and ejecting it. When the toggle joint has completely bent, it travels forward under spring tension, stripping a new round from the magazine, chambering it and locking the action. It should be apparent why cartridges with enough power to fully operate the toggle action and lubrication for the toggle are both important for the P08 Luger pistol’s reliability.

The P08’s ergonomics are fairly good, given its design is over a century old. The grip, which allows natural pointing, has already been mentioned. The magazine-release button is located on the frame above the grip, in the manner used by most contemporary autos. The safety lever is fairly large and located at the rear of the frame. Unlike most modern autoloaders, pushing the safety lever upward puts it on fire, downwards on safe. When the pistol is on safe, the word “gesichert” (German for “safe”) shows. Also, a steel tab is raised to cover the striker when the safety is on. When on safe, the toggle cannot be operated. It is necessary to break the shooting grip to operate the safety lever.

Operation
To allow the Luger toggle to be operated so that the pistol may be loaded, there are two knurled, disk-shaped cocking handles at the rear of the toggle mechanism. By grasping with the thumb and forefinger of the support hand, the toggle may be pulled upward and released to chamber a round. The toggle locks open after the last round is fired. Note, that there is not a manual hold-open, so the only easy way to lock the action open is with an empty magazine. Once a new magazine is inserted, the toggle can be released by grasping it and pulling it slightly to the rear, but the fastest method is to slap it with the palm of the hand.

By current standards the takedown of the P08 is rather complicated. A takedown lever must be rotated, a side plate removed and the toggle released before the barrel and toggle may be slid forward off the frame. The toggle may then be removed by pushing out a retaining pin. When reassembling, it is necessary to replace the barrel/toggle group upside down, taking care that a hook-shaped part re-enters the proper channel. That’s a quick description of the process without going into detail, but it should make the point that, compared to most modern autoloading pistols, the process is complicated and entails removal of small parts that can get lost. Most Luger parts are stamped with the last two digits of the serial number. This helped ensure that, during “gang cleaning” by a military unit, the proper parts went back into each pistol. When buying a collectible Luger pistol, it is very important that all parts match as this can dramatically affect value. However, most of the time magazines will not have matching numbers. When they do, that is a real boon for collectors.

Other points worth noting are that the grips are held on by a single screw at the base, which actually works fairly well but still allows the grips to work loose. On many Luger pistols there will be a notch at the base of the grip for attachment of a stock. Normally, however, the only Luger pistols that were supplied with stocks were the long-barreled Artillery Models. There were also board stocks for the Naval Luger, but I have rarely seen one. Typical Luger military sights are very basic: a front post and rear V-notch. Artillery Models had rear tangent sights graduated to 800 meters, while Naval Lugers had two-position rear sights for 100 and 200 meters.

Capacity
The standard 8-round P08 magazine has a button attached to the follower, which allows the thumb to depress the follower as the magazine is loaded to help speed loading. Luger magazines also have a baseplate, which incorporates two disc-shaped finger grips. Since the magazine drops free when empty, these are not needed to remove the magazine, though the baseplate does allow magazines to be slammed in with the palm more readily. I would speculate the finger-grasping points are actually designed to allow the magazine to be removed from the rather tight spare-mag pocket incorporated into the standard Luger military holster—more about the holster in a minute.

There was also a 32-round snail-drum magazine that was issued with the MP 18 submachine gun and the P08 Artillery Model. These magazines were popular with German stormtroopers who would infiltrate behind the lines in WWI to attack. Original snail-drum magazines with their carrying gear and loader are sought after by collectors and can bring as much or more than many Luger pistols.

I had mentioned the Luger military holster: These are full case holsters that fully contain the pistol and spare magazine as well as a takedown and loading tool. Because of the number of small parts, which is typical of many German pistols, keeping dust and mud out of the P08’s action was important, hence, the full case holster.

Then & NOW
Few pistols have the history of the P08 Luger. Those of us who grew up watching Combat on TV or listening to relatives who served in WWII have images of the Luger ingrained in our minds since childhood. Anyone who has an interest in the mechanics of automatic pistols will find the Luger a fascinating study as well. Would I choose a Luger as my combat pistol today? Probably not. But if I had a chance to buy a nice Luger at a good price, I absolutely would. Presently, I have an urge to get a nice WWI Luger to go with my WWII sample. 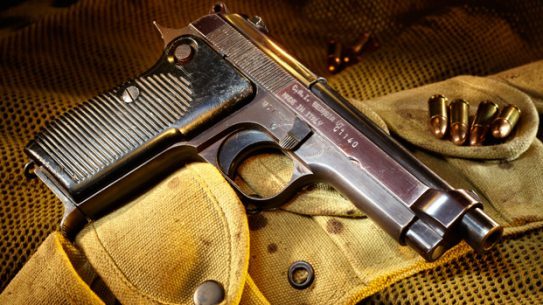