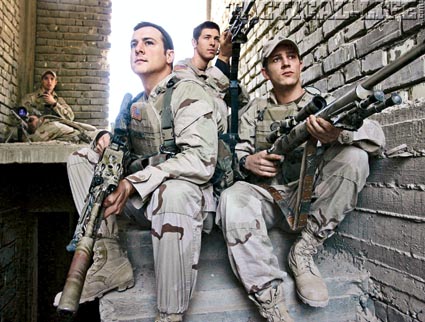 Growing up in Fayetteville, North Carolina, during the ’60s and ’70s, I knew several men who went into harm’s way on a regular basis. As the son of a Church of Christ preacher, it didn’t seem like such a big deal to share a pew with a Green Beret or an Army Ranger—they were just the fathers of my church-going friends. I recall the day that I learned that one of those men, Sergeant Cecil Edens, was a sniper. The days after that, I talked guns with Cecil after church on more Sunday mornings than I can count. Cecil was kind and very patient with a 12-year-old’s questions about guns and shooting.

Then the Vietnam War came to an end, and my father hadn’t held a funeral service for one of my friends’ fathers in quite a while. We thought we’d gotten through the worst. But when my dad broke the news that Cecil was killed overseas and wasn’t coming home, it was a shock. Cecil and several other military men from my youth had made a big impression on me, a kid who liked guns. They probably are the biggest reason why I’m writing for gun magazines today.

While researching the longest confirmed sniper kills, I found the name of U.S. Army Staff Sergeant James Gilliland. Coincidentally, a business associate introduced us a couple of weeks later. Not far into our conversation, we discovered we both loved chasing whitetails. Humble and unassuming, Gilliland’s character impressed me more than his feat.

I got to know Gilliland better over the coming weeks, and we spent some time together vainly chasing bucks in the backwoods of Tennessee. Over a couple of days and with a fair amount of journalistic prodding, Gilliland shared his primary objective while leading the Shadow Team in Iraq. “I taught my men the job,” Gilliland said. “Officially, I didn’t allow my men to individually keep score. There wasn’t anyone carving notches in their rifle stocks.” 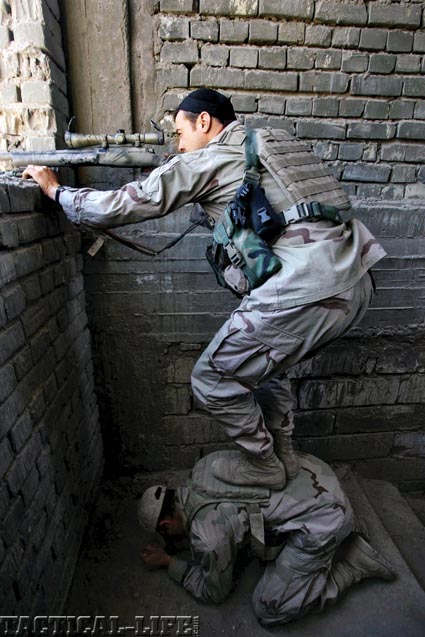 He takes aim with his M24 while getting a little assistance from a fellow Shadow Team member. Teammates had great respect for each other and did what was necessary to get the job done. Image: JULIAN SIMMONDS

Shadow 6, Gilliland’s call sign, preached two things to his team: multiple engagements (more than one sniper firing on a single target) and body shots (center-mass, just under the breast plate). Leading the U.S. Army’s 10-man Shadow Team from 2/69, 3rd Infantry Division, Gilliland’s men learned their lessons well. The Shadow Team was tasked with cleaning out insurgents from Ramadi, Iraq, a target-rich environment. They killed at least 276 enemy combatants in 2005 and 2006. “When we rolled into Ramadi, there were 90 to 100 IEDs a month,” Gilliland recalled. “If we were looking at you and we deemed you a bad guy, we were going to kill you. Our rules of engagement were ‘once he steps across that line, we were going to kill him.’ We were engaging up to three or four targets a day.”

Shadow Team’s success resulted from many factors. They had a good relationship with a trusting battalion commander, and they were allowed to operate with a minimum of second-guessing. An even greater factor was that this group of men generally respected and trusted each other. As soon as Shadow Team arrived in Ramadi, they carefully selected a hide site based on reports of insurgent activity. The team watched a car with four men pull up 60 meters from their hide. Two men quickly got out of the backseat and retrieved two IEDs from the trunk, burying them in a pile of garbage. When the two bombers got back in the car and closed the doors, the team opened fire and killed all four insurgents.

Over the next six months, Shadow Team selected the Outpost (OP) Hotel to base their operations in the center of the city. Abandoned by its owners, the hotel was a grungy building pockmarked by RPGs and bullets. It was selected for the prime observation it afforded up and down a major street that Americans renamed Route Michigan. OP Hotel was used by both Marine and Army sniper teams, and was well known to local insurgents. It was a constant target for small arms and explosives, which invited deadly return fire. When Shadow Team struck, it was common to hear voices emanate from atop the mosques: “Kanas! Kanas! Kanas!” The loudspeakers, normally used to call Muslims to evening prayers, had issued a repeated shout—“Sniper!”—warning enemy insurgents to take cover. 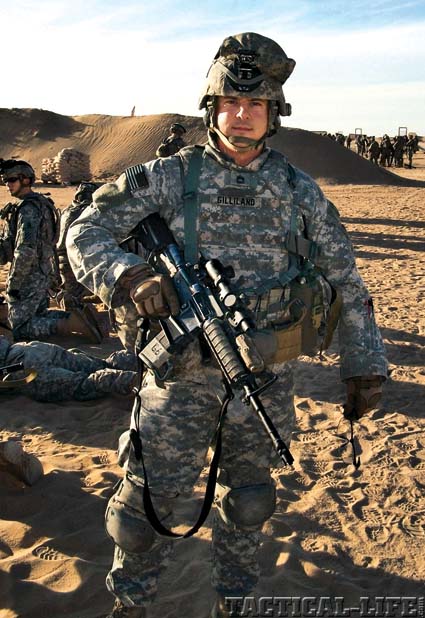 SSG Gilliland with his scoped M4 prepares to move positions for an evening overwatch.

– M24 sniper rifles, chambered in 7.62mm NATO, were intended for personnel targets out to approximately 700 meters.

– Barrett M107.50 BMG rifle was tailor-made for hard targets such as vehicles.

Several members of Shadow Team, including SSG Gilliland, SGT Harry Martinez, SPC Aaron Arnold and others, scored dozens of kills. But the event that got Gilliland and Shadow Team written into history was an insanely long shot from an M24. On September 27, 2005, it set a new record for a confirmed kill with a 7.62mm NATO rifle.

Shadow Team’s parent battalion, 2/69, 3rd Infantry Division, conducted a patrol that Tuesday afternoon approximately 1 kilometer north of OP Hotel. “We were over-watching from the OP,” Gilliland said. “The guys from 2/69 were making targets of themselves. I called on the radio and told Jason to get down. When I saw this for the third time, I called one more time and said, ‘You need to get those guys down.’” Moments later, an Iraqi insurgent sniper took his shot from an upper floor window of Ramadi Hospital and killed SGT Jason Benford, a good friend of Gilliland. 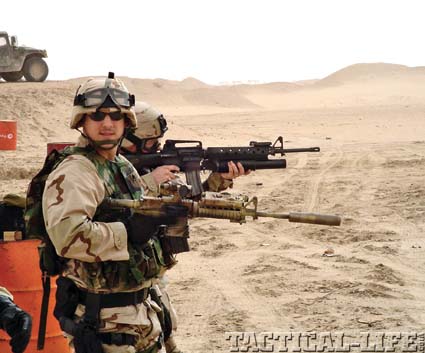 Gilliland at an impromptu firing range to assure he has a reliable zero.

Gilliland had a good view of the hospital from his hide site. When he heard the report that the shot killing Benford came from that building, he started searching for a target. The distance to the hospital from Gilliland’s hide site far exceeded the design limits of his M24 and the Leupold Mark 3 optic mounted to it. Faced with no other option, Gilliland cranked the scope’s elevation knob to its stop. Calculating the scope’s maximum elevation capabilities, he realized that he would need another 12 feet of elevation to come close to hitting anything at 1,250 meters.

“I didn’t have any wind that day to deal with, but I had to allow for spin drift,” Gilliland said. A man carrying a Dragunov sniper rifle emerged from the window of a fourth-floor balcony. “Once I was comfortable, I got a round off,” Gilliland said. “I saw him grimace and fall.” Gilliland’s spotter watched the insurgent sniper take the round and saw him collapse out of sight. “I wasn’t trying to engage the target as much as I was trying to get him out of the window,” Gilliland said. “He got what he got.” A patrol later searched the building and found the man with a bullet through the chest and his weapon on the floor. 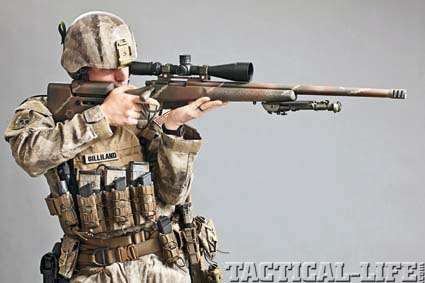 The distance of the shot was 1,367 yards, or 0.7 miles. The ultra-long-range shot set a new record with the 7.62mm NATO cartridge. “He was visible only from the waist up,” Gilliland recalled. “It was a one-in-a-million shot. I could probably shoot a whole box of ammunition and never hit him again.”

To give readers an idea of how steeply the bullet was dropping at that range, underestimating the distance by 10 yards would have put the impact at the target’s feet. Overestimating the distance by the same 10 yards would have put the shot over the insurgent’s head. At the distance Gilliland made the shot, the bullet drops approximately 88 feet from the horizontal line of the bore. Even more amazing, the shot had to be calculated to compensate for about 15 inches of spin drift, an effect that will cause a bullet fired from a right-hand-twist barrel to strike right of the bore line, or to the left for a left-hand-twist barrel. Yet another physical obstacle the bullet experienced was that it had slowed below the speed of sound. Radical things happen to a bullet’s flight when it’s going transonic.

The insurgent sniper Gilliland killed was one of approximately 75 he estimates that he shot dead in less than a five-month period. That many sniper kills puts Gilliland in an exclusive group of men. In comparison, sniper legend Carlos Hathcock recorded 93 confirmed kills in Vietnam. Quick to share credit, Gilliland pointed out that one of his men, SPC Aaron Arnold of Medway, Ohio, chalked up a similar tally. Recalling his feelings of making the record shot, Gilliland said, “I was elated, but only afterwards. At the time, there was no high-fiving. You’ve got troops under fire, taking casualties, and you’re not thinking about anything other than finding a target and putting it down. Every shot was to help fulfill our mission.”

“Every shot had to be judged against the ROE,” Gilliland said. “Our rules of engagement called for positive identification and proportionality.” Gilliland mentioned that his Shadow Team operated at the edge of their ROE, making snap judgments about whether a figure in the crosshairs was an insurgent or not. “Hunters give their animals respect,” he said. “If you have no respect for what you do, you’re not going to be very good, or you’re going to make a mistake. We gave them the benefit of the doubt.”

The media has made a lot of the stereotypical one-shot-one-kill credo, but Gilliland was quick to say that his team wasn’t concerned with keeping score. When Shadow Team chose a target, multiple sets of crosshairs were locked on. A good example was one of Shadow Team’s most successful engagements. When the dust settled, all 10 members of an IED emplacement squad lay dead. “The one-shot-one-kill thing is beautiful, but killing all the bad dudes is even more attractive,” Gilliland said.

Gilliland’s motto, “Move fast, shoot straight, and leave the rest to the counselors in 10 years,” says a lot about a soldier who led his men into harm’s way on a daily basis. Shadow Team’s presence and success made a huge impact on the insurgent horde in Ramadi. Their work drastically reduced the number of IEDs and bombs, and saved countless U.S. soldiers and Iraqi civilians. Mission accomplished. 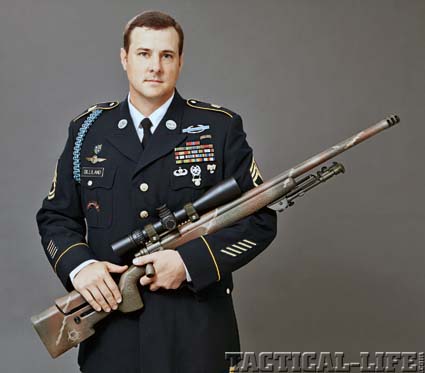 Gilliland—recently promoted to MSG for his exemplary service and leadership—poses for the camera with one of his favorite rifles, an M40 bolt action from Tactical Rifles with a McMillan stock and mil-spec components. Oleg Volk Photos 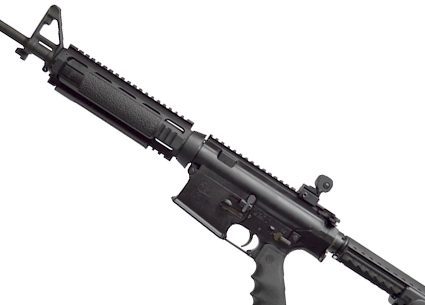