The Italian Air Force has a long tradition of elite ground units within its ranks. In fact, today’s 17th Incursori (which translates to “Raiders Wing”) traces its origins to the World War II ADRA (Arditi Distruttori Regia Aeronautica), which had the mission of attacking enemy airports and sabotaging enemy aircraft. This is similar to the mission for which the British Special Air Service was originally formed in North Africa during WWII. The ADRA also operated in North Africa, against allied airfields, destroying 25 B-17s in their most successful raid. In fact, today’s 17th Stormo Incursori is sometimes referred to as the “ADRA 17th Stormo Incursori.”

Prior to April 2008, the unit was known as RIAM (Reparto Incursori Aeronautica Militare)—the Air Force Raiders Group. Today, the 17th Stormo Incursori is based at Furbari, near Rome, and is assigned to COFS (Comando interforze per le Operazioni delle Forze Speciali), the Italian equivalent of SOCOM. 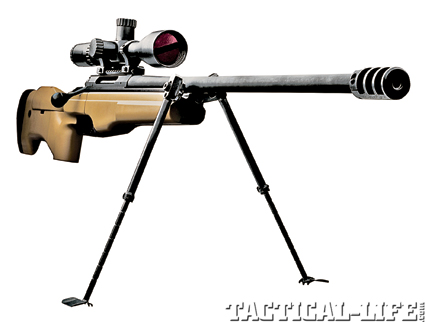 The SAKO TRG-42 in .338 Lapua Magnum is used by 17th Stormo for long-range sniping, such as against enemy aircraft on their airfields.

The 17th Stormo has four primary missions. They carry out combat search and rescue operations (CSAR), like our USAF PJs, and they act as combat controllers—maintaining Forward Air Control and Joint Terminal Attack Control—like our USAF CCTs. The Stormo also act as pathfinders for airborne, airmobile and air-landing operations. Further, they carry out direct action against airbases and other aviation assets; Stormo operators are trained to infiltrate enemy air bases and sabotage aircraft and facilities. A substantial number of operators are also trained as anti-materiel snipers using .338 Lapua or .50 BMG rifles to destroy aircraft and control systems from a distance.