A small patrol from Task Force 1-64 was on a night infiltration through a rural area east of Baghdad and stopped to check out suspicious, curfew-breaking activity. The patrol stopped, dismounted, and set up a checkpoint to stop vehicles out after curfew, which might be smuggling IEDs. After dismounting, they were engaged by heavily armed insurgents. Firing from the rooftops of a nearby rural compound, the insurgents placed accurate fire onto the Humvees sitting atop an elevated roadbed. From a nearby field, the insurgents lit up the patrol with at least one crew-served machine gun. The patrol sought cover behind their up-armored Humvees and immediately returned precision fire. One of the patrol members utilized his M21 sniper rifle with a night vision scope to kill an insurgent 350 meters distant. The patrol pinned the insurgents with accurate suppressive fire, forcing the terrorists to retreat into the buildings. Hearing the screams of women and children in a nearby building, the veteran patrol leader used only precision small arms’ fire, holding his heavy machine guns and grenade launchers in reserve.

The patrol leader realized that the insurgents were firing from the nearby field and a compound of several buildings. The patrol notified its parent unit and sought reinforcements. A larger reinforcing element arrived quickly and linked up with the small patrol. The larger unit also brought Apache attack helicopters on station to provide overhead cover. Keeping up suppressive fire, the larger unit maneuvered into final assault position. They utilized a shotgun breach to make entry to the first building closest to the road. Then the men conducted a hasty night attack on the insurgents and their compound, clearing four buildings room by room and floor by floor. During the close-quarter battle the U.S. troops encountered women, children, insurgents, and a rabid dog tied up to the front of one of the buildings. Careful fire discipline and controlled use of weapon-mounted tactical lights allowed the
American Soldiers to separate civilians from insurgents.

After the attacking, U.S. troops consolidated and searched the four buildings in the rural compound, they found that they had taken four military-aged male detainees who tested positive for gunshot residue, five automatic weapons including AK47s and one SKS (with the still-warm bolt locked to the rear), and a large amount of insurgent equipment and propaganda. The U.S. Soldiers accomplished their mission without suffering a single friendly casualty. Some of the buildings contained families with small children but not a single civilian was harmed during the engagement. The detainees were transported to a nearby U.S. base for questioning. — Michael Dick

Wanted: UNDER FIRE Stories!
TW would like to hear from you! Email your submission and photo to Tactical-Life.com. We pay $100 for any featured story! 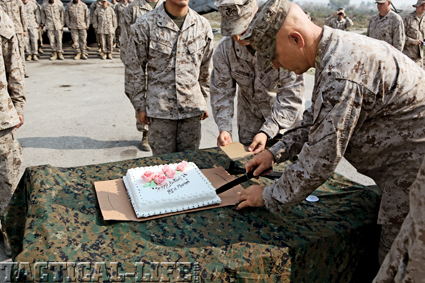