by Mike Detty
in Guns, Handguns
0

Back in April of 1981, while my classmates at the University of Arizona were spending their spring break on the beaches of Puerto Penasco, Mexico, I made a drive north to Chino Valley, Arizona, to attend the basic 250 class at Gunsite. Back then, it was called the American Pistol Institute by its founder Jeff Cooper. He helped popularize the 1911 as a defense tool, and the retired Marine Lt. Colonel was one of the first to analyze, dissect and develop training protocol to aid individuals in surviving an armed confrontation.

In the years that followed, Cooper would build his shooting school into the largest and most successful privately owned facility dedicated to training responsible citizens. Starting with just 162 acres, Gunsite has grown to more than 3,200 acres today. That 250 class laid the groundwork for me as a shooter and student of armed conflict. The things I learned that early spring week helped me as a Marine, avid competitor and concealed carrier. 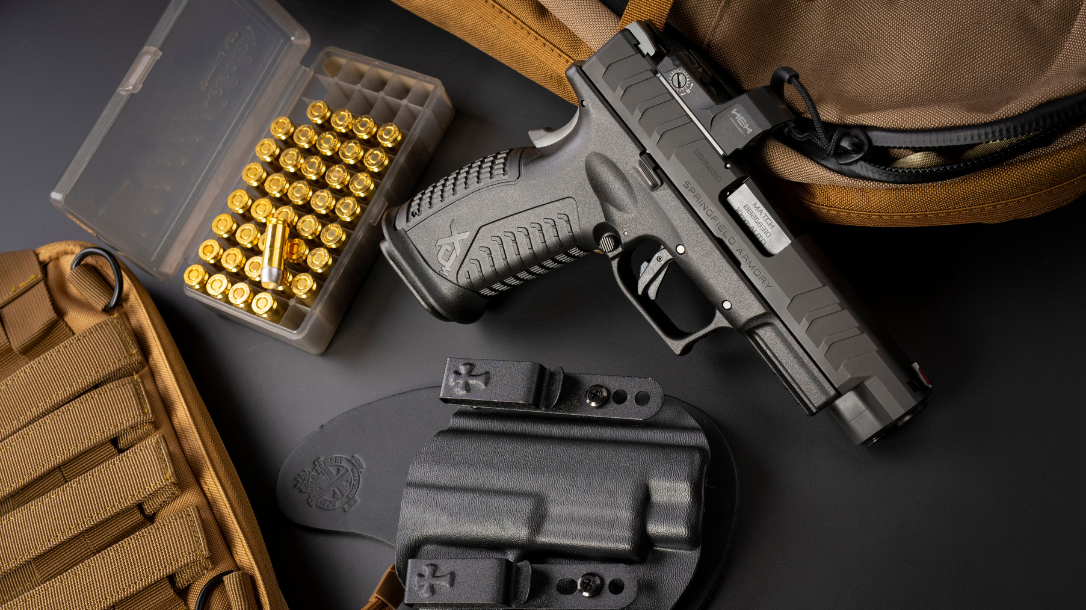 Looking back at my faded 40-year-old notes, I had scribbled a Cooper quote from our first classroom lecture. “A fighting handgun should have everything you need and nothing you don’t. Fundamentally a worthy gun should have good sights, a good trigger and an extended thumb safety. That’s all you need.” To drive home his point, Cooper unzipped a pistol rug and with two fingers remove a pistol, much in the same manner you would handle a rotting rodent carcass.

It was an MS Safari compact pistol that the company, then based in Arizona, had sent to Cooper unsolicited. It had a hook on the front of the trigger guard and a finger groove on the frame’s front strap as well as an oversized magazine release. Adding insult to injury, it also possessed a full-length guide rod, adjustable rear sight and an extended slide release, which seemed to particularly irk Cooper. “This is not a fighting handgun,” said Cooper. “It’s a collection of parts trying to answer a question no one asked.”

I thought about Cooper’s “everything you need and nothing you don’t” remark last week when I received a sample of Springfield Armory’s brand-new Garrison. It’s a rock solid 1911 designed to give the shooter a good solid handgun, without clutter and unnecessary features. Right out of the box, it has good sights, a good trigger and a strong-side only extended thumb safety. Springfield will offer the Garrison in a blued (honest-to-God hot salt bluing) version as well as a stainless-steel model, which I received for evaluation. For concealed carry or home-defense, this gun is ready to go—all at a very affordable price.

Fit and Finish on the Springfield Garrison

When I see domestically built 1911 pistols that sell for what most imports do, it makes me wonder what corners were cut to be able to offer a gun at that price. If Springfield Armory cut any corners, I have yet to find them. It’s a handsome gun with the slide and frame flats polished bright and the curved surfaces, like the top of the slide and frontstrap, bead blasted to a satin finish. The Garrison’s major components: slide, frame and barrel are all machined from forgings. Some manufacturers use cast frames to reduce machining costs.

A forged frame and slide offer tighter, more dense grain structure and guarantee the strength to provide a lifetime of service. Slide-to-frame-fit of the Garrison is impeccable. Even with the barrel removed and the slide on the frame at the “in battery” position, I am unable to get a hint of wobble between frame and slide.

Fitment of the parts is also exemplary. The single strong-side-only thumb safety snicks on and off crisply and never leaves the user wondering if the gun is on or off safe. The slide release fully engages the slide’s cutout, and the magazine release is smooth and positive. Holding the gun up to a light there is no visible slop in the sights’ dovetails, and the trigger tracks smoothly in its raceway without any vertical or horizontal slop. These and other modern upgrades make the Springfield Garrison pleasant to shoot despite the 45 ACP chambering.

The Garrison has a Great Trigger

My test sample’s trigger broke precisely at 4.5 pounds, crisp without a hint of overtravel. Springfield outfits the Garrison with a skeletonized hammer and a long aluminum trigger but does not use a firing pin safety. The Garrison uses a Series 70 style frame, and that’s a huge selling point to me. A high sweep beavertail is also used on the Garrison, and it has a memory bump to help the shooter fully engage the grip safety where the thumb rides on top of the thumb safety instead of under it. The beavertail will protect the web of the shooter’s hand from hammer bite and generally makes shooting more comfortable, especially if the round count is high. If you take a shooting class where you’ll be firing a thousand rounds in a week, like at Gunsite, you’re going to need this feature.

Springfield Armory lowered and flared the Garrison’s ejection port to give empty cases ever opportunity to exit the gun unimpeded. Old Colt-style cocking serrations at the rear of the slide give the gun an “Old School” look. “Garrison” in small letters is laser engraved on the left side of the slide while the right side is marked “Springfield Armory” with their crossed cannon logo. Novak style, low-profile sights are dovetailed into the slide and possess the common three-dot pattern. If the user decides at some point they need tritium night sights, it’s an easy matter to replace them.

The Springfield Garrison 1911’s barrel is match grade features stainless steel construction with a 1 in 16 twist. It is throated from “ear to ear” and well-polished as is the frame’s feed ramp to feed all rounds flawlessly. Springfield Armory uses a standard stainless steel bushing, and I was able to easily hand turn the bushing in the slide without the need for a bushing wrench. The gun is also equipped with a standard recoil spring guide rather than a full-length recoil spring guide rod. This omission, in my estimation, sacrifices nothing. I once asked a group of dedicated 1911 experts if they ever witnessed a 1911 failure that could have been prevented with the use of a full-length guide rod. After a few moments of contemplation each of them shook their heads no.

I headed into the Arizona desert for to see how the 1911 would perform. Remington’s 230-grain Golden Saber hollow points produced the best group, measuring just .83 inches. Speer’s +P 200-grain Gold Dot G2 was nearly as accurate but also churned up 497 fpe. The only load to generate more energy was the Hornady Critical Duty +P 220 grain FlexLock load. I have to admit, though, both of these loads were a handful to shoot. My aggregate group size for the six different loads was under 1.25 inches and that impressed me.

I also had a chance to fire the Garrison at my MGM BC C-Zone steel target and found it to handle extremely well. Controlled pairs and double-taps found their mark when I did my part. The sights were easy to track, and the Garrison’s crisp trigger made shooting the full-size 1911 quickly, easy.

The Garrison has a lot going for it. From its forged construction to its combat sights, to its refined trigger and extended thumb safety, The Garrison is built from the ground up to serve novice or expert. It has everything a fighting handgun needs and nothing it doesn’t. I mentioned earlier that the Garrison’s most attractive feature is its price. Just $800 for the blued version and $849 for the stainless-steel model I tested. The Springfield Garrison fits the bill for home defense or concealed carry. It also makes a great base pistol for a custom build. At the price, it’s hard to argue with.

Bullet weight measured in grains, velocity in feet per second (fps) by chronograph, energy in ft. pounds and accuracy in inches for best five-shot groups at 25 yards.