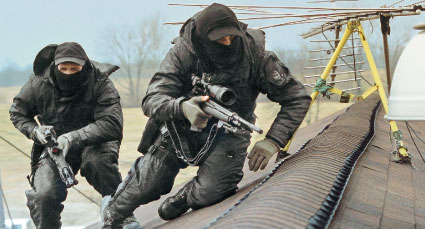 Efficient use of the tactical precision rifle is by far the most complex and demanding of shooting. And, to the dismay of many, results are too often disappointing with accuracy, handling qualities, ranging ability and terminal ballistics far below expectations. Why does this happen?

The vast majority of such rifles are bought or custom-made by shooters who have seriously considered the issue and thought they were buying “the right stuff,” so why doesn’t the fruit of their labors live up to their hopes?

More often than not, it’s because they didn’t create the best combination of rifle, scope, mounts, ancillary equipment, ammunition and operator ability, even though when examined individually, each component in their “system” is top quality. In other words, they failed to get components that would give them the best balance for their needs to produce maximum efficiency.

Bolt vs. Manual Action
The first choice is to choose what type of action – bolt-action or self-loader – is the best for your needs. Many shooters still believe that only a bolt-action can produce the extreme accuracy needed for ultra-precision or long-range performance, but this is untrue. Properly prepared, a good self-loader is every bit as accurate as any bolt-action.

If multiple targets or the need for fast second-shot follow-ups are involved, the self-loader is clearly superior. Also, there is no need to reach up and cycle the bolt for each shot – clear tactical liability in some environments (i.e. urban and suburban settings). If none of these three issues are part of your expected tactical mission, then a bolt-action is a simpler weapon and is thus a better option.

What barrel length is best should be determined by finding the best balance between handiness and ballistic performance. A shorter barrel without a doubt makes the rifle handier, but it also reduces muzzle velocities substantially. Don’t go with a barrel that’s too short or you may lower the rifle’s performance to unacceptable levels. On the other hand, barrel lengths of more than 26 inches do not produce higher velocities and can make the rifle unwieldy under field conditions.

Fluted barrels have become popular because they cool the barrel more quickly and evenly, but realistically you may not need one unless the rifle is in danger of overheating – a rare occurrence in tactical situations. In fact, the only time I can see that actually happening is during the zeroing and calibration process, when you shoot a great deal and record the results at various ranges for future reference. So, while a fluted barrel looks neat, in most cases, from a cooling standpoint, but it really isn’t necessary.

What About Scopes?
The selection of scopes is often a problem as well. Many shooters think that a scope with a huge magnification is the way to go, but then they are disappointed when they discover that the scope doesn’t gather light well, picks up a lot of mirage, is difficult to focus, and provides too small a field of view.

Magnification is important, of course, but the tactical mission needs to be considered. Too much magnification poses more problems than it solves, while too little makes target identification and precise shot-placement on small targets excessively difficult. So, for the majority of tactical situations, 9x or 10x is the best choice, with a maximum of 14x for specialized use on small targets.

In addition, the distance between the scope’s ocular lens to the shooter’s eye (eye relief) is also crucial. If it’s too close to the eye, the shooter cannot see a full field of view, whereas if it is too far away, the shooter must scoot his head forward to see correctly, which is physically stressful and therefore fatiguing on the neck and trapezius muscles.

Focusing the scope is also an often-overlooked matter, but it’s extremely important nonetheless. If the reticle isn’t sharp and clear and objects showing in the scope’s field of view are blurred, both consistency and precision are impossible. The best way to deal with this issue is to point the rifle at something about 400 meters or so away, then focus the ocular lens. Turn it in or out until both the reticle and object(s) downrange are clear. Then, you’re ready to go.

For best overall efficiency, scopes should have one-quarter MOA adjustments and clearly marked, easy to use turrets. One-eighths MOA is too finite, time-consuming and difficult to use under field conditions, while one-third or one-half is too coarse, preventing precise zeroing in and/or downrange calibrations as needed.

Though exposed turrets are all the rage these days, I prefer scopes with turrets protected by screw-on caps. Since I spend a great deal of time in the field with precision rifles, I’ve found that inadvertent movement of exposed turrets is commonplace and the potential for accidental damage is very real.

Scope bases also make a difference. It should be the one-piece type and be constructed of steel. If you need more flexibility, then a Picatinny rail-type base is the best option. In addition, if your mission requires calibrating the rifle to longer ranges than normal, the scope will often run out of elevation capability too quickly. To prevent this, bases with extra elevation built into them become necessary and they are available in both standard and Picatinny rail configurations.

What Cartridge?
And how about cartridge selection? Which one is best for you? In this area, many feel that the venerable .308 is the best all-around choice, but is it, really? If your needs are primarily at ranges less than 500 meters and don’t require too much penetration, I would answer affirmatively. But if you need more range, punch and penetration, the .308 Win isn’t the best choice. For missions requiring that kind of performance, a more potent cartridge, perhaps one of the magnums is needed.

The .308’s primary appeal is that it is very accurate and it provides enough punch and penetration without heavy recoil. Thus, it is easy to shoot well and the average shooter can use it with little or no discomfort. Its popularity is well deserved, but it has no magical capabilities, so don’t select it for the wrong reasons and be disappointed later on.

Regardless of the cartridge you select, test it exhaustively with your rifle to determine which load it will perform best with and that includes more than just accuracy alone. Most cartridges can be had in many commercial loadings, with many different kinds of bullets, so consider your needs before selection.

Some loads are intended for competition purposes, so they use highly accurate bullets, but they produce poor terminal ballistic effects (expansion and penetration) in tactical situations. If all you intend to do is make headshots, then any bullet will do, but if your mission is more multi-faceted, some kind of expanding bullet might be a better idea.

For typical situations, I would recommend avoiding the .50 caliber, since its tactical use is highly limited due to its tendency toward extreme over-penetration. Moreover, weapons chambered for it tend to be very large and very heavy! Is it fun to shoot? Heck, yes! But is it a good choice for general-purpose precision missions? No…not really.

If you opt for a 20- or 22-inch barrel and/or prefer a high-performance cartridge, a flash suppressor might be in order. Bright muzzle flash is not only a tactical liability because it discloses your location, but it also tends to blind the shooter as well.

Final Notes
Everything must be kept in the proper balance. Too much or too little in any of the myriad categories of consideration reduces efficiency commensurately. So, think about your needs long and hard before making any decisions. Then select those items that represent the best possible balance for them. If you do, you’ll save lots of time, energy and money, and find that tactical precision shooting is made tough by poor choices more than anything else. 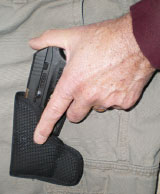