0
SHARES
77
VIEWS
Share on FacebookShare on Twitter
With input from Col. Jeff Cooper, Steyr’s Scout rifle is ready for any task. Light and reliable, it includes several key components. The Integral bipod made for excellent prone shooting, and its light weight and comfortable stock were perfect for shooting off-hand style.

Although never afforded the honor of meeting Colonel Jeff Cooper, I know his philosophy well. My early career was comprised of training with Clint Smith and Bob Schneider, both longtime associates of Col. Cooper. My current profession has allowed me the opportunity of training several times in the last couple of years at Gunsite, rounding out my familiarity with his doctrine and teaching.

Thanks to spending a lot of time with Ed Stock, Mike Hughes and a number of other Gunsite instructors, it is clear that our philosophies are similar in many ways. As a retired lieutenant with many years on a SWAT team, practicality in the field has always been my primary goal. That was true as it pertained to tactics, training, and most importantly, weapons. Techniques and the manner of application can change and should, but the philosophy remains the same. What you use, how you use it, and how it is applied in the field should be practical. What changes you make through practice and application should always be measured against how they work in real life. This was at the heart of Colonel Cooper’s philosophy, and remains so to this day at the Gunsite Academy. 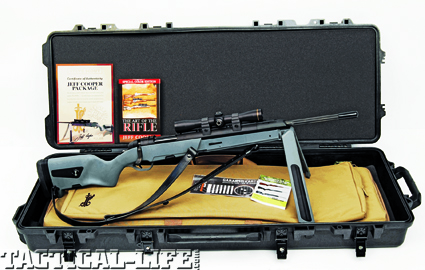 The commemorative package includes a hard case, a soft case, Leupold 2.5X long eye-relief optic, Ching Sling, a copy of The Art of the Rifle, and two magazines

Colonel Cooper was not only a seasoned combat veteran but an avid hunter. Over the years, he developed training and tools that best suited hunting in general and large game in particular. One of the more popular and certainly practical is his idea of a “scout rifle.” The concept was refined and promoted in earnest by Cooper in the 1980s and remains popular among big game hunters to this day. Although perfectly suited to hunting, the real goal was an all-purpose rifle—one rifle that will work for fighting, hunting, and anything else in between. Given that it will be used against several different threats and targets, there were a few requirements.

The idea was to have a rifle that was less than a meter or so in length chambered in a powerful rifle cartridge. Although other cartridges were made over the years, the standard was either a .308 or 7mm-08.

The rifle needed to be capable of optical sighting yet maintain iron sights. In fact, optical sighting was not mandatory for the Colonel—iron sights were the primary sighting system. He also preferred long eye relief sights for a number of reasons. One reason was that many earlier weapons required feeding from the top, so scopes would have to be mounted forward of the action. Long eye relief sights are also faster to pick up and can be fired with both eyes open. Typically of 4X magnification or less, often 2.5X, they were perfect for fast action in the field.

The Colonel wanted his scout rifle to be light as well, specifying an unloaded weight of no more than 7.7 pounds, and lighter if possible. A sling was a requirement, but it needed to be practical and applicable in the field. A favorite for this rifle is the “Ching Sling.” Designed by Eric Ching, this sling is a three-point sling, allowing for very fast access and rock-solid lockup when firing in field conditions.

As a practical field rifle, Cooper re­­quired combat accuracy with a standard of 2 MOA (4 inches) at 200 yards. Greater accuracy was fine, but reliability was the key. The most accurate rifle in the world will get you killed if it is not reliable. This meant shorter, thinner barrels—shooting groups was not the point.

Other features were added as this concept progressed, too, including magazine-fed weapons with a spare mag in the buttstock, polymer or lightweight stocks, and an integral bipod. The overall concept of a scout rifle was really pretty simple. It was a powerful rifle designed to have everything you need on the weapon that could shoot accurately under stress, in real conditions, and with complete reliability.

Although several companies make rifles to these specifications, the Steyr Scout is the measure. It’s available in a basic configuration, but the company recently introduced the Jeff Cooper Commemorative Scout Package—a precise replication of the Colonel’s specified and desired features that are perfectly suited to the original design.

The rifle provided for testing is a Steyr Mannlicher Scout chambered in .308 caliber. With a 20-inch fluted barrel, it is perfectly suited to the caliber, and it’s also lightweight and compact. The barrel is mated to a synthetic stock with black and grey accents. The Scout utilizes 5-round polymer magazines and a spare is included in the stock. It sits under the stock, perfectly situated for fast reloads under stress. The stock also includes an integral bipod system that folds into the forend, providing for stability no matter what shot is necessary. A short Anschutz rail is located under the stock for other accessories you may desire. The rifle is set up to accept a forward-mounted scope as well as a standard scope. Steyr’s Scout also includes integral iron sights. The front sight folds into the stock, and the rear folds into the action. Weighing in at a mere 6.6 pounds, it is a lightweight rifle that packs a real punch. 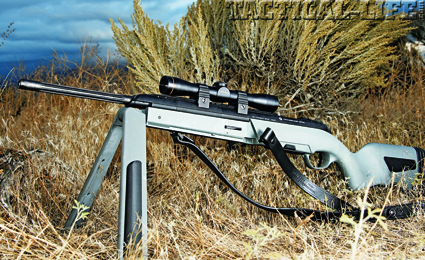 Steyr’s commemorative package comes with a few extras: a Ching Sling, a Leupold 2.5X riflescope, and the special Jeff Cooper logo is prominent on both stock and sling. Although not provided for testing, the retail package includes a soft case enclosed in a hard case, a factory shot card, and a special hardback edition of The Art of the Rifle by Jeff Cooper. Lastly, an authentication card is included with the rifle’s serial number for certification.

It was time to break the rifle in and test its accuracy. The first thing I noticed about the Scout when I took it out of the box was that the scope was already zeroed, saving a ton of time. A short break-in was accomplished, and it was time to shoot some groups. I fired groups at 100 yards from a prone position using the integral bipod. In an effort to keep the application real, I did not use a rear bag or a mat.

A friend of mine told me these rifles were accurate and he was correct. My best group measured 0.57 inches with the Barnes VOR-TX 168-grain TTSX load. Nothing I tested went outside the 1-inch mark. The rifle has a two-stage trigger that is incredibly crisp and predictable, making accuracy pretty easy. As light as it is, the recoil was noticeable, especially compared to my 14-pound sniper rifle, but it was completely manageable. Although no paper was engaged at longer ranges, I did hit some steel targets at 350 yards with ease. The Scout was a flat-out laser—it was very easy to run.

Next it was time to test the gun on some field runs. A sort of walking course was set up, with steel targets ranging from 100 to 350 yards. Walking up the road, I would drop to a knee and engage the target. The scope was fast and dead on, with seldom a miss even at the longest ranges. Firing from standing or kneeling was very easy, and so long as I held it tight in the pocket, it was very controllable, too. Anyone lucky enough to train at Gunsite goes through a similar course and this is indicative of the rifle’s concept. It is really designed to hunt with, no matter what threat you are hunting. It comes to bear very quickly, is very accurate and imminently practical. The spare magazine is a nice touch, and with some practice, I found it incredibly handy. These magazines proved reliable, and because they are top-feeding, loading was a breeze. 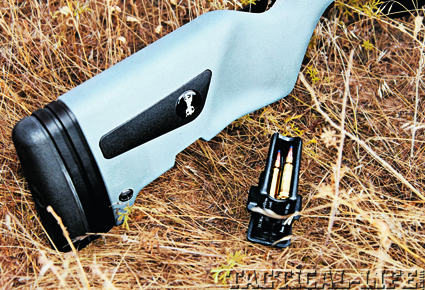 A Spare five-round magazine hides in the stock, just behind the grip. Also note the Jeff Cooper logo on the side.

I spent the rest of the day just having fun with the rifle. Although I’ve spent lots of time with a military leather sling, this was my first time using a Ching Sling. I found it very fast and compact. The sling is made by Galco and includes a nice instruction book outlining both the American (barrel-up) and African (barrel-down) carry modes. Both were very comfortable and the sling brings the rifle to bear easily. The Ching Sling also keeps the Scout out of the way, though I found the rifle incredibly light and easy to carry when it was un-slung as well. Given its purpose, the rifle and its accessories are very well designed.

Lastly, some prone work was in order using the integral bipod. You release the bipod by pushing a large button on the bottom of the forend and pull down on the stock. It took some practice, but it was pretty fast with some work. The bipod positions your rifle pretty high, but that is perfect for the field. As much as my bench- rest bipod facilitates my sniper rifle in an urban environment, it would not get me over weeds. Fully extended, you can see over most of the fauna easily. 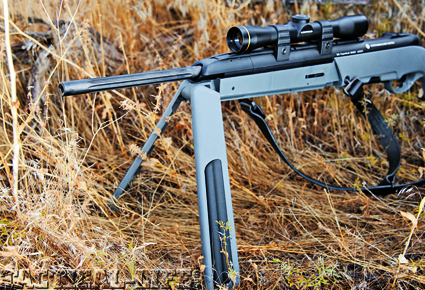 There is little doubt that Steyr Arms’ Jeff Cooper Commemorative is an accurate replication of everything Jeff Cooper wanted in a scout rifle. So, for a collector or purist, this is probably the ticket. The rifle is available in other configurations as well, too, including 7mm-08 and .243 Remington versions. The .243 version would be an excellent training tool for younger or smaller shooters. You can certainly change scopes and even mount a regular scope if desired. There are larger-capacity magazines and other accessories as well. But for me, it was just a ton of fun to take this Jeff Cooper-inspired weapon out for a fantastic range day. If you get the chance to put this Scout through its paces, jump on it—you won’t be disappointed. For more information, visit steyrarms.com or call 205-655-8299.