It’s early in the morning when a human smuggler’s front door is breached by U.S. Immigration & Customs Enforcement HSI (Homeland Security Investigations) SRT (Special Response Team) Special Agents. Within 30 seconds the location is secured and the subject of a major criminal investigation is in federal custody. This isn’t a TV episode about federal agents, this is an example of the tactical operations that U.S. ICE SRT agents perform on a regular basis in 12 different parts of the United States. ICE also maintains five additional certified SRT units that are managed by ICE Detention and Operations.

Back in the “good old days” it was standard operating procedure for a federal agent or a detective to work a case from beginning to end, which included hunting down the guilty party and making one or more arrests, under any and all circumstances—without any assistance from a tactical team, as very few existed. Those of us who worked in law enforcement during most of the 20th Century often had to breach a door by kicking it in or using some type of subterfuge so we could gain access to a location and make as many arrests as were required to solve a case.

During the latter part of the last century, LE officers from various agencies were routinely kicking doors or taking subjects down in car stops and buy-bust situations. During this intense period of smuggling activity, the U.S. Customs Service evolved into a very progressive and highly successful interdiction and investigative agency. Due to the number of high-risk enforcement actions being executed on a regular basis, the U.S. Customs Service decided to establish a tactical unit called the WETT (Warrant Entry Tactical Team). In time, the U.S. Customs Service changed the name of its tactical team to the Special Response Team. 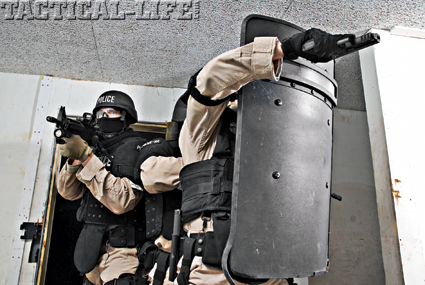 U.S. ICE SRT Agents from Homeland Security Investigations train to move fast while being incredibly methodical in their approach to tactical operations.