Suspects can’t hide their body heat. Not easily, anyway. Forward-looking infrared (FLIR) imagers and cameras detect this heat, called “infrared light” or “thermal radiation,” and from it create a picture in a scope or video screen. Infrared wavelengths are normally invisible to the human eye, but FLIR imagers detect and interpret the heat emissions, or thermal radiation, of objects to provide users with an image.

Better Than Night Vision
Because almost everything emits heat, the black-and-white image displayed shows everything in view, with contrast between temperatures providing the detail needed for a clear picture. Humans, at a normal body temperature of 98.6 degrees Fahrenheit, show as white or black on the display, depending on an imager’s settings—in contrast to varying shades of gray for vehicles, foliage, and structures. Normally, white is hot, black is cold, and shades of gray complete the image by displaying the temperatures in between. 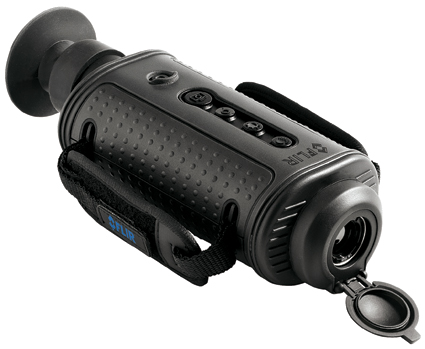 The H-Series Thermal Imager by FLIR Systems is opening up new markets to the technology, namely smaller police and sheriff’s departments that were unable to afford past models.

The infrared wavelength that FLIR detects is different than what is used for night vision, or night observation devices (NODS), which can only operate where there is at least some light available and nothing is obscuring visibility. FLIR requires no light to function and, because it measures only thermal radiation, can be used in complete darkness with no natural or artificial light to better the image. FLIR is also uninhibited by haze or smoke—a feature not shared by traditional night vision. Although effective in the dark, NODS have significant visibility issues with blurring caused by the halo effect of background lighting, especially in urban environments, and often require the use of external illumination, such as a spotlight fitted with an IR filter, to better image quality in very dark areas. FLIR does not share these inhibitions, and while it was designed for use at night or in conditions of restricted visibility, it can also be used in daylight with the same performance.