by Charlie Cutshaw
in Uncategorized
0

5
SHARES
5
VIEWS
Share on FacebookShare on Twitter
The Thor XM408, chambered in the extremely powerful .408 Chey Tac cartridge, offers shooters a long-range precision rifle with 2,000-yard capability in a package that weighs less than comparable .50 BMG rifles. It also breaks down easily for transportation.

The .408 Cheyenne Tactical (.408 Chey Tac) cartridge is a military and LE long-range precision tactical cartridge whose time may well have come. The original round was developed by Dr. John Taylor and William Wordman in the United States in 2001 to provide a precision tactical cartridge with precision accuracy out to 2,000 yards. The .408 Chey Tac essentially uses a modified and necked down .505 Gibbs case and launches either a 305-grain bullet at 3,500 FPS (feet per second) or a 419-grain bullet at 3,000 FPS with a muzzle energy of more than 8,000 ft-lbs (foot pounds). By comparison, a 168 grain .308 match cartridge has a muzzle velocity of only approximately 2,600 fps and 2,180 ft-lbs energy. The .308 is totally overshadowed by the .408 Chey Tac, although our Thor XM408 test rifle was only marginally heavier than precision tactical rifles chambered for the .308. 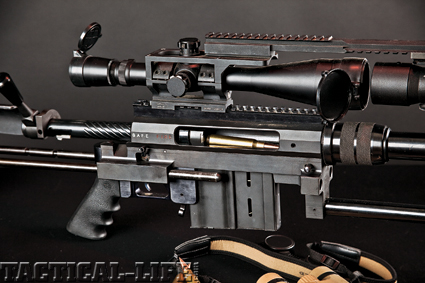 The Thor XM408 employs a robust action made from steel and feeds from a detachable box magazine. Note the spiral grooves on the body of the rifle’s bolt.

The .408 Chey Tac is intended not only for antipersonnel purposes, but for antisniper and antimateriel use, as well. Naturally, a large cartridge like the .408 Chey Tac will deliver more felt recoil than lesser cartridges, but this can be offset by the use of muzzle brakes. The Thor XM408 brake reduces felt recoil to approximately that of a .308, although muzzle blast alongside the rifle is pronounced and distracting. The spotter on a precision tactical team using an XM408 should position himself slightly to the rear of the shooter’s shoulder to avoid having gases blown into his face. 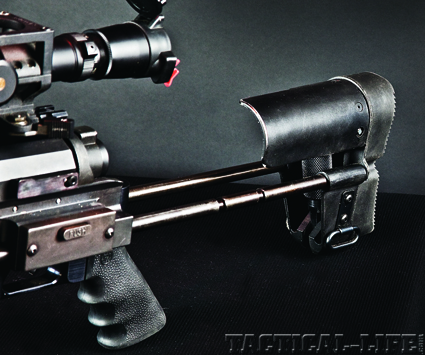 The XM408’s stock is fully adjustable for both length of pull and cheekrest height, making it infinitely adaptable to a wide range of tactical operators.

For military and law enforcement use, where does the .408 fit? For the military, the .408 gives the precision tactical marksman a range advantage over any .308 or .338 caliber rifle, while adding little more to the weight burden that every Infantryman must contend with. Our test XM408 for example, tips the scales at 26 pounds. When compared to .50 BMG caliber rifles, our XM408 weighs less than the lightest weight .50 BMG rifle we have ever tested. The XM408 that is the subject of this evaluation can be used at distances of more than 1,500 yards with superb accuracy. At closer ranges, especially those associated with MOUT (military operations in urban terrain) that characterize much of the operations in Iraq and for law enforcement, where engagement distances are almost never farther than 100 yards/meters, the .408 offers the precision marksman the capability to defeat targets that would resist any .308 bullet and many .338 Lapua Magnum rounds.