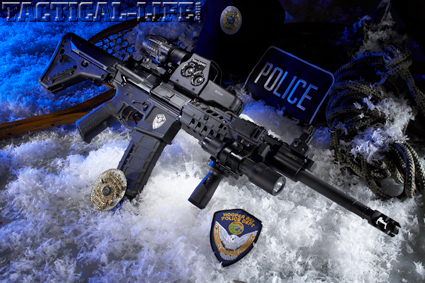 A funny thing happens at a wind chill of 80 degrees below zero: Guns stop working. That trustworthy AR you bet your life on in the 120-in-the-shade deserts of Iraq faces a whole new set of problems when the mercury drops back into the Ice Age. 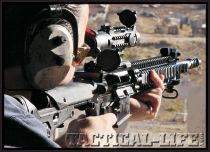 So if you’re the Police Chief of the Hooper Bay, Alaska Police department, where the average snowfall is more than 75 inches a year, you need a patrol rifle that can shrug off cold that threatens normal operation. That’s why after exhaustive testing, Chief James Hoelscher turned to the much warmer climes of Southern California and the fine gas-piston upper made by Addax Tactical.

Hooper Bay, Alaska, is the largest Yupik Eskimo village in the state, with 1,300 residents living on a peninsula south of the Yukon, on the coast of the Bering Sea. Chief Hoelscher’s small department is not only responsible for keeping the peace in the city, but also ensuring the safety of the Hooper Bay Airport, for animal control, EMS response, and did I mention they mostly comprise the city’s Volunteer Fire Department?

“Out here you have to wear many hats,” Hoelscher explained, “All of my officers are certified Emergency Trauma Technicians.” While major cases like homicides and sexual assaults are referred on to the State Police and their greater resources, dealing with the crimes in Hooper Bay is up to the local PD, “We are the first to arrive,” he continued, “so we have to be prepared to face anything.”

Image Building
The first thing Chief Hoelscher had to face when he took office was a department with a bad reputation among the local citizens. “We had some bad apples in the department, and that gave us a bad image.” So he remade the department, letting the questionable officers go and hiring new ones. Getting new uniforms. “We didn’t just get new versions of the old uniforms, we got whole new designs, with new patches and badges. The majority of our calls are domestic violence and alcohol-related felony assaults. But these are our people. I did not want them to get inflamed by seeing the same old police that they had come to distrust coming through the door. I wanted them to see an entirely new department.”

With the new look came a new mission statement, “To work in partnership with our citizens to create safer communities and preserve our unique way of life.” Hooper Bay is a community with more than 90% Yupik Eskimo population, and Hoelscher, a lifelong resident and half Yupik himself, knew that along with advanced training, his officers needed the best equipment to protect themselves and the citizens. Patrolling year-long in ATVs and snow machines, the department personnel are issued Remington 870 12-gauge shotguns and .40-caliber autoloading pistols. The department will approve any .40 that proves reliable, but Hoelscher favors the S&W 99, their version of the Walther P-99. He’s tried other .40s but finds it draws better from the Safariland 070 holster beneath his parka. That’s a leather holster, by the way, because plastic holsters get brittle under the constant cold.

Loaded for Bear or Belligerents
The Hooper Bay PD officers must qualify on each firearm every year, but Hoelscher explained that was just the tip of the iceberg, “My people are constantly shooting. They’re all hunters, recreational shooters. When they are not shooting for the force, they are out shooting on their own.” The high level of shooting ability comes in handy when faced with non-human threats like Polar bears. The department stocks a .45-70 lever-action Marlin and a .450 caliber AR, but rarely gets to use them, “Every house in Hooper Bay has at least 10 rifles in it,” Hoelscher laughed, “Usually a threat like that is taken care of before we can get there!”

Bears are covered, but the human threat in towns of any size these days comes from the drug dealers that migrate in from large cities to sell their wares in Hooper Bay. “We’ve had several drug busts working in cooperation with neighboring jurisdictions, so we needed a reliable semi-automatic rifle.” For the department’s patrol rifle Hoelscher had originally chosen the Bushmaster 5.56mm Carbine, but quickly discovered that normal direct-impingement gas system AR rifles, which require a lot of lubrication for reliable functioning, would not work in the harsh climate of Alaska. 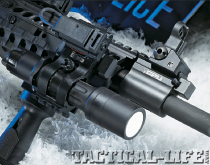 He explained, “At below 20 degrees a lot of these gun lubes will solidify. Also, the rifle is in my heated truck as I drive to the call. Soon it’s outside where it’s below zero. Then back into the car, or the suspect’s house. The change in temperature causes condensation inside the action, and combined with the sluggish lube, the gun locks up.” Hoelscher heard about the new gas-piston systems, which offered reliability without excessive lubing.

By now the gas piston operating system conversion for AR-15 style rifles is well known to TW readers. It replaces the direct-impingement system of the original AR design and exchanges the long gas-tube running from the gas block under the front sight with a short-stroke piston. As used on the FN SACR and HK 416, gas-piston actions don’t send burning gas and fouling back into the receiver. This leads to a cleaner AR, as fouling around the bolt carrier group is all but eliminated.

The Chief did some research and de­­­cided on the Addax GPU—a modified PWS gas piston upper receiver made by Chris Haddadian’s Addax Tactical in Chatsworth, CA. Chris is one of the premier builders of AR-15 gas-piston upper assemblies and also a dealer/distributor of AR-series weapon parts, accessories and tactical gear. A family operated business since 2007, the Addax Tactical team comes with more than 40 years of family experience in military and government service, plus more than 20 years in firearms collecting and shooting.

It was Chris’ total confidence and knowledge about his product that convinced Hoelscher to try out the GPU. “That Chris knew what he was talking about is what made his system work for my needs.” Addax is not a manufacturer, per se, but they don’t just slap an existing PWS conversion kit into their uppers. “We are a builder, and we are building our own dedicated gas piston upper called the GPU.” Haddadian explained, “We’ve worked extensively with PWS over the last two years and this relationship has enabled us to successfully incorporate their efficient AR piston system in to the Addax gas-piston uppers.” 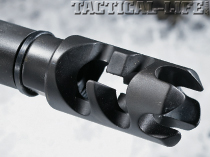 Ongoing Advancements
Chris is also constantly testing new barrel/upper combinations and working closely with manufacturers so they can specially machine their upper receivers to be used with the GPU. Addax also offers the retrofitting of most types of AR-15 upper assemblies to use their GPU/PWS Gas Piston System. “We’re using only high quality barrels and components that we have tested, and if they want, the operator can request his upper to include whatever custom features his mission requires.” Every GPU upper and retrofit is personally test fired by Chris.

It was this hands-on approach that impressed Chief Hoelscher. He custom-ordered the Addax Upper’s YHM 14.5-inch barrel chambered for 5.56mm with a 1:9 twist. Most ARs these days come with 1:7 barrels to get better performance out of heavier 60- to 70-grain bullets, but Hooper Bay PD issues Remington 55-grain Pointed Soft Point and American Eagle 55-grain XM177 Tactical FMJs. The upper was built on a Milspec 7075 T-6 receiver with a Bolt Carrier Group by Young Manufacturing. The rifle’s quad rail is the fine A.R.M.S. 50MCV, the flip up BUIS are from PRI and the flash suppressor/muzzle brake is the Addax Bulldog made for them by PWS that Chris says gives the best performance with his upper.

The Chief said Haddadian’s claims were borne out by his own testing. When the upper arrived, Hoelscher installed it on his Territorial Gunsmiths lower and took the rifle out into the snow. “I took it right out of the box and let it sit outside in zero degrees for several hours.” Chief Hoelscher recounted, “Then I brought it in to see if I could get condensation, then took it back out into the cold and fired it. It performed flawlessly.” Now he will begin getting the rest of the department qualified through patrol rifle training. “Addax is a great system. I have already ordered their 6.8 SPC GPU upper for long-range work.”

The best news is that Chris and Addax have developed in improved GPU with PWS that will be available by the time you read this. The Addax GPU Gas Piston Upper is not just for those who are full-auto shooters, or for LE and military—the GPU is a great choice for the AR owner who wants increased reliability with reduced maintenance. They back all of the components in their builds with a five-year limited warranty, in addition to the limited lifetime warranty from PWS on the gas-piston system components.

For current AR-15 owners who want a rifle that proved itself in the frozen Yukon tundra, that is cleaner and more reliable, the Addax GPU is worth a shot! For more information visit www.adxtactical.com. 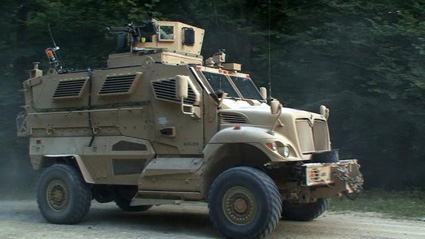 A funny thing happens at a wind chill of 80 degrees below zero: Guns…