The use of specialty cartridges and weapons in the police and military world is certainly not new. It drives a small but almost continually changing part of the industry. The very nature of specialty use means it is generally limited in scope, often short-lived, and very task-driven. There simply is no single weapon or cartridge that does everything an operator requires for any given mission, so innovation is key. As the threat and the environment change so must the equipment. Even truer in the military world, this relentless conceptualization has brought forth innovation, improvement, a few oddities, and occasionally some really valuable equipment. 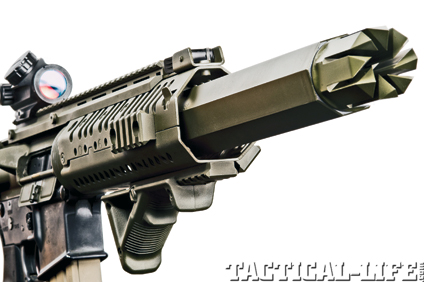 Designed in conjunction with the OSS Systems, the flash suppressor proved very useful. Not only does it reduce the flash signature significantly, but it also works well as a standoff device for breaching with frangible ammo.

Most missions in law enforcement are close range. Long range as a rule is 100 yards, and even that is infrequent. Often, the requirement is for effectiveness at 50 yards and in—generally across the room. It has spawned one of the longest ongoing arguments in the tactical world, whether to use a pistol or rifle caliber as a primary weapon. Many, if not most, have moved to rifles, some back to submachine guns, and others simply add a pistol caliber to their toolbox. A simple upper receiver conversion makes this easy and cost effective.

By adding a purpose-built weapon for specific tasks suited to slower, heavier bullets, you can make your choice as the mission requires. There are some things a big slow bullet does better than a tiny, fast one—something hunters have known for years. The results have been dozens of big pistol calibers that fire from the AR platform. They range from .30 to .50 caliber and everything in between. Most often they deliver considerably more energy on target than the typical 5.56mm but have a limited range. One of the most popular and best supported is the .458 SOCOM. 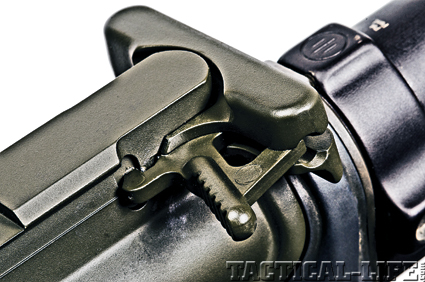 Precision Reflex’s Gas Buster charging handle with a Military latch is great for moving excess gas away from the operator when firing.