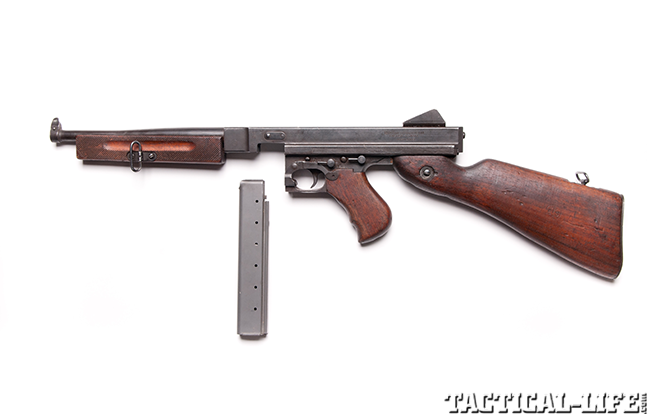 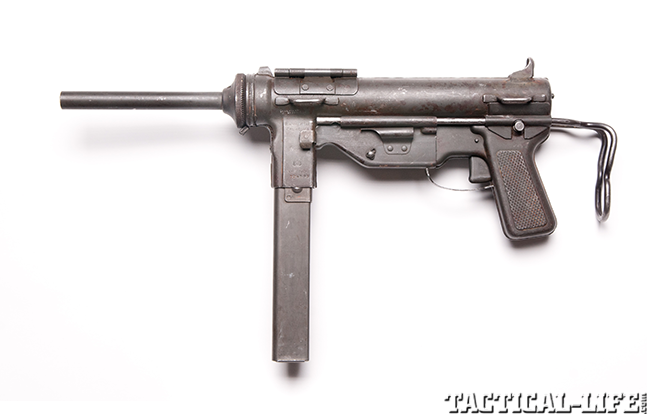 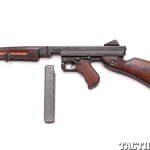 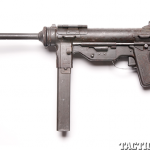 For the 2015 issue of MILITARY SURPLUS, author Nick Jacobellis profiled some of the “battle classics” from World War II and beyond. Among the author’s 10 selections for this roundup were the battle-hardened .45 ACP Thompson submachine gun and the M1/M3A1 Grease Guns.

“The famed .45 ACP Thompson’s military career began with the use of the M1921 by U.S. Marines in the Banana Wars. In 1928, the U.S. Navy adopted a modified version of the Thompson that included a slower rate of fire. In the years leading up to World War I, the U.S. Army also adopted a version of the Thompson called the 1928A1,” said Jacobellis in his review. “The evolution of the Thompson submachine gun led to the M1 and M1A1 versions, which featured several changes. The cocking handle was repositioned, the compensator was removed, and the new models were Parkerized, featured plain barrels and fixed stocks, and could use only 20- or 30-round ‘stick’ magazines.”

Further in the article, Jacobellis investigated the development and production of the M3 and M3A1 “Grease “Gun” designs by the U.S. military, models meant to succeed the Thompson design.

“To simplify production and reduce costs compared to the expensive Thompson submachine gun, the M3 and the M3A1 were manufactured using stamped and welded metal parts and a few critical machined parts. Known as the ‘Grease Gun,’ the M3/M3A1 was a straight-blowback-operated, .45 ACP submachine gun that fired from an open bolt. Featuring fixed sights and a retractable wire stock, the M3/M3A1 used a 30-round magazine,” noted Jacobellis. “Unlike the Thompson’s faster 600- to 800-rpm rate of fire, the Grease Gun had a slower rate of fire at 450 rpm.”

The Crewcut series of knives from 5.11 Tactical is made from AUS 8 steel...