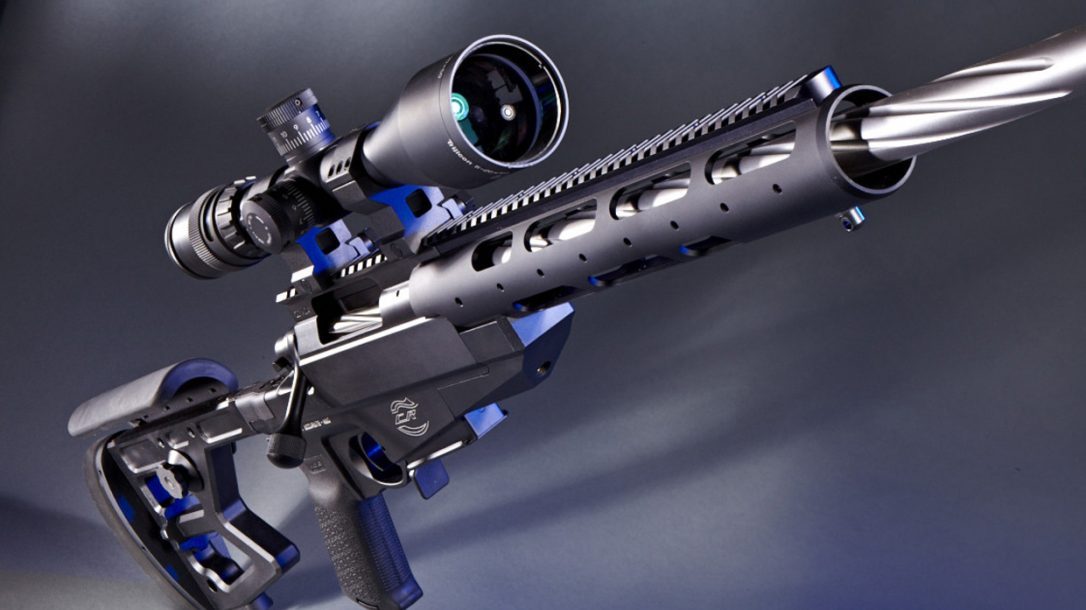 DPMS Compact Hunter 7.62
On 300-plus-pound Texas hogs, DPMS/Panther Arms’ Compact Hunter brings the potent big-game pop! Sporting a lightweight, 16-inch, Teflon-coated stainless barrel and a carbon fiber stock, the Compact Hunter tips the scales at just 7.75 pounds. With a single top-mounted, 6.625-inch-long Picatinny rail that can be used with a number of magnifying or other optical sights, the DPMS Compact Hunter also features a forward-mounted swivel to accommodate a carrying sling or folding bipod. The barrel is generously free-floated with a 5/8-inch clearance between barrel and the smoothly finished forend that measures a comfortable 6.75 inches in circumference. By upping the firepower while reducing the weight, DPMS put together a rifle suited for long hikes in the backcountry.

Savage Lady Hunter
Savage’s innovative lady and youth dedicated models hit the true fit and function marks! The key to the fit of the Lady Hunter is the uniquely shaped stock. It has a very high comb, which is deeply recessed on the right side. The wrist or grip is thinner and the angle of the butt pad is exaggerated. This allows for a much better interface with a woman’s body and compensates for the shorter fingers, longer necks and differently shaped shoulders. The shape of the comb also allows a great deal more flexibility in scope positioning. Aside from all these unique features, the Lady Hunter sports the excellent Savage AccuTrigger, a detachable box magazine, Weaver-style scope mounting bases, a three-position safety, sling swivel studs, pillar bedding, and a 20-inch version of their lightweight barrel.

JPE LRP-07
JPE’s LRP-07 in 6.5 Creedmoor is built and bred for speed, accuracy and winning! One change to the Long-Range Precision lineup is a rifle that features durable upper and lower receivers machined from solid 7075-T6 aluminum billet. The JP Low Mass Operating System weighs 14.7 ounces compared to an .308 AR’s bolt, which weighs 19.4 ounces—a 24 percent reduction. Counteracting the lighter bolt assembly is a heavier recoil spring in the LMOS. The JP spring weighs 5.35 ounces, and the standard .308 AR spring weighs 1.75 ounces. Another departure from the .308 AR-platform rifles is the LRP’s unique left-side charging system. It produces a shorter stroke, a little more leverage potential, and is easier to use than the T-handle of the .308 AR. You can charge the LRP-07 without dismounting the rifle, or losing your cheekweld, and the handle itself folds back automatically to minimize the rifle’s overall profile. The LRP-07’s modular handguard uses a smaller, more manageable diameter tube, and the free-floating design allows a hunter to brace the rifle anywhere along the tube without creating a point-of-impact shift.

Kel-Tec RFB .308
Buck the hunting rifle trend-big time-with Kel-Tec’s Bullpup RFB .308! To create a truly ambidextrous carbine, Kellgren designed the RFB to expel fired cases forward: After firing the last round in the magazine, the rifle is cleared by tilting the rifle muzzle down, activating the bolt release lever and dropping the bolt. The trigger mechanism is also unique among bullpup carbines, and is one of the smoothest compared to many other commercial semi-auto rifles. The ambidextrous safety has levers on both sides of the rifle, and disconnects the trigger and blocks the hammer action.

Magnum Lite 22
Superb looks, great accuracy and oodles of variants! MRI’s.22 rifles are ready for all-day plinking! Chambered in .22LR and .22 WM, the major design feature that sets these rifles apart is their Magnum Lite graphite fiber-wrapped bull barrels. 17 inches long for the LR (weighs 13 ounces) and 19 inches long for the WMR (16 ounces), both these rifles feel feather light and handle like a dream. Both MLR receivers are CNC-machined from 6061-T6 aluminum forgings to tolerances tighter than the norm. This gun employs a chamber whose front half is reamed to slightly tighter tolerances with regard to diameter and throating and whose rear half is reamed more generously so as to better meet the optimal conditions for a semi-auto in terms of feeding, chambering and extraction.

Remington 783
When Remington rolled out its sleek Model 783 we had the story of the first buck shot with it! The 783 has a proprietary cylindrical receiver with a minimally sized ejection port and a 22-inch magnum contour barrel (24 inches for 7 Mag.) attached to the receiver with a barrel nut system. The push-feed bolt has dual, opposing locking lugs, a 90-degree throw and a sliding plate-style extractor. The bolt handle is a bit larger than the Model 700’s bolt. With a free-floating barrel to enhance accuracy, the rifle is fed by a metal detachable box magazine with a secure latch. Remington’s proprietary recoil pad is standard on the 783 and helps to minimize recoil. Available in .270, .30-06, .308 and 7mm Rem, this is one of America’s most affordable hunting rifles.

Mossberg MVP 7.62
The July 2013 issue of Rifle Firepower offered a first-look at Mossberg’s new “hybrid” rifle in big-game country! The first MVP from Mossberg was chambered for the 5.56x45mm NATO (.223 Remington) and was specifically configured as a varmint rifle. To get the rifle’s bolt to dig a cartridge out of those magazines, Mossberg altered the bottom of the bolt head by adding two bumps or guides that are able to push the cartridge out of the magazine regardless of whether it is positioned on the left or right side. Also noteworthy is the 20-inch fluted barrel and Mossberg’s excellent LBA trigger, which is fitted with a center level to prevent its being pulled unless the lever is pressed.

X Caliber System
In a survival scenario, a single gun with multiple functions can be a lifesaver! The X-Caliber Gauge Adapter quickly converts any side-by-side or over-under shotgun into a rifle. Adding any of the eight X Caliber barrel inserts allows a 12-gauge chamber to fire 10 different calibers, both handgun (9mm, .38 SPL, .357 Magnum, .45 Colt and .45 ACP) and rifle (.308 Winchester, 7.62x39mm, .223 Remington and .22 LR). In addition, the .45 Colt insert allows a 12-gauge barrel to be stepped down to .410 gauge. That’s a lot of options, especially if you find yourself in a situation where the only ammo available is what you can scrounge up. The entire X Caliber barrel set comes in a convenient-to-carry canvas belt case that allows easy selection of a chamber insert for use in the field.

Steyr SM12
For the fields or the range, Steyr’s Mannlicher’s Euro-American optimized hybrid hits the mark! Differing from the other fat-bolt rifles currently on the market, the SM12 has two rows of 180-degree opposed locking lugs, but, in terms of strength, it still has about the same shear and lug contact area as three- or two-lug actions. The SM 12 also features a detachable magazine of the one-piece polycarbonate type with integral feed lips and a polycarbonate follower, which, at one-third the weight of the steel variety and virtually indestructible, maintains very tight feed-lip tolerances and has a natural lubricity and silence that steel doesn’t offer.

Colt M2012
The bolt-action M2012 is hand-built to win with speed and pinpoint 0.5-MOA precision! The three-lug design makes for a short, 60-degree bolt lift and a fast-cycling action and its equipped with a spiral-fluted bolt using a side bolt release, tactical knob and external extractor. A 20-MOA top rail is solidly mounted to the action. The tapered barrel measures 0.87 inches at the muzzle, making for a heavy target profile. Button-rifled with six grooves and a 1-in-10-inch twist rate, it is fitted with Colt’s custom muzzle brake using a small shoulder, “timing” it nicely. With superb accuracy and solid ergonomics, the Colt M2012 will do well in any competition field. 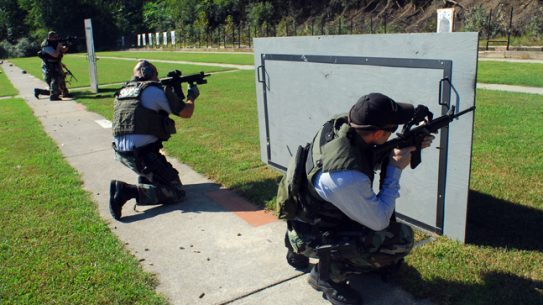