The “farmers” Ralph Waldo Emerson described in his immortal “Concord Hymn” took on the British Army in 1775 with pure guts and their home-kept weapons. They lacked an essential element that is the heartbeat of today’s professional military and law enforcement operations: Training.

Today’s array of effective, complicated, high-tech weapons become as combat-ready as a pile of rocks without the training to use them. That’s the reason, of course, professional operators find their daily activities and schedules filled with the seemingly ever-present word, training.

In the early days of World War II, the word “marching” became a standard substitute for real training. Endless hours of marching—a practice later seriously questioned by many military experts and historians. Other than teaching discipline, following orders, and providing mild physical exercise, marching has limitations when compared to real training—the kind of training that takes you into using gear, firing weapons, and effective tactics.

In this March 2008 issue, as in our previous issues, these pages are replete with reports on new weapons and accessories for military and LE. They are also packed with emphasis on tactics and training—the final preparations for taking on missions fraught with danger. Our feature coverage includes “The Evolution of One-Shot Kills,” an insider report on the latest sniper weapons, tactics and training. The comprehensive, illuminating article cuts through myths and misinformation and takes you into the field with today’s pros who take the skills of sniper deployment to new levels.

From rifles to pistols, our coverage shifts from sniper rifles to the ever-present .45, celebrated in “Return of the King” Here’s why the 1911 platform reigns supreme, with new tweaks and the latest training techniques, on-duty and off-duty.

Rifle or pistol, you can’t hit what you can’t see, and “Mission-Adaptable Glass” focuses on new enhancements for taking on targets near or far, in any light conditions. We cover the sights that has the Army excited and why they’re so effective.

The training for Special Ops, S.W.A.T., and Rescue-Ops missions is being enhanced in new gear and tactics covered in “Special Ops Breaching,” all about the latest in forcible entry; “Rescue Ops Blades,” knives that make the difference between life and death when seconds count; and “Mean Street Ready,” which shows how a superbly trained tactical team is alert and ready to roll.

The IED menace in Iraq is the subject of “Protecting the War Fighter,” which focuses on new war wagons and tactics. You’ll see what’s being done to HMMVWs to make them more powerful and safer for a broad spectrum of missions.

Our Iraq coverage doesn’t stop there. In “The Fall of Fallujah,” you’ll see how Marine deployment in the toughest battle of the war in Iraq pulled the curtain down on a bloody stand-off.

And speaking of Marines…our favorite, The Gunny, is on board as usual. This time he has a serious warning about ways terrorists may “strike” next. “All they need”, says Gunny, “is a box of matches.”

And what we need to stop them are trained, dedicated people. We seem to be getting more of them every day. Part of TW’s mission is sharing info with our operators, keeping them safe while fighting today’s wars and, preventing others 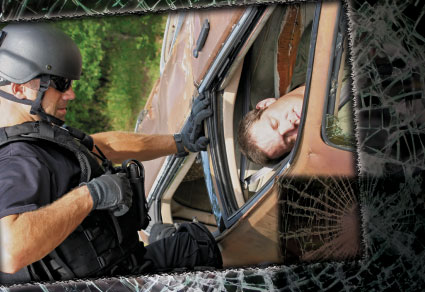 When seconds count, a rescue tool or knife can make the difference between LIFE...