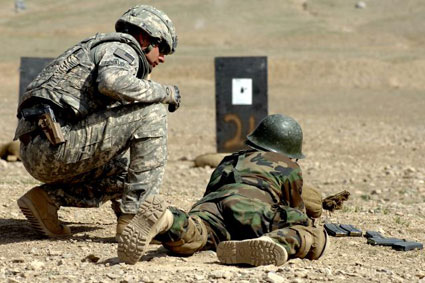 “Critical to this strategy is really the buildup of the Afghan security forces — the rapid increase in both the Army and police,” Navy Adm. Mike Mullen, the chairman of the Joint Chiefs of Staff, told reporters during an afternoon news conference held in his “E” Ring Pentagon office.

“And, those 4,000 trainers are absolutely at the heart of being able to do that as rapidly as possible,” Mullen said.

Besides the trainers, Mullen said, the president had previously approved deploying 17,000 additional servicemembers to Afghanistan. Some of those troops will be posted in the southern portion of the country to battle resurgent Taliban insurgents.

The extra forces earmarked for Afghanistan will meet this year’s troop requests of Army Gen. David D. McKiernan, the top U.S. military commander in Afghanistan, Mullen said. The added forces will bump the total U.S. military strength there to more than 62,000.

Mullen said he is hopeful that America’s NATO allies could contribute more resources, military or civilian, to the Afghan campaign.

Al-Qaida continues to hide out in Pakistan’s northwestern regions adjacent to its border with Afghanistan, but Mullen said he’s buoyed by improving relations between the U.S. military and the Pakistani army. The Pakistani frontier troops, he noted, should be praised for their increased actions against al-Qaida terrorists.

The new strategy also calls for a “civilian surge,” Mullen said, that will involve specialists in economics, reconstruction, rule of law, and governance from across the U.S. government, including allies and nongovernmental agencies.

“It won’t make any difference how many troops we send if we don’t get the civilian piece right,” Mullen said. “And, it’s not just civilians from the United States, it’s civilians, as well, from our NATO partners and other countries who are participating.”

Senior U.S. military and civilian leaders in Afghanistan, Mullen said, will be assessing the impact of the new strategy later this year.

Mullen said “a great deal” of his and other senior Pentagon military and civilian leaders’ thinking is reflected in Obama’s new Afghan-Pakistan strategy.

Obama’s new Afghan-Pakistan strategy is the product of months of interagency brainstorming between senior national security and diplomatic officials at the White House, State Department, Pentagon and other U.S. government agencies. The United States also reached out to obtain input from NATO and other allies.

At today’s White House news conference, Obama told reporters it is imperative that the United States and its allies defeat al-Qaida terrorists lodged in parts of Afghanistan and western Pakistan and bring security and stability to both embattled countries.

“So, I want the American people to understand that we have a clear and focused goal: to disrupt, dismantle and defeat al-Qaida in Pakistan and Afghanistan, and to prevent their return to either country in the future,” Obama said at the news conference.

“That’s the goal that must be achieved. That is a cause that could not be more just,” the president said.

Back at today’s Pentagon news conference, Mullen noted that pressuring al-Qaida and the Taliban, and assisting Afghans to realize a better future, are key to the success of the counter-insurgency campaign there.

“We’ve got to have a year, this year, I believe, that starts to stem that violence” in Afghanistan, Mullen said, while focusing on earning the support of the individuals that are the “center of gravity” of the effort.

“And, that’s the Afghan people,” he said.

WASHINGTON- The pending deployment of thousands of U.S. military trainers to Afghanistan to instruct…