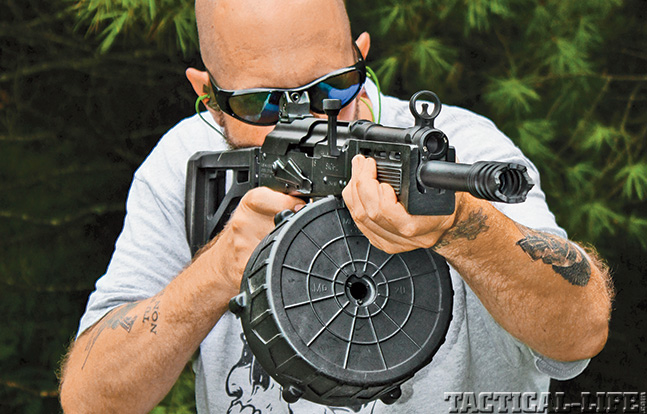 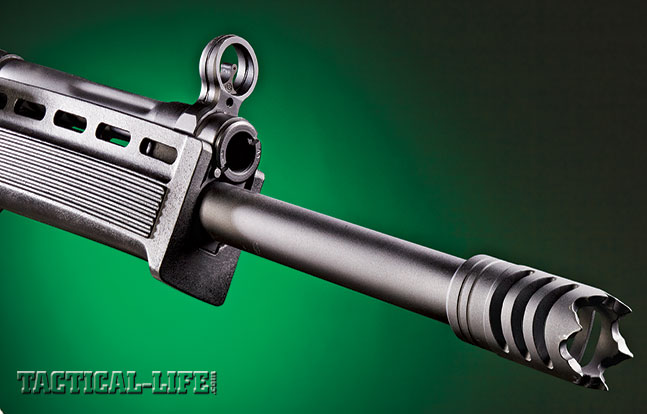 2 of 9
TRomix-2
The aggressively styled “Shark” brake muzzle device tops off the barrel of the Tromix S17. Those familiar with AK-pattern weapons will be right at home with the Tromix S17. Note the familiar dustcover/safety unit. 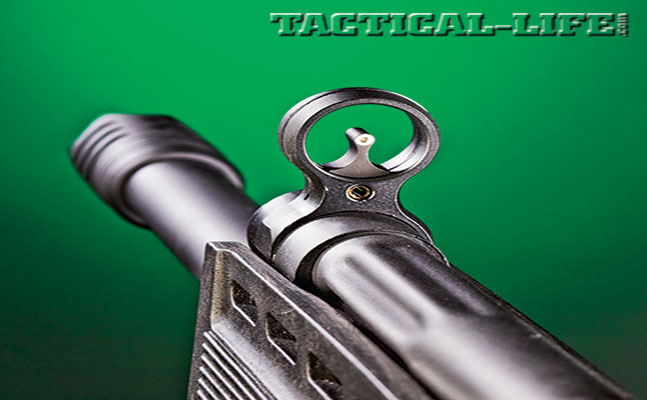 3 of 9
TRomix-3
The sights of the Tromix S17 are XS Sight Systems’ front tritium night sight. 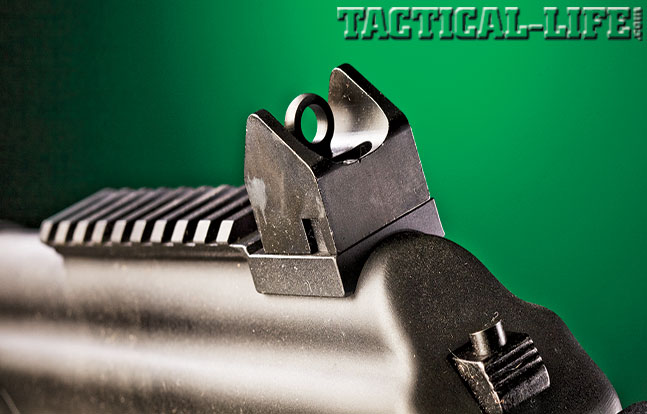 4 of 9
TRomix-4
A heavy-duty winged rear ghost ring enhances sighting of the weapon. 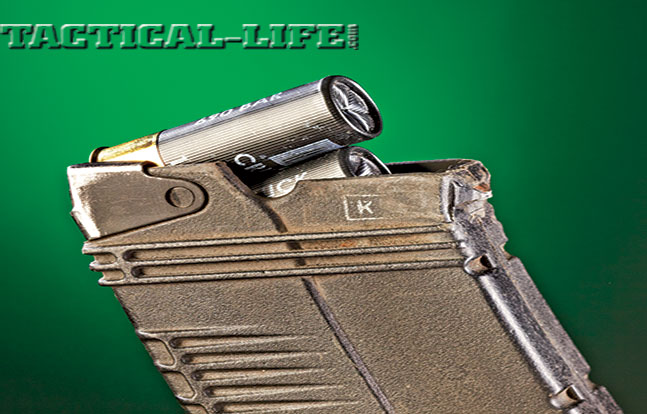 5 of 9
TRomix-5
The single-column magazine feeds rounds in a straight line into the chamber for enhanced reliability and performance. 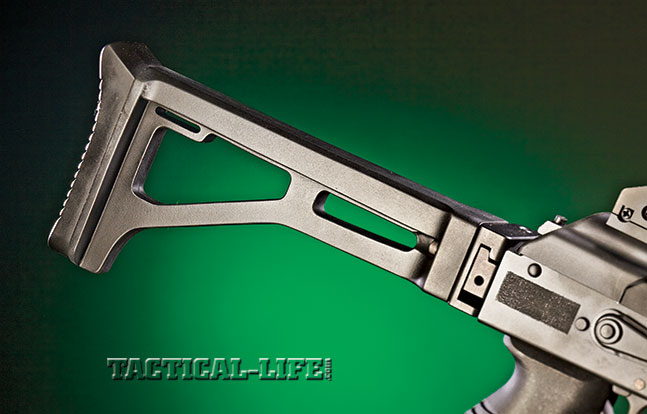 6 of 9
TRomix-6
The Tromix skeletonized folding stock is sturdily built and features a recoil- absorbing buttpad. 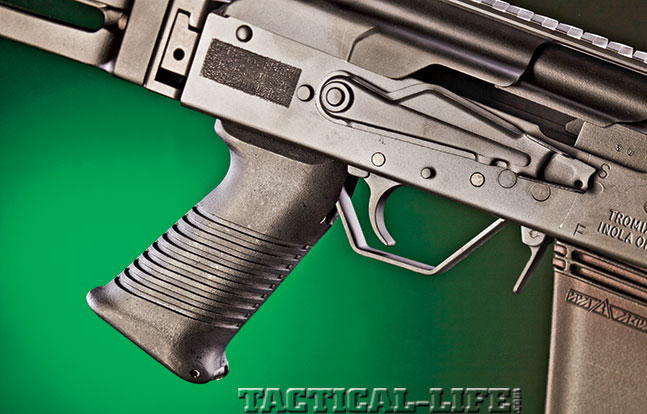 7 of 9
TRomix-7
A SAW-style pistol grip on the Tromix S17 adds to the shotgun’s impressive handling characteristics for the user. 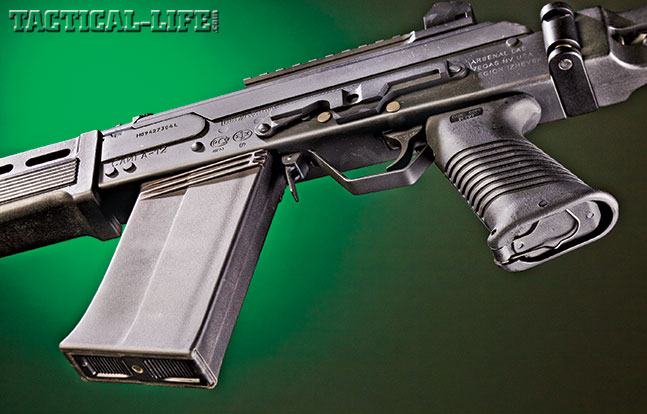 8 of 9
TRomix-9
The Tromix S17 feeds from a detachable box magazine, delivering a great deal of 12 gauge firepower downrange. 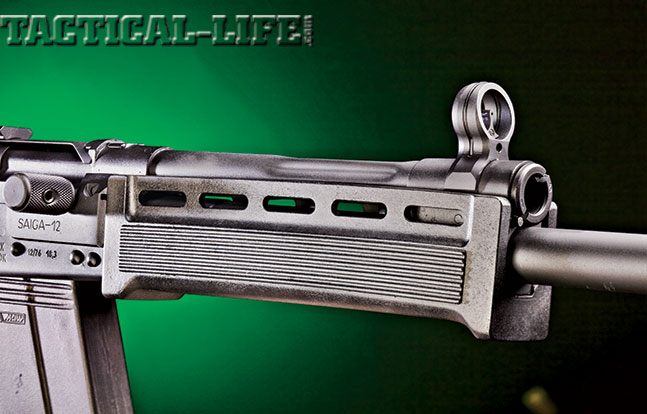 9 of 9
TRomix-10
The Galil-style handguard offers good ergonomics and handling of the powerful Tromix S17 12 gauge. Note the cooling vents along the side of the forend. 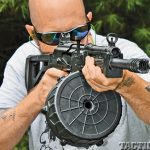 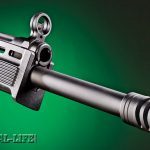 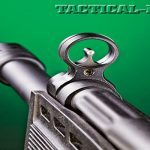 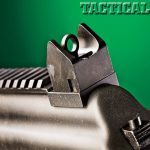 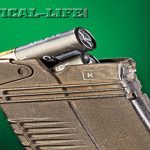 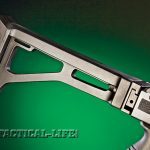 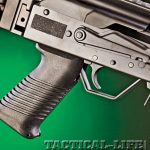 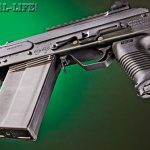 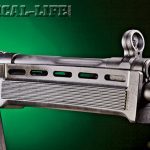 Imagine pulling into the range and uncasing your newest AK. As your shooting buddies enquire what you brought this day, they get a peek of what appears to be a high-speed, customized AK of some type. As they come closer, they see it looks a little different from theirs, but it is clearly a Kalashnikov design and they can’t put their finger on what may be different. You ask them to just see how well it shoots and to stand back and watch the impact area. They know something special is about to happen as the massive 12-round magazine gives away another touch of “normalcy” and when the trigger breaks the sear and huge, plastic hulls start streaming from the ejection port as fire bellows from the custom “Shark” muzzle brake. The watermelons and milk jugs previously placed on the target stands vaporize before their eyes and as soon as the magazine is empty it is time for “show and tell.”

If you are a student of the school of “bigger is better” with an interest in the time proven AK-47 design, you may want to start thinking about adding bulk-pack 12 gauge ammunition to your wish list. It is time to get acquainted with what may be your newest addiction and formally meet the Tromix S17.

At this point it would be unusual for anyone reading these pages to be unfamiliar with the base gun in this custom build, the Saiga-12 shotgun, but let’s take a brief look at it just in case.

Manufactured in Izhevsk, Russia, at the famous Izhmash plant, the Saiga-12 has its roots deeply planted in the birthplace of the very facility originally founded by Russian Tsar Alexander I in 1807. This famous facility has been the birthplace for millions of firearms and other military-related equipment. Today, as well as several other products, the Saiga-12, a smooth-bore, self-loading shotgun is among the lineup in several configurations. It is manufactured and imported into the United States with a straight stock and a magnum chamber to accept both 2¾- and 3-inch 12 gauge shells. The obvious appeal to AK aficionados, combined with its ability to accept a detachable magazine, has helped make it an extremely popular shotgun. It has a reasonable price to boot. All these factors combined aided in the popularity greatly, but poor quality control and a lack of consistency from gun to gun led to many rumors about the dependability. It seems much better these days, but due to this early reliability issue and a little American ingenuity, several companies were formed around this platform, both to repair the concerns and assist in an upgrade in function and aesthetics. This brings us to the American S17 version and Tromix Lead Delivery Systems.

Tony Rumore founded Tromix in 1999, and the company has been responsible for some very radical gun designs with some of the most interesting (some would say radical) gun projects in recent memory. With a company philosophy that plainly states “Entertainment is our main objective” and a proven commitment to high quality over mass quantity, Rumore has had gun enthusiasts gawking over some of his wild creations since he hit the industry.

Early on, Tromix’s specialty leaned towards the big-bore, black rifle market. Rumore was an early pioneer in such projects as the Sledgehammer series, with chamberings including .44 Auto Mag, .440 CorBon, .458 SOCOM, .475 Tremor and .50 Action Express. Since this was a little before the time when these increasingly popular big bores really took off, Rumore shelved the Sledgehammer series and kept searching for a larger market share. He seems to have found his calling in the Tromix/Saiga series and continues to specialize in this area today.

The signature model today for Tromix is the 8-inch-barreled “Micro-12” model. It is a custom-built, Kalashnikov-based 12 gauge with a Shark brake and HK battle sights. The reliability has increased several-fold from the original stock guns, and almost any 12 gauge round will cycle and feed with ease. For a gun known for being finicky with ammunition, it is a great leap to have this new-and-improved design eat everything you can throw in it (from bulk pack to low brass to heavy magnum rounds) reliably and comfortably.

As previously mentioned, even though countless people have been dedicated cheerleaders of the Saiga-12 series since its introduction, it has not been without controversy. It is no secret that the quality of each gun, even exact models, can vary greatly with every order. The greatest abnormalities in quality seem to be focused on the gas-piston operating system. Since I started researching the Saiga-12 guns, I have learned that the reason some are so finicky on ammunition is that the number and the diameter of gas ports are not always the same from one gun to another. There doesn’t seem to be any official reason for this, and among the most vocal enthusiasts of the Saiga-12 platform there just seems to be an accepted risk in buying these guns. Since the entire system is rebuilt and overhauled in the Tromix guns, it is a moot point. And for those looking for a fast and reliable quick fix, MD Arms has developed their adjustable “V-Plug” to help properly regulate and solve the shotgun’s gas problems.

When you send your factory Saiga-12 to Tromix for their basic fixed-stock conversion, it will receive the following upgrades for the price of only $395:

Several upgrades can be purchased at the time of the order, including shortened barrels (NFA and Title I lengths), folding stocks, threaded muzzles, night sights, HK sights, Shark brakes and much more.

When you decide to step into one of the most radical NFA redesigns, you have the option of the Tromix S17. This upgrade includes all the work previously listed with the following available options and accessories:

I have had several opportunities to bring the S17 out to test it and to solicit opinions and observations. For something I first thought may just be an interesting novelty, it turned into a “regular” on every outing, with people lining up to run a magazine (or a drum or two) at every opportunity.

Since stock, factory Saiga-12s have a reputation for excessive recoil, the interest in the S17 is usually just curiosity at first. After people watch others shoot magazine after magazine through it, all with the same smile and what would seem choreographed remarks about how low the recoil really is, their curiosity piques and they take the next position in line.

To clear up a little about the varying recoil reports in the stock Saiga-12s, we can offer this as another example of the inconsistency of the gas systems. I once thought it was just that some people were a little more recoil-sensitive than other people, but after firing a few with different experiences with supposedly identical guns, this writer can attest that some just have more recoil than others. The cause is most likely due to the inconsistent number and size of the gas ports. An excessive amount of gas will usually lead to excessive recoil, so this makes perfect sense. All that aside, the Tromix guns have this problem solved so it is no longer an issue.

Thus far I have shot skeet, partridge and several range-abandoned automobiles in huge quantities. Whether I was using a 20-round drum or any of the many stick magazines, it has yet to malfunction in any way. Although this writer prefers a stout load for “work projects,” it is pretty nice to have the option to break out several 100-round, bulk packs of #7 low-brass when everyone wants to try it. It is as easy on the wallet as it is the eyes (and the shoulder) at that point.

During the Maine ruffed grouse season I had the chance to take the S17 into the field and am pleased to report that if the shooter can do his part, the frying pan fills just as fast as in any previous season.

I posed the question, “Tool or toy?” to a few people who carry firearms (yes, long guns) for work, and the impression was usually the same. The short-barrel option makes the S17 a fantastic “up close and personal” gun. For building or vehicle entry, the short barrel and the eye-catching Tromix “Shark” brake should function great as a standoff device for breaching. The sturdy and serrated brake will break windows with little effort and stands almost no chance of sustaining any kind of serious abuse. Since it is a 12 gauge, it has the ability to fire several specialty rounds, from the fastest slug to many of the less-lethal rounds. The magazine feed allows the user to carry preloaded magazines with an assortment of ammunition, making load-type changes fast and simple. When this question was to be posed to Rumore, his company motto, “Entertainment is our main objective,” immediately came to mind—and we can attest that it is both fun and useful.

The Tromix S17 is a definite winner. It is very well made, with every aspect of fit, finish, quality and craftsmanship receiving high marks. It is a great looking gun, resembling a Krink that was blended with a Galil on steroids. Every relative shortfall of the original, factory Saiga-12 guns has been addressed and rectified, multi-fold. It is as fun to shoot as it is to look at, and has all the potential to be as serious a professional tool as it is just plain fun to shoot. As the ultimate compliment, this writer has already started a list for “thinning the herd” of numerous other scatterguns since shooting the S17 because the cold, hard fact is they will just keep pushing farther to the rear of the gun safe now. The S17 is the first one out in almost every shotgun application. If you are a big-bore fan with a passion for well-made, military-style firearms, the Tromix S17 will not let you down. 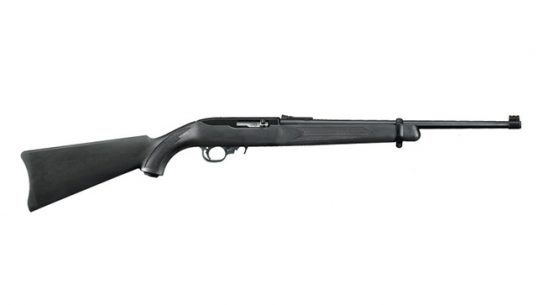 Ruger celebrates the 50th anniversary of its 10/22 rifle series with the release of...