From its blue/gray finish to its two-position stock and shorter barrel, Troy's GAU-5/A/A authentically recreates the rifle that helped the U.S. warriors raid the Son Tay prison camp.

Before there was Delta Force or SEAL Team Six, there was “The Raid,” the U.S. military’s raid on the Son Tay prison camp in November of 1970. This is also the title of the book by Benjamin Schemmer that was published in 1976, which tells the extraordinary story of one of the most daring raids in military history. Son Tay was a North Vietnamese Army-run prison located some 23 miles from downtown Hanoi. Intelligence indicated that 61 American prisoners of war were being held in the camp. As a result, two daring leaders—U.S. Army Brigadier General Donald Blackburn and U.S. Air Force Lieutenant General Leroy J. Manor—were tasked with bringing the boys home.

U.S. Army Colonel Arthur “Bull” Simons was selected to lead the raid. Simons was an unconventional officer who spent the majority of his career in special operations. This included tours with multiple special forces groups and numerous covert missions while assigned to the Military Assistance Command Vietnam Studies and Observations Group (MACV-SOG). The mission was codenamed Operation Ivory Coast in an attempt to deceive the enemy into thinking it would take place on the African continent. The daring plan called for 56 specially trained soldiers to assault the prison in the dead of night, neutralize any enemy threats, rescue the prisoners and exfiltrate—all in less than 30 minutes. While this might be a routine operation for today’s special operations units, it was unheard of in 1970.

Because of the close confines of the transporting helicopters and the CQB environment of the prison, Simon armed some of the raiders with the Air Force’s Colt GAU, the forerunner to the current M4. The GAU featured a 10-inch barrel with a flash suppressor that also acted as a sound moderator. The carbine weighed 5.2 pounds unloaded and was only 28.3 inches in length with the stock in the collapsed position. This was a significant improvement over the standard M16 at the time, which was 39.5 inches in length and weighed 7 pounds. Interestingly, the GAU was not equipped with a forward assist or shell deflector like the Army’s XM-177E2.

Steve Troy, the owner and CEO of Troy Industries, is an Air Force veteran and retired Massachusetts state trooper. He is a true patriot that loves his country and the military. To commemorate the 45th anniversary of the Son Tay raid, Troy has introduced a historically accurate reproduction of the GAU. In addition, Troy has partnered with the National League of POW/MIA Families so that a portion of the proceeds from GAU sales will support that foundation’s mission.

The Troy rifle is designated the GAU-5/A/A, and it’s a faithful reproduction of the original rifle. I was fortunate to obtain one of the new rifles for testing.

Unpacking the GAU-5/A/A, the first thing I noticed is the blue/gray Parkerized finish. I could almost smell the factory cosmoline. The GAU-5/A/A is built to military specifications and is chambered in 5.56mm NATO. As with the original GAU carbines, the upper receiver does not have a forward assist or shell deflector. The carry handle is integral to the upper receiver, and it features a dual-aperture rear sight.

In order to offer this to the civilian market without NFA restrictions, Troy installs a 12.5-inch barrel with a permanently attached 4.5-inch-long flash suppressor that replicates the original sound moderator. Unlike the original unit, the Troy reproduction is open and does not contain any chambers or baffles—it’s just for aesthetics. The fixed front sight/gas block assembly also serves as the mounting point for the front sling swivel. The round handguards feature six vent holes and, as with the original units, are interchangeable.

The lower receiver is also mil-spec, with military-style selector markings for safe, semi-auto and full-auto, although the gun is only a semi-auto—the safety won’t rotate to the full-auto position. The manufacturer’s markings are located above the trigger. This allows the left side of the magazine well to be marked with “PROPERTY OF U.S. GOVT., GAU-5/A/A, CAL. 5.56 MM.” This is a very nice touch that shows Troy’s attention to detail. The pistol grip has a mottled black finish that makes it look like an original unit. The lightweight aluminum buttstock is also period accurate and only has two positions, open and closed. Two slots allow for the installation of a combat sling. The fire control components are military grade, and the trigger on my test rifle broke at 8 pounds.

Troy went above and beyond with the accessories that come standard with the rifle. First, the GAU-5/A/A comes with a GI cleaning kit—complete with a toothbrush and bore rod—packed inside an authentic nylon pouch with an ALICE clip. The rifle also comes with a reprint of the technical manual for the XM-177E2 “submachine gun,” and reprints of the operator’s manual and the PM manual. The PM manual is a real flashback, with its cartoon drawings and a shapely model in a tight-fitting uniform. A Vietnam-style sling that uses paracord loops is also included. 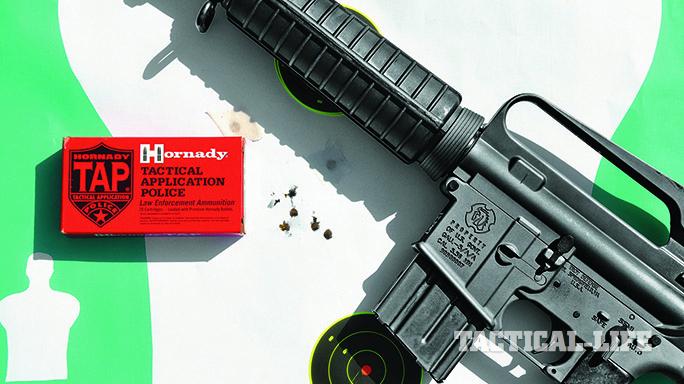 When I hit the range, I almost wished for my rip-stop jungle fatigues and canvas-sided jungle boots. Not having any Vietnam-era ammunition, I turned to three modern loads. While the GAU-5/A/A is a retro gun directed at collectors, it is still a fully functional and reliable rifle. As such, I tested the rifle with Hornady’s 55-grain TAP Urban and 62-grain TAP Barrier loads. I also ran a few hundred rounds of Aguila’s 62-grain FMJs through the rifle. I had absolutely no malfunctions and would feel fully confident using the GAU-5/A/A as a personal-defense rifle. The two TAP loads produced average velocities of 2,596 and 2,680 fps, respectively. The Aguila FMJs averaged 2,714 fps.

Having tested Troy rifles in the past, I know the quality of the company’s barrels and the accuracy potential of its rifles. In the case of the GAU-5/A/A, the groups recorded represent my ability to shoot groups with iron sights, not the capabilities of the rifle. Even so, I was able to consistently shoot groups in the 1.5- to 2-inch range with the rifle’s iron sights and mil-spec trigger.

Interestingly, the ability to accurately and rapidly engage targets was a point of concern for the Son Tay raiders. During the training run-up before the operation, when using standard iron sights, the marksmanship among the operators was so poor that it threatened the entire mission. According to Schemmer, “In live-fire rehearsals, Simons found to his dismay that at night even his best shooters were getting only about 25 percent of the rounds fired at 50 meters into torso-sized targets that simulated enemy soldiers standing up in a foxhole…Simons was genuinely concerned: Unless night-firing accuracy could be improved dramatically, it would take far too long to neutralize the opposition.” 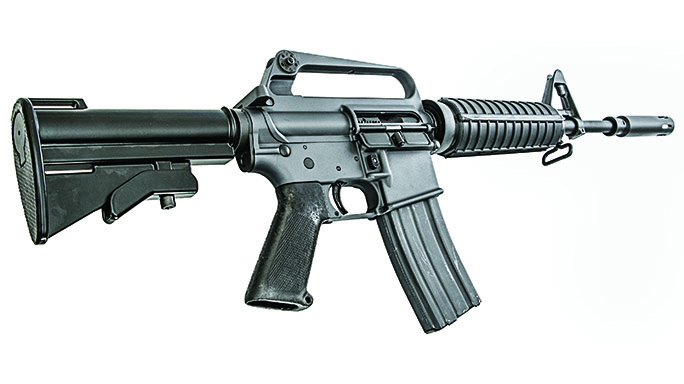 Members of the unit were also dismayed to find that the military had no night optic that was suitable for use on the GAU. As a result, they turned to the civilian market and the Singlepoint Occluded Eye Gunsight (OEG) scope from the Normark Corporation. The Singlepoint optic consisted of a scope tube with a plastic dome on the objective end of the tube. Dr. Earl Burress published an extensive article on the Son Tay raid in November of 2015 on the Soldier Systems website. According to Burress, when purchased in 1970, the Singlepoint cost $49.95 per unit. The unit came with a mount that indexed on the top channel of the carrying handle and mounted through the hole in the handle. Raiders reinforced this attachment with electrical tape.

The brightness of the “red dot” was enhanced with light gathered through the clear dome on the front of the tube. Illumination during low light was assisted by a radioactive isotope. In his Soldier Systems article, Burress stated, “The aiming dot was believed to be approximately 16 MOA.” Being an OEG-style sight, the user was required to keep both eyes open in order to superimpose the dot over the target. By all written accounts, the Singlepoint worked well during the training and the actual raid. Burress quotes the after-action report as saying, “At a distance of 25 meters, the poorest marksman could place all rounds in a 12-inch circle at night. At a distance of 50 meters, the same shooter could place every round in an E-type silhouette both day and night. The only advantages found in day shooting were speed in engaging the target and shifting fire.”

While I was unable to procure a Singlepoint optic, Steve Troy acquired a mint-condition unit for his collection. It is interesting that some 45 years later, virtually every military and law enforcement carbine is equipped with a red-dot sight. 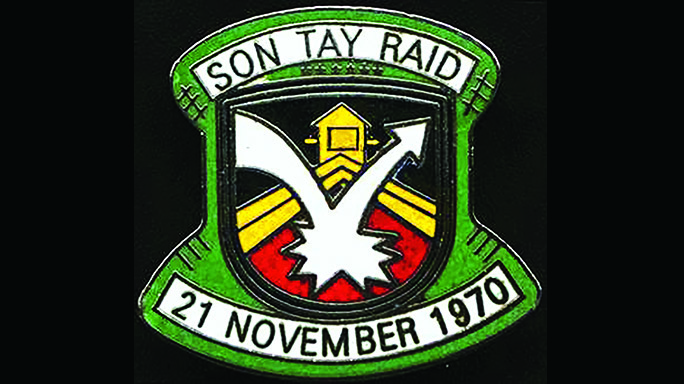 For those not familiar with the Son Tay story, when the raiders hit the prison, they found that all of the prisoners had been moved. Son Tay was a “dry hole.” From a military perspective, the raid was a tactical success and a number of Viet Cong were killed. In addition, a secondary camp was assaulted and a number of Caucasian advisors were killed. Most historians think that these were Russian advisors. The raid also struck fear in North Vietnam’s leadership. As a result, many of the American POWs were moved to the Hanoi Hilton for the remainder of the war. One additional historical note: The commander of the Son Tay assault element was a young captain named Dick Meadows, who would later play a critical role Operation Eagle Claw, the failed Iran hostage rescue in 1980.

I would like to personally thank Steve Troy and the Troy Industries crew for helping preserve a unique piece of history through this commemorative rifle. I’m certain that there are many Vietnam veterans and reenactors who will be interested in this and the XM-177E2. While billed as a commemorative reproduction, the GAU-5/A/A is a fully capable rifle that can easily serve the needs of the end-user. For a camp or truck gun, the lack of “accessories” is a plus. It would also make a great canoe gun!

For more information on the National League of MIA/POW Families, visit pow-miafamilies.org.