0
SHARES
15
VIEWS
Share on FacebookShare on Twitter
The Troy M7A1 PDW upper is supplied as an upgrade kit (less lower receiver) and is not yet offered as a complete rifle. Here, the upper receiver is shown with the Troy MRF rail system and Noveske KX-3 (as tested), and is also available with the new TRX rail and Claymore muzzle brake (also of Troy manufacture). The SBR was outfitted with the exceptional Aimpoint Comp M4s (not included), as well as Troy’s Modular Battle Grip.

That thing runs like a sewing machine!” As my friend stood next to me, mouth slightly agape, in awe of what he had just witnessed. The final day of testing had just concluded, and we were both standing in the settling dust and drifting gunsmoke, looking almost incredulously at the diminutive rifle slung across my kit. Over the past two days, the 7-inch Troy M7A1 upper receiver had fired over 1,500 rounds of mixed 5.56mm ammunition without so much as a hiccup, and had grouped one exceptionally tight, cold-bore string at 100 yards, measuring in at only 1-MOA.
Meet the M7A1 Personal Defense Upgrade Kit; a blend of form and function recently introduced by Troy Industries. No stranger to the tactical community, Troy is a manufacturer and purveyor of high-quality upper receivers, rail systems, and weapons accessories. Perhaps best known for its BUIS sights, which have become an industry-wide standard item, these precision-machined parts are now OEM equipment on many fine tactical rifle offerings from several major firearms manufacturers (including Ruger and Smith & Wesson). Troy’s excellent MRF and TRX handguards are also very well respected and also come standard on several models of the S&W M&P 15T Rifle, as well as the new Ruger SR-556 gas piston rifle. 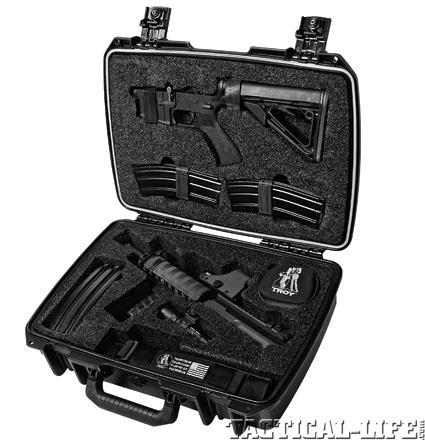 Gun Details
According to Steve, the M7A1’s excellent performance is the direct result of a synergy created by mating some of the finest components available. Starting with a 7.5-inch, 1-in-7-inch twist, stainless steel barrel chambered in 5.56mm NATO, Troy then adds either a Noveske KX-3 flash suppressor or a Troy Claymore muzzle brake, both of which give the gas system and muzzle velocity an added boost, comparable to a barrel nearly 2.5 inches longer than the one to which either is affixed. The barrel assembly is then mounted to a Mil-Spec upper receiver and enshrouded by Troy’s free-floated MRF or TRX Battle Rail handguards. The completed receiver is then charged with a MP inspected Mil-Spec bolt, bolt carrier and charging handle. The completed receiver is topped with Troy’s M4 pattern front and rear folding BUIS sights, and Troy’s Modular Battle Grip is added for additional controllability. All of these components are shipped encased in a Hardigg Storm Case, replete with pre-cut closed-cell foam inserts. As an added touch, Troy also includes an Orvis cleaning kit adorned with the Troy logo, and a Troy single-point sling. 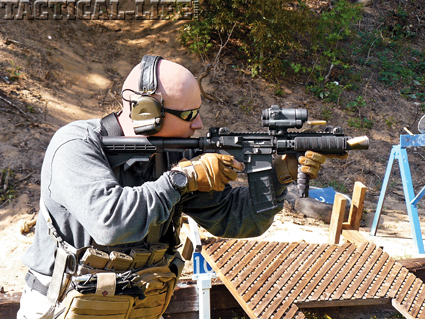 The author squeezes off a long burst on full-auto—notice the pronounced lack of muzzle climb, as the expended cases are still suspended in mid-air. The weapon was found to be extremely controllable and reliable in all rates of fire.