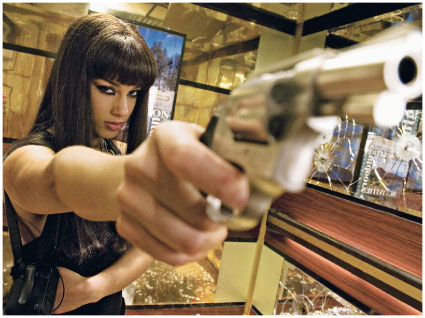 Scopes on backwards. One-hundred-round magazines on .38 Special revolvers. The people most affected by Hollywood’s portrayal of police and military operators are you, the operators in the audience. The impression that digital images make can create heroes, or monsters, and affect the way the rest of society views our frontline troops whether they wear blue or ACU camo. It’s only fair that we occasionally let some of our readers sound off about good and bad stuff they’ve seen after plunking down their hard-earned cash for a night at the movies or a DVD rental. 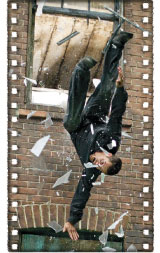 Bad Hollywood: Don’t Cock That Glock!
TW reader Paul K. writes, “One of the things that I have noticed on TV that drives me crazy is when I see a person, like David Caruso on CSI Miami, either cock, or decock a Glock. It may be a Hollywood thing to make the motion, and hear the sound.”

It sure is a Hollywood thing, and one of my pet peeves, too! The truth is, the use of Glocks in all facets of police and military work has happened so quickly that the sound technicians on movies haven’t been able to catch up. A lot of these guys are not shooters themselves, and they’re still using the sound effects pulled from the library—with names like, “Pistol Cocking” and “Rifle Shot.” These sounds are put in after a scene is shot—the same sounds you’ve heard for hundreds of different handgun scenes.

In the great Nicolas Cage historical treasure-hunt thriller National Treasure, when Federal Agent Harvey Keitel and his men enter Jon Voight’s house with Glocks drawn—you can hear the sound of pistol hammers being thumb “cocked”—even though the Glocks’s Safe Action has no external hammer!

A hero to Hollywood gun guys is Ben Burtt, the Academy Award winning soundman who did the sound effects and mixing for the Star Wars movies, for his work on the great gunshot sounds in Raiders of the Lost Ark. Indy’s .45-caliber revolver sounds powerful and distinctly different than the 9mm Browning Hi-Power he uses for part of the Tibetan bar shootout. Ben would never cock a Glock.

Bad Sounds: Deadly Sonic Bullets
Astute TW reader Rob noticed another Hollywood “Blooper” that has a similar explanation: “There’s something in movies that really gets to me. It’s when the actor has an autopistol, fires a few shots, the slide locks back because the weapon is empty but the pistol continues to fire. Sure wish my pistol would do that, fire with no ammo. This is as bad as having old west cowboys shoot 15 shots out of a Single Action Army!”

Of course, those movie guns are firing sonic bullets—made specially by Studio armorers, they make the sound of gunshots even when the slide is locked back, or when magazines are absent from the gun completely.

Just kidding. This is, again, the responsibility of a person called the sound editor who has put in the sound of firing bullets after the scene has been cut together. He’s only looking at the picture and sees an actor standing there, pointing a gun like he is shooting. So he just adds the sound.

Even more frustrating to me is when the hero and the bad guy confront each other after a long running gun battle and both of their guns are empty—but the slides are still forward—so they can pull the trigger and just get “click.” I’ve had a few competition magazines that would not lock the gun open on the last shot, but they were designed for guys who were not letting the gun run dry.

Bad Physics: Look Up In The Sky—Super Bullets!
TW reader Ray L., a fire fighter and shooter from Long Island, NY noticed: “I’m no physics major, but I’ve been shooting and reloading for 20 years and I know that a bullet weighing even 230 grains out of a .45 doesn’t have the power to make a 200-pound man fly back through the air on impact.”

Ray’s right! A 230-grain bullet from a .45 will not lift a 200-pound man off his feet and throw him back 10 yards and through a plate glass window—only on the movie set. This physical reaction is done to increase the drama of the scene and impart the illusion of even greater power to the hero’s weapon. In the climax of Walter Hill’s classic Another 48 Hours, bad guy “the Iceman” is shot by Nick Nolte’s 4-inch .44 magnum revolver and flies back through both sides of a glass exotic dancer‘s booth.

A similar complaint comes from Peter F. in Mobile, AL. He’s tired of single pistol shots causing entire cars to blow up. Well, my fellow Hollywood Gun Guys and I were sick of that, too.

So 10 years ago, as an experiment, Red Dawn John Milius and movie armorer Jefferson Navy SEALs Wagner arranged for a few excited souls to shoot a real live operating car that had been rigged to make a 20-yard circle. On private land in northern California, with a safe back stop (don’t try this at home!), about 10 of us shot the running car with every conceivable pistol, shotgun and rifle round from 9mm to .458 Winchester Magnum from 100 yards away. We turned the sheet metal body into automotive Swiss cheese, but the car blithely circled until it ran out of gas.

When you see a bad guy’s car blow up after being shot once by the hero’s 9mm, you can be sure those were +P+loads!

“I, like the friends of mine that are in law enforcement and the military, would like to meet up with one of these TV heroes that shoot sideways, two gunned and with bad aim. I hope that the TV and movie industry keep those people ignorant of how to shoot accurately and efficiently.

“The last thing I want is to have the media teaching the would-be gang bangers and thugs how to do shot placement, speed reloads (let alone counting the rounds they fire), and any other useful tactics correctly. I know that there is no real replacement for good training and there are great schools that teach our officers and other specialty departments how to handle firearms, but do we need the movie correctness like the movie SWAT, to inform the ignorant of what they are doing wrong? As the public gets better at seeing what the movies show for realism and the desire to be correct I think there is a responsibility to the general public to keep some information to ourselves.

“I will have to admit that I see technical items that I know are inaccurate and I would like to see movies done better, but in some areas that can show what to do and how to do it we need to remember who is seeing these movies. Especially the action ones that show a lot of gang violence and make it seem ‘cool’ or ‘in’ to do things of this nature. I only hope that the next time one of my friends or any officer encounters one of the ‘movie shooters’ on the streets he paid great attention to Will Smith (Bad Boys 1 & 2) and not to anyone who showed how it is to be done right.”

Maybe Kevin’s right! While I have spent almost 20 years in Hollywood fighting for more accurate gun handling in movies, maybe I should be working to make gun scenes so unrealistic the bad guys in the real world won’t learn anything useful! After all, I think we’d all prefer if the next bad guy drawing down on innocents from a bell tower had trained himself by watching the Tom Berenger movie Sniper!

With respect to Task Force Ranger and Delta Force converging on the crash sites to protect/rescue the pilots—The two Delta operators Randy Shugart (played by Johnny Strong) and Gary Gordon, (Nikolaj Coster-Waldau) who volunteered to provide security for Michael Durant (Ron Eldard), even though they knew they probably would not make it out alive. And the Delta operators and Rangers staying to cut the dead pilots out of the helicopters before leaving. That act exemplifies one of the stanzas of the Ranger Creed, which  contains “I will never leave a fallen comrade to fall into the hands of  the enemy,” which is reinforced by the warrior Ethos, which states “I will never leave a fallen comrade.”

Major Gould’s right—Ridley’s gripping Blackhawk Down brought a level of realism to the modern war movie to rival the D-Day beach scenes of Saving Private Ryan. 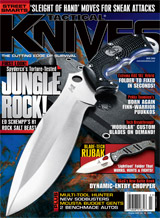 Scopes on backwards. One-hundred-round magazines on .38 Special revolvers. The people most affected by…