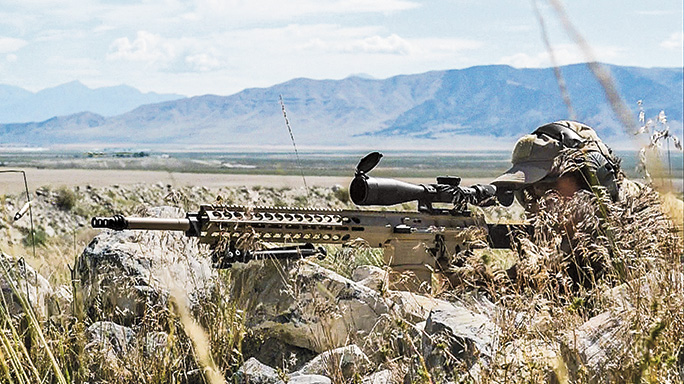 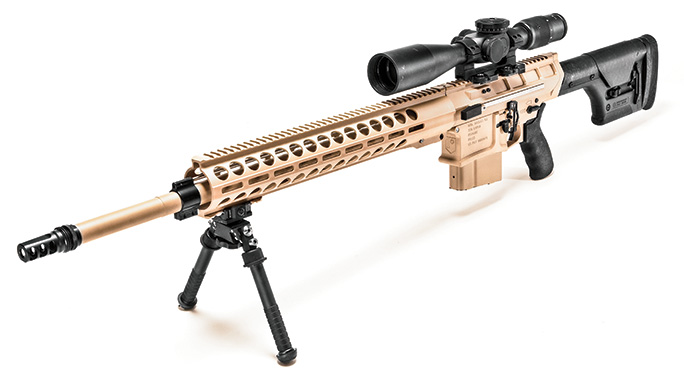 2 of 7
Semi-Auto Sniper: DRD Tactical’s Kivaari
The Kivaari breaks down easily for stow-and-go sniping thanks to an ingenius and consistent quick-change barrel system. Shown with a U.S. Optics 3.2-17X LR-17 scope and an Atlas bipod. 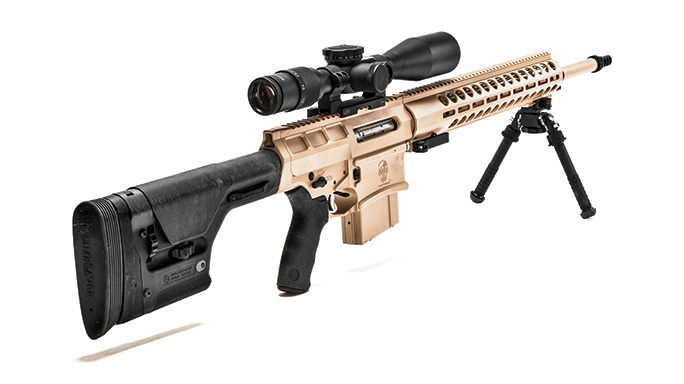 3 of 7
Semi-Auto Sniper: DRD Tactical’s Kivaari
The receivers are CNC-machined from a solid billet of aircraft-grade aluminum, providing the strength necessary to harness the power of the .338 Lapua Magnum. 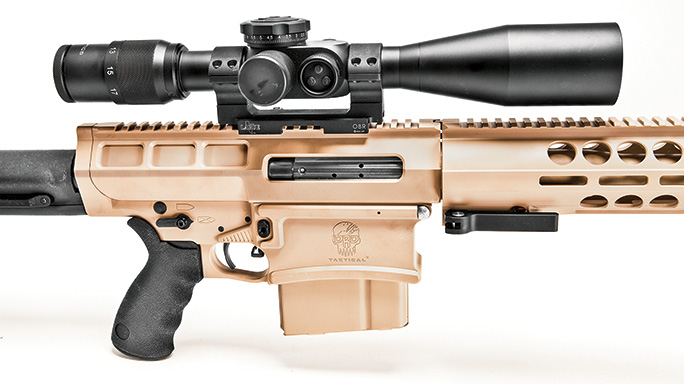 4 of 7
Semi-Auto Sniper: DRD Tactical’s Kivaari
Rotating a large lever just in front of the magazine well allows the handguard to be detached from the upper receiver for quick disassembly in the field. 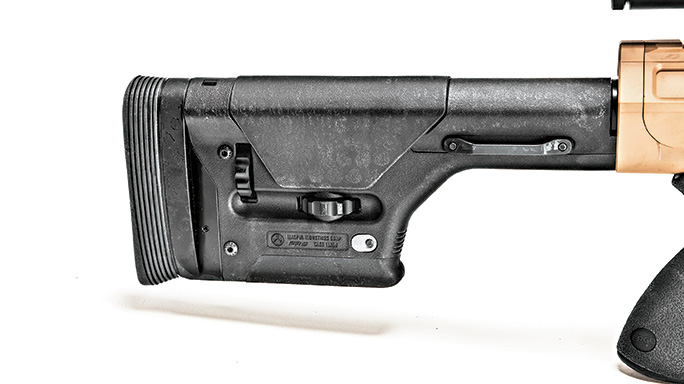 5 of 7
Semi-Auto Sniper: DRD Tactical’s Kivaari
DRD Tactical equips the rifle with a Magpul PRS stock that is finger-adjustable for both length of pull and cheek height. 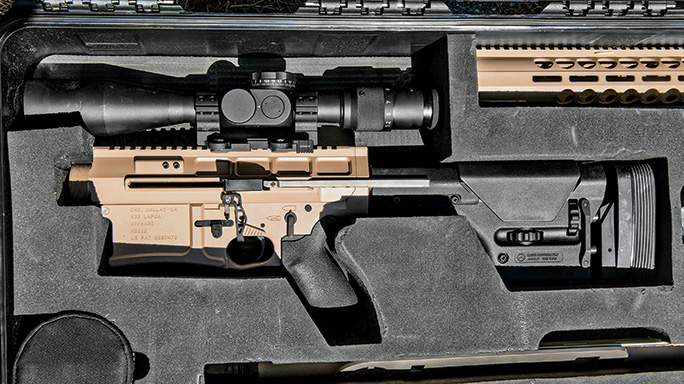 6 of 7
Semi-Auto Sniper: DRD Tactical’s Kivaari
The Kivaari comes in a hard case with a foam insert that is custom-cut to fit the entire system, including a mounted optic and two magazines of ammunition. 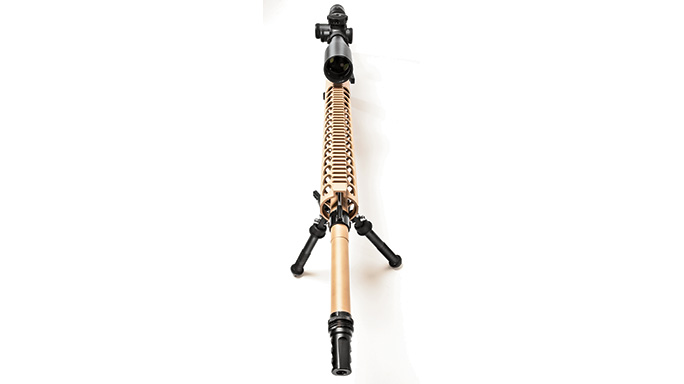 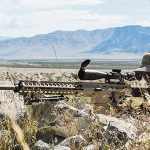 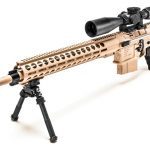 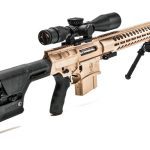 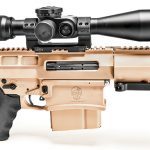 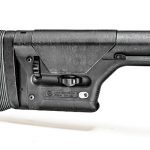 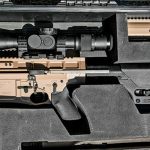 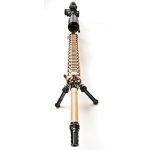 The mission drives the gear, a mantra expressed repeatedly in the firearms world.  It’s basic deployment doctrine for the military and law enforcement. While some have a “one size fits all” approach to firearms and gear, most professionals recognize it just does not exist—at least not yet. This doctrine drives much of what is developed in the way of firearms, especially in the military. Unfortunately, many military professionals are forced to use tools designed for the previous mission. This has been the case for as long as I can remember, and no mission is a better example of this than the military sniper or LE marksman.

My initial training as a police marksman consisted almost exclusively of military doctrine. Much of it was based on the last war, and it consisted of hours of ranging, low crawling and stalking targets while I was dressed like a tree. Sure, it’s all fun stuff, but for a guy deploying across the street, in a place where trees are rare and never move, it was pretty useless. This mentality also drove what rifles were chosen. We typically used heavy rifles with trailer axles for barrels that were 24 to 26 inches long—necessary for those 1,000-yard shots a police officer will never have to take.

The military held this doctrine when it entered Iraq and Afghanistan, where its older sniper tactics were less than valuable. There aren’t a ton of trees in the desert, and much of the fighting occurred across streets. In these situations, operators needed accurate rifles that could deliver rapid fire and reach out to longer ranges if needed. This has led to new semi-auto rifles in larger calibers.

If you want a round that is accurate at long range with manageable recoil, the .338 Lapua Magnum is hard to beat. Many units around the world are moving to this proven NATO round. In fact, many European units have all but abandoned the 7.62mm NATO for their snipers. The .338 Lapua is simply devastating at close range and delivers effective energy out to 1,500 yards and beyond. And, unlike .50-BMG-based rifles, .338 Lapua weapons are only slightly larger and heavier than currently issued 7.62mm NATO rifles. In short, this caliber is accurate, the ammunition is plentiful, and it’s been proven in the field. All we needed was a semi-automatic weapon system.

Semi-auto .338s have been around for a few years, but they’ve been kind of crude. Creating a semi-auto .338 is not as simple as building a 7.62mm AR. Reliability was always an issue with earlier models. But, after Special Mission Unit requests, this is finally changing as manufacturers have answered the call. One of the latest to hit the market is the DRD Tactical Kivaari.

DRD Tactical is a small company with the motto “tool makers for clandestine missions.” I’ve tested a few of DRD’s rifles, and its products certainly uphold that slogan. DRD Tactical’s takedown rifles are popular for a reason. Designed to break down quickly into two units—the barrel/handguard and upper/lower receivers—these rifles fit into some very small packs and cases. Add a folding stock and they are downright compact, fitting into many covert packs and other transport systems. The company’s 7.62mm NATO Paratus Gen 2 gave me excellent results during testing. Assembled in less than a minute, it is well suited to missions where it’d be difficult to run around with a rifle in plain sight. As I recall, the Paratus’ quality was very high with tight machining, attention to detail and custom touches using the highest-quality billet construction. There was no reason to believe the Kivaari in .338 Lapua would be any different—and it wasn’t.

The Kivaari starts with a set of custom-designed upper and lower receivers CNC-machined from a billet of aircraft-grade aluminum. The rifle’s patented quick-change barrel system makes it easy to remove and install the barrel assembly using a supplied wrench. The barrel is 24 inches long with a 1-in-10-inch twist rate and 3/4×24-tpi threading at the muzzle. The rifle comes with SilencerCo’s Harvester Big Bore muzzle brake, which helps tame recoil and accepts SilencerCo’s Harvester Big Bore suppressor.

DRD Tactical’s quick-detach handguard features a long Picatinny top rail, several lightening cuts and Magpul M-LOK attachment slots along the sides and bottom. At 17 inches long, the handguard can accommodate most night vision or laser devices with rail space to spare. It locks into the upper receiver quickly and provides a perfectly aligned continuous top rail for optics.

The direct-impingement gas system includes a gas block, a hardened bolt carrier group and a non-reciprocating, left-side-mounted charging handle. When not in use, the charging handle’s lever folds forward, flush with the receiver, to stay out of the way.

The Kivaari’s lower receiver uses many standard AR parts and includes a flared magazine well as well as an enlarged triggerguard. The AR-style controls are ambidextrous, and the trigger on my test rifle was a very crisp two-stage unit. The magazines are designed for this rifle, and after the last round is fired, the bolt does not lock open. These 10-round magazines are solidly built from metal and can be taken down for cleaning and maintenance. Finally, Magpul’s PRS stock is attached, providing easy adjustments for both length of pull and cheek height. The rifle arrived in a hard case with custom-cut foam to accommodate the entire system, including two magazines.

For testing I equipped my Kivaari with a U.S. Optics 3.2-17X LR-17 scope. The illuminated, first-focal-plane Horus H-59 reticle allows for easy holds in the wind. Adjustments are in mils using the scope’s EREK elevation knob. The EREK gets you out to 1,200 yards or more in less than one turn and sits flat with easy-to-read numbers and tactile adjustments. The only other addition to the rifle was my Atlas bipod. This solid design has proven itself on many magnum rifles.

It is important to recognize that the .338 Lapua Magnum was never designed for semi-automatics. Originally, it was exclusively designed for use in bolt rifles. Unlike smaller-caliber cartridges, this is a critical distinction. Most anything will work in a bolt rifle; with less moving parts, their tolerances are less critical, especially when it comes to brass. While it’s a popular hunting round, many .338 Lapua offerings have proven problematic in semi-automatic rifles. The brass can be soft and out of spec. Overall case lengths can differ, and even match ammunition is not always consistent. One clear exception is the ammo from Lapua, which uses mil-spec brass, primers and bullets. It is the only ammunition authorized for use in this rifle. According to DRD Tactical, Lapua’s .338 ammo is the only ammunition that has proven consistent. You might be OK if you make handloads with Lapua brass, but when it comes to factory ammunition, Lapua is it. Luckily, DRD Tactical kindly sent me 100 rounds of Lapua’s 250-grain Scenar ammo for use in the testing.

This rifle was about as accurate as it gets for a semi-auto in this caliber. With so many moving parts, it’s not easy keeping things consistent. But DRD guarantees that the rifle is 1-MOA accurate with Lapua ammunition, and my results were similar. My best group at 100 yards measured 0.7 inches. The recoil was almost soft in comparison to some .338 Lapua rifles, and the SilencerCo Harvester brake helped keep things steady. Shooting at 300 yards, my best group was 2.81 inches, meeting the stated accuracy standard. Shooting steel at 800 yards, the Kivaari produced a 7.25-inch, five-shot group on a very windy day. One of my 10-shot groups at 500 yards produced a fist-sized glob of lead.

The Kivaari weighs 13.6 pounds unloaded, but it felt much lighter in hand because of how well it’s balanced. And while it is no CQB machine, it handled well when I set up on rocks, using natural terrain, as well as inside a shooting shed at the range. It even worked pretty well using a Hog Saddle on a tripod. No, I wouldn’t call it “handy,” but having humped .308 bolt guns that weigh more, the Kivaari is well suited to long hikes into your area of operation or backcountry hunt.

This is the third semi-auto .338 rifle that I’ve tested right out of the box. I’m not sure what it is, but each one seems to require about 40 break-in rounds before smoothing out. After that, the Kivaari sent 250-grainers downrange as fast as the trigger was pulled. It was a lot of fun pulling the trigger until I realized that it cost about $5 per press! This rifle is so soft shooting and fun to shoot that it could make for a pricey day at the range if you are not careful. After 100 rounds, my shoulder was neither tired nor sore, and the concussive effect was minimal—less than some .308 and 300 Winchester Magnum rifles.

The Kivaari’s ingenious design makes it very easy to break down. You can go from pieces to rifle in about a minute. DRD supplies a wrench that allows you to manipulate the proprietary barrel nut. Unlike the 7.62mm Paratus, you must use the wrench to tighten this nut. Another nice touch is the precision-machined chamber and gas tube protector. Slipping on the barrel extension and over the gas tube, it keeps debris out of the chamber. More critically, it prevents the gas tube from getting bent in transit.

The carry case’s nicely cut foam cradles each piece, providing room for the barrel, receiver, handguard, wrench, two magazines and a bipod. There’s also plenty of room for the suppressor if you have it. The case fit perfectly in my FJ Cruiser and should settle into a trunk pretty easily. DRD Tactical also makes a pack for the Kivaari, and it fit into my Eberlestock G4 Operator bag with ease, allowing for miles of comfortable backcountry carry.

As the company’s first venture into the semi-auto .338 Lapua arena, DRD Tactical has done a great job. The Kivaari’s machining is excellent, with a fit and finish commensurate with a custom rifle’s. The magazines function well and drop free as needed. The rifle’s recoil was minimal, and it was accurate while being very reliable. Semi-auto .338 Lapua rifles are becoming more desirable, especially in the military. This remains one of the new horizons in the precision rifle world, and it looks to be very promising. If you want an excellent example, take a look at the DRD Tactical Kivaari in .338 Lapua. 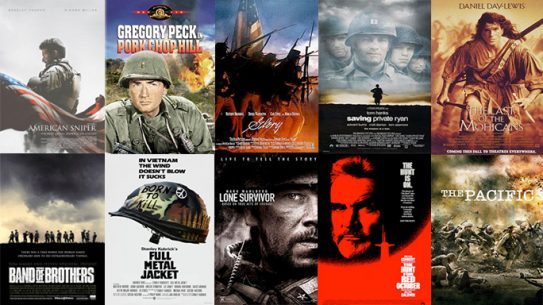 The Top 20 American War Movies of All Time

From forgotten gems to award-winning classics, do your duty and rediscover the top 20...