0
SHARES
0
VIEWS
Share on FacebookShare on Twitter
U.S Marine Corps Lance Cpl. Victoria Rogers jumps over a canal on her way to a school in Garmsir district, Helmand province, Afghanistan, April 30, 2011. Rogers, with the 1st Battalion, 3rd Marine Regiment Female Engagement Team, visited medical clinics and schools on a regular basis as part of the team’s efforts to interact with women in the community. (U.S. Marine Corps photo by Cpl. Colby Brown/Released)

Command Sergeant Major Jane Baldwin and Colonel Ellen Haring, both Army reservists, said policies barring them from assignments “solely on the basis of sex” violated their right to equal protection under the Fifth Amendment of the Constitution.

“This limitation on plaintiffs’ careers restricts their current and future earnings, their potential for promotion and advancement, and their future retirement benefits,” the women said in the suit filed in U.S. District Court. 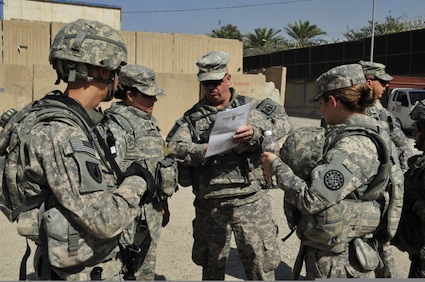 The Pentagon unveiled a new policy in February that opened up 14,000 more positions to women in the military. It still barred them from serving in infantry, armor and special-operations units whose main job is front-line combat. Women make up about 14.5 percent of active-duty military personnel. More than 800 women have been wounded and more than 130 killed in fighting in Iraq and Afghanistan, the lawsuit said.