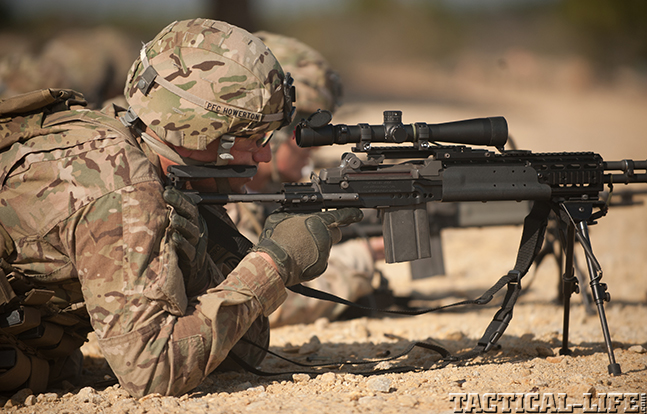 Development of the M14 rifle began after World War II with great expectations. It was hoped that it would replace the four primary infantry small arms in use at the time—the M1 rifle (Garand), the M1 carbine, the M3 submachine gun and the Browning Automatic Rifle (BAR). During WWII, the M1 rifle had established a reputation for ruggedness and reliability, and had given U.S. infantrymen a distinct advantage over Germans and Japanese soldiers armed with bolt-action rifles. However, developments such as that of the German StG 44 (Stermgewehr 44), the forerunner of todays assault rifles, were indications that the M1’s battlefield supremacy would not last. Germany had produced over 425,000 StG 44s, which had mostly been sent to the Russian front to help counter the numerical superiority of the Russians. The effectiveness of the StG 44 was certainly not lost on the Russians, who were influenced by it to some extent in the development of the AK-47, though the SKS would be widely issued before the AK-47 entered full service.

An important factor in the development of the StG 44, the SKS and the AK-47 was the use of an intermediate cartridge that was less powerful than those typically used in infantry rifles of WWII but more powerful than those used in pistol-caliber submachine guns. The U.S. .30-06 round certainly offered long-range killing power, but its typical overall length of 3.34 inches affected the design of the M1 rifle. By comparison, the overall length of the 7.62x39mm round used in the AK-47 and SKS was only 2.2 inches. A shorter cartridge allowed greater versatility in development of the rifle to use it. The round developed for use in the next U.S. military rifle was the 7.62x51mm, which had an overall length of 2.75 inches, about midway between the .30-06 and 7.62x39mm round. This would become the standard round for NATO from the 1950s to the 1970s.

There had been other complaints about the M1 rifle during the war. Perhaps the one heard most often dealt with magazine capacity. The M1 used a fixed magazine that took an en bloc eight-round clip. It was difficult to top off the clip if rounds had been fired, and when the last round was fired, the clip was ejected from the rifle with a distinctive sound. As a result, the Ordnance Department and some unit armorers experimented with altering M1 rifles to take detachable magazines, normally 20-round BAR models. Another criticism of the M1 was that it would only allow semi-auto fire. Given the eight-round magazine capacity, however, full-auto fire would have emptied the rifle quickly. Experiments showed, too, that controlling a Garand converted to full-auto was quite difficult. Even controlling the BAR, which weighed about twice what the M1 rifle did, took some effort—one reason, along with having to carry the weapon and spare magazines, that BAR men tended to be larger and stronger than most other infantrymen.

Experimentation on a select-fire battle rifle with a detachable magazine progressed during the late 1940s and early 1950s, though the M1 rifle remained in service through the Korean War. Early development of a new battle rifle (note that this term normally refers to an assault-type rifle firing a full-power cartridge) continued, as did development of the 7.62x51mm round, the ballistics of which were close to those of the .30-06 despite the shorter cartridge.

The tale of the M14’s development could fill a book and has, but suffice it to say that there were technical and political hurdles to overcome. Various competitive tests during the early 1950s narrowed the field for the new infantry rifle to the T44, which would become the M14, and the T48, the FN FAL as submitted for U.S. testing. Among the political intrigue involving the selection of the M14 reportedly was a deal cut with NATO allies, many of which had selected the FAL, that if they adopted the 7.62x51mm cartridge, the U.S. would adopt the T48. NATO did adopt the 7.62x51mm round, but the U.S. did not adopt the T48. Instead, the T44 was formally adopted in 1957 as the “United States Rifle, 7.62mm, M14.”

Contracts to produce the M14 were awarded to Springfield Armory, Winchester and Harrington & Richardson, then later, Thompson-Ramo-Wooldridge, Inc. (TRW). Production began in 1959 and ended in 1964, with a total of 1,376,031 M14s having been built. The question that logically arises, then, is why was the rifle only produced for five years.

Once again, a book could be written on the events resulting in the replacement of the M14. To summarize succinctly, the Vietnam War came along, as did advocates in the military establishment for the ArmaLite AR-15. Additionally, the M14 did not meet all expectations. Combat in Vietnam was at closer range and against a smaller enemy. Airmobile delivery of troops also made a more compact and lighter rifle more desirable. Another issue was the difficulty in controlling the M14 on full-auto fire. It was so difficult that most M14 rifles were permanently set on semi-auto, with only those intended to replace the BAR capable of full-auto fire. The AR-15, on the other hand, was chambered for the 5.56x45mm round and was much more controllable on full-auto fire. Substantially more loaded magazines for the AR-15 could be carried as well. The U.S. Air Force, especially, found that the AR-15 fit their needs and retained the M1 carbine until sufficient AR-15s were available rather than adopting the M14. As a side note, today the USAF does retain a few thousand M14s for use by special tactics squadrons and for some ceremonial duties.

By 1967, the M16, as the AR-15 was designated once adopted, had replaced the M14 in most units in Vietnam, though some transport, aviation and other units retained the M14 longer. Troops assigned to NATO in Europe retained the M14 until 1970. This allowed uniformity of ammunition with other NATO forces and let production of the M16 go to Vietnam. There were troops in both Vietnam and Europe who preferred the M14 to the M16, but once early problems with the M16 had been corrected, troops overwhelmingly preferred it.

During the M14’s service in Vietnam, there had been a demand for a more effective squad automatic weapon, which resulted in the development of the M14A1. This weapon had a strengthened stock, bipod, pistol grip and vertical forend among other special features. When the M16 was adopted, the M60 machine gun generally functioned in the role of a squad automatic weapon, though it was not really designed for the task.

“As this is written, the M14 has been in U.S. military service for over a half-century and seems likely to fill the designated marksman role for a few more years.”

Even after it was replaced by the M16, the M14 proved well suited for another mission in Vietnam. During the Vietnam War, the USMC used the M40 bolt-action sniping rifle after 1966, but the U.S. Army was still primarily using the M1D version of the Garand. To meet Army needs, a sniping rifle based on the M14 was developed as the XM21 (later as simply the M21) sniper weapon system (SWS). In 1969, Rock Island Arsenal converted 1,435 National Match-grade M14s to sniping rifles by adding the Leatherwood 3-9x Adjustable Ranging Telescope (ART). Preset for the 7.62mm NATO Match round, the ART automatically adjusted bullet drop to the range based on ranging brackets in the scope’s reticle. Snipers issued the M21 were also issued match-grade ammunition.

Although the U.S. Army adopted the M24 SWS in 1988, the M21 continued to see some use through Operation Desert Storm and a little later. However, the M21 concept has had a new life during the War on Terror, as the need for a rifle to perform a mission between the sniping rifle and the M4 Carbine has resulted in various permutations of the designated marksman rifle (DMR). In some cases, units acquired M14 rifles from armories and just added a scope to give some unit members the ability to engage targets at longer ranges. However, other units have upgraded the M14 substantially to fit its new mission. The U.S. Navy SEALs have been using the MK14 Enhanced Battle Rifle (EBR) for the last decade. Variations have been adopted by other branches. Without going into detail on all the configurations of these types of rifles, a few general comments can be made. They have a telescoping chassis stock system with a pistol grip and Picatinny rails. Some are fitted with suppressors. Scopes vary, but the most common are the Leupold 3.5-10x Mark 4 or one of Nightforce’s NXS models.

Although the M14’s primary combat mission for the last decade has been as a designated marksman rifle, some are still in use for other purposes. Navy ships use M14s as line-throwing guns, and some EOD units use them to explode ordnance at a distance. They have retained a ceremonial use as well with units such as the guards at the Tomb of the Unknowns in Arlington National Cemetery.

A substantial portion of the M14s produced have either been destroyed or sent elsewhere as foreign military aid. A few years ago, an estimated 30,000 or so were still in use with the various branches of the service, the largest number as DMRs. Around 87,500 remained in storage. It would seem likely that the use of the M14 for DMRs and for other duties will continue for some years, though the SCAR-H has seen some use among special operations units.

Because it was a select-fire weapon, the M14 has not been sold on the civilian market. However, the M1A-type semi-auto version has proven very popular with shooters. For someone wanting an M1A as close to an original M14 as possible, I would recommend finding an early Springfield Armory (Geneseo) M1A, as most of the parts other than receiver were surplus M14 parts sold off after production of the rifle ceased.

As this is written, the M14 has been in U.S. military service for over a half-century and seems likely to fill the designated marksman role for a few more years. Ironically, the features that made it a sound design for fighting across the expanses of Europe during WW II have made it useful for fighting across the mountainous valleys of Afghanistan. 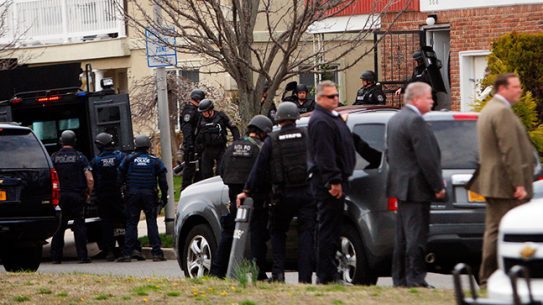