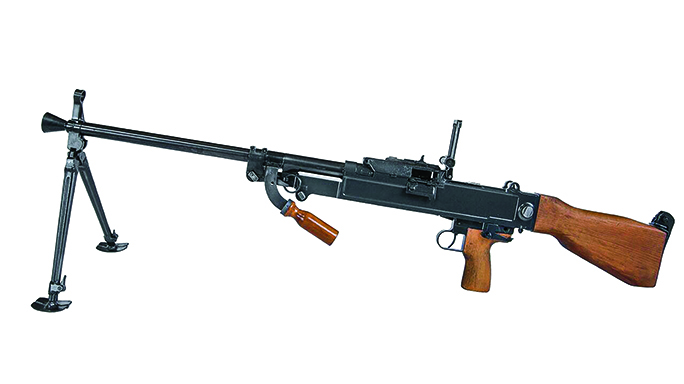 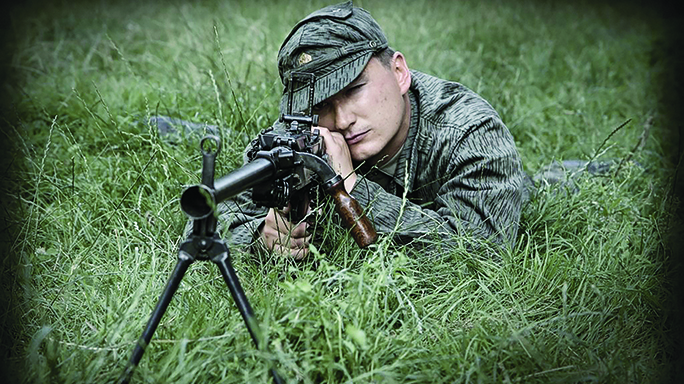 2 of 7
UK vz. 59
The carry handle on the UK vz. 59 can be used to help carry the gun, change out a hot barrel or, locked on the right or left side, used as a brace for off-hand firing. 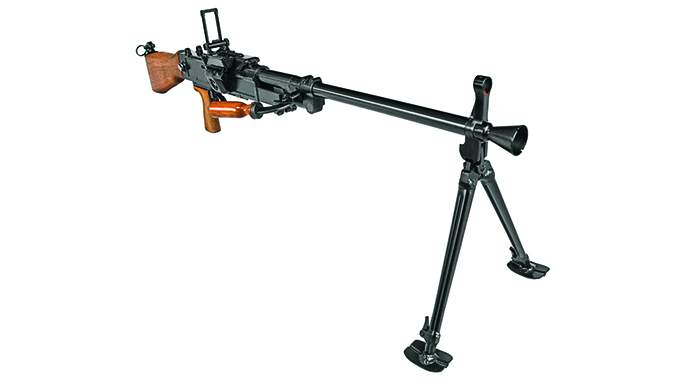 3 of 7
UK vz. 59
The pistol grip is designed to work as a charging handle. After pressing a lever on the left side, the pistol grip unlocks. Pushing it forward and then to the rear locks the bolt into battery, allowing the gunner to keep his eyes forward, on the target, while reloading. 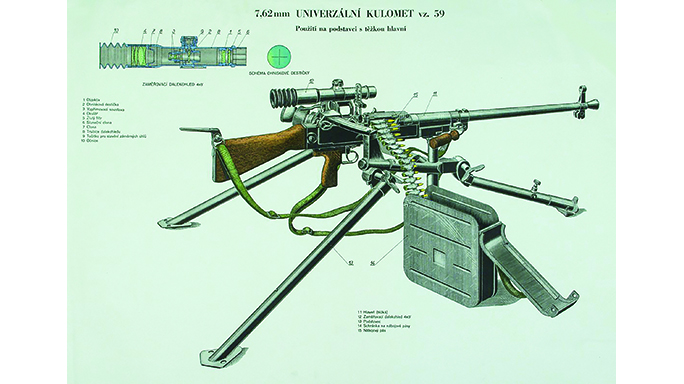 4 of 7
UK vz. 59
The UK vz. 59 was designed to be fired from a bipod or, as shown, a tripod with a push-through belt to feed the rimmed 7.62x54R cartridges. Though iron sights were installed, scopes could also be mounted on top of the receiver. 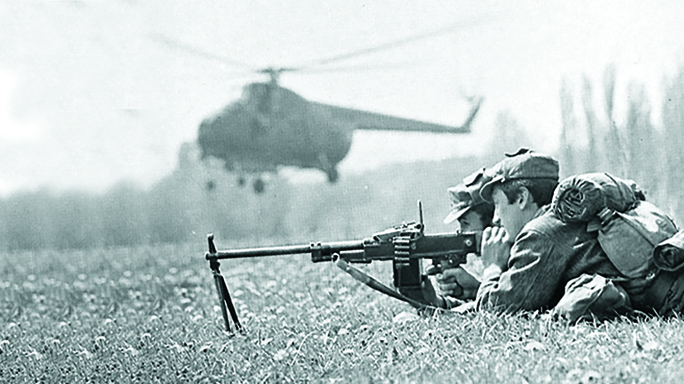 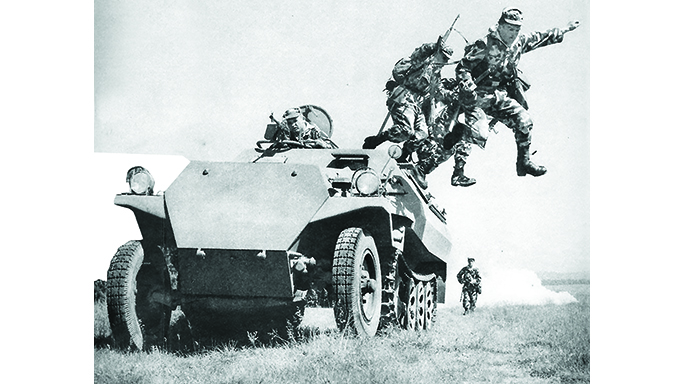 6 of 7
UK vz. 59
Czech soldiers deploy from an OT-810 half-tracked armored troop carrier that was designed in the 1950s. 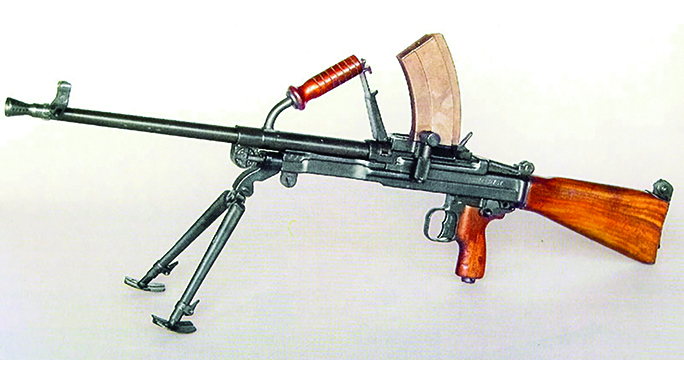 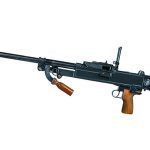 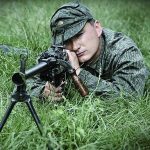 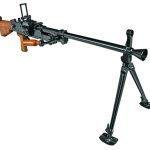 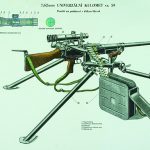 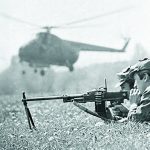 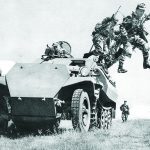 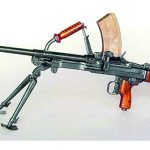 The Czech people of Central Europe have a long history of doing things “their way.” In the 15th century, the region of Bohemia (Čechy in the Czech language) embraced the Protestant Reformation and rebelled against the Holy Roman Empire. Bohemian Hussite infantry, under the able leadership of their one-eyed general, Jan Žižka, repeatedly defeated the mounted cavalry of Catholic Austria, Hungary and Germany and laid the foundations of modern Czech nationalism.

The Kingdom of Bohemia remained independent until the 1520s, when it came under the control of the Hapsburgs. For the next four centuries, the Czechs were ruled from Vienna but steadfastly retained their language, culture, religion and a strong sense of nationalism. Considered the most “Westernized” of the Slavic peoples, the Czechs and Slovaks formed one of the best educated, most forward-looking and nationalistic minorities within the multiethnic Austro-Hungarian empire of the Hapsburgs.

With the outbreak of World War I, latent anti-Hapsburg feelings intensified to the point where entire Czech and Slovak units deserted and surrendered to the Russians. Many enlisted in the Allied-sponsored Czechoslovak Legion and fought against the Central Powers on the Eastern Front.

During the chaos of the Russian Revolution and Civil War, the Czech Legion fought its way eastward almost 5,000 miles along the Trans-Siberian Railway to Vladivostok, where it was transported by the Allies back to Europe to the newly independent country of Czechoslovakia.

Bohemia had been a center of weapons production since the Middle Ages, and after WWI, Czechoslovakia became a major player in the international arms trade. The firms of Ceská Zbrojovka (CZ) and Zbrojovká Brno (ZB) supplied rifles, pistols and machine guns to armies and police forces around the world.

While the rifles they produced were little more than copies of the proven Mauser 98, their semi-auto pistols and machine guns were unique designs by Czech and German engineers such as Václav Holek, Theodor Langhart, K. Krippner, Vaclav Pavliček and František Myška.

The two most notable pre-World War II machine guns were both produced by ZB: the vzor 26 and vzor 37. The former was a light machine gun (lehký kulomet) designed by Václav Holek, while the latter was a heavy machine gun (těžký kulomet) designed by Holek in cooperation with Miroslav Rolčík. While both were gas-operated, air-cooled weapons, the vz. 26 was fed from a box magazine and fired from a bipod while the vz. 37 was belt fed and mounted on a tripod.

Both were adopted by Czechoslovakia and sold to dozens of armies. Copies of the vz. 26 were produced in Spain, Romania, Yugoslavia, China and Japan while the famous British Bren was a modification of it. The vz. 37 was adopted by Romania, Yugoslavia, Afghanistan, Iran, Argentina and China while Great Britain produced a licensed copy, the Besa, as a tank machine gun.

When Czechoslovakia was taken over by Nazi Germany, ZB continued production of the vz. 27 and vz. 37 for the Wehrmacht until the country was liberated in 1945. After the war, Czechoslovakia enjoyed a short period of democracy, until a 1948 Communist coup installed a pro-Soviet government in Prague that quickly aligned itself with the USSR.

The post-war Czechoslovakian army had been armed with a mixture of Czech, ex-Wehrmacht and Russian machine guns, including the vz. 26 and vz. 37, the German MG 34 and MG 42, and the Soviet DP, DPM and RP-46. Despite pressure to standardize on Soviet-pattern small arms, the Czechs insisted upon going their own way, and instead of adopting the SKS carbine and its 7.62x39mm cartridge, they opted for a semi-auto carbine of native design, the “7.62mm Samonabiject Pušca vzor 52,” which was chambered for a proprietary cartridge, the “7.62mm náboj vzor 52,” or 7.62x45mm.

To equip the country’s troops with a squad automatic weapon, the “7.62mm Lehký kulomet vzor 52” was adopted. Designed by the irrepressible Václav Holek, it was based upon the vz. 26 and was a gas-operated, bipod-mounted gun that was unique in that it could be fed from either a top-mounted, 25-round box magazine or a 100-round belt. Like its companion carbine, it was chambered for the 7.62x45mm.

With the lessons of World War II in mind, most armies were in the process of developing a general-purpose machine gun that was capable of serving as either a bipod-mounted squad automatic weapon or a tripod-mounted medium machine gun with extended fire capability. Examples include the American M60, the German MG3 (an updated MG42), the FN MAG and the Soviet PKM, all of which were belt fed and chambered for full-power rifle cartridges at the time.

While the Czechs had obtained some PKMs from their erstwhile Soviet allies, as was their usual practice, they wanted a weapon of native design. The resulting weapon was the “Univerzální kulomet vzor 59” (Universal Machine Gun Model 59, or UK vz. 59) designed at the ZB-associated Zbrojovka Vsetín government facility. By 1964, it had replaced all vz. 52-57 weapons in frontline service.

The UK vz. 59 was an air-cooled, belt-fed weapon and, with typical Czech thoroughness, was manufactured from all machined steel parts with a wooden buttstock and pistol grip. It was available with a quick-change lightweight barrel or a heavy barrel for sustained fire, and it could be fired from either a bipod, a tripod or a coaxial mount on vehicles and tanks.

A handle mounted on the barrel could be used to carry the gun, remove a hot barrel, and locked in different positions on the left and right side of the gun, for bracing during fire, or in position for the front hand when held in an assault mode. It was fed from 50-round, non-disintegrating metal link belts that were held in a box attached to the right side of the receiver. These belts could be joined together to provide extended firepower capabilities.

The UK vz. 59’s gas operating system is based in large part upon that of the earlier ZB vz. 37, and the gun fires from an open bolt (which helps cool the barrel between bursts). With a belt of cartridges in the feedway and the bolt cocked, pulling the trigger releases the sear, allowing a recoil spring in the buttstock to force the the slide/piston assembly with the bolt forward, stripping a cartridge out of the belt and chambering it as it cams the bolt down to the locked position. As the bolt goes into battery, the striker is released, firing the cartridge.

As the bullet travels down the barrel, powder gases are vented through a port on the bottom of barrel and into a tube where they impinge upon the piston head, driving the piston/slide assembly to the rear, where it cams the bolt up and out of the locked position and pushes it to the rear. As the bolt moves, it extracts the spent cartridge case, which is ejected out of an opening in the bottom of the receiver. The gun will continue firing as long as the trigger is held to the rear, or it runs of out ammo.

Despite their oft-stated adherence to socialism and communism, the Czechs are well known for their entrepreneurial spirit, and all of the 7.62mm weapons mentioned here were released for sale on the world market, while others, at the insistence of the USSR, were eventually provided to “national liberation” groups around the world.

Thus, it wasn’t long before the UK vz. 59 was seen in, shall we say, “less peaceful” regions of the planet where it was used by the North Vietnamese/Viet Cong in Southeast Asia, various Middle Eastern armies and several sub-Saharan countries in Africa. To make it attractive to customers who did not use Soviet-pattern weapons, 1968 saw the introduction of the UK vz. 59N, which was chambered for the 7.62mm NATO cartridge.

With the collapse of the USSR and the Warsaw Pact, Czechoslovakia retained the UK vz. 59 as its standard general-purpose machine gun. A 1992 agreement saw the country peacefully divide itself into two independent nations: the Czech Republic and Slovakia. Both countries became members of NATO and have supplied troops to serve in Afghanistan. The Armáda České republiky (Army of the Czech Republic) replaced the UK vz. 59 with the UK vz. 59N so as to have commonality of ammunition with other NATO member armies.

The UK vz. 59/59N is still in service with both the Czech and Slovak armies, although the former have recently taken the FN Mk 48 machine gun into service, which is expected to replace all the UK vz. 59-type weapons in service. 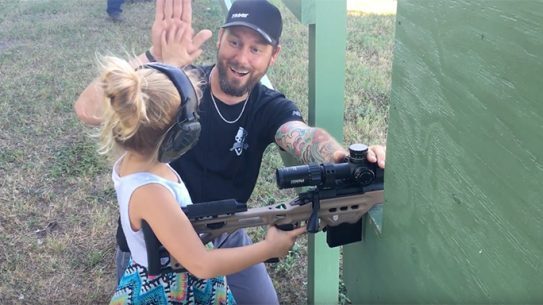