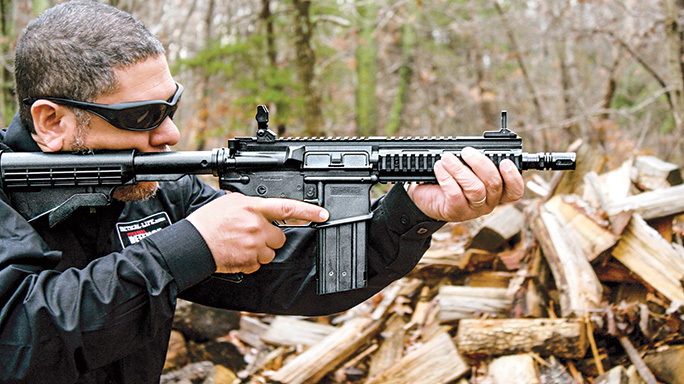 1 of 2
Extreme Air: Umarex’s Steel Force AR-Style Airgun
The Umarex Steel Force BB gun mimics many of the operations of a standard AR, so it’s useful for training or just having a blast. 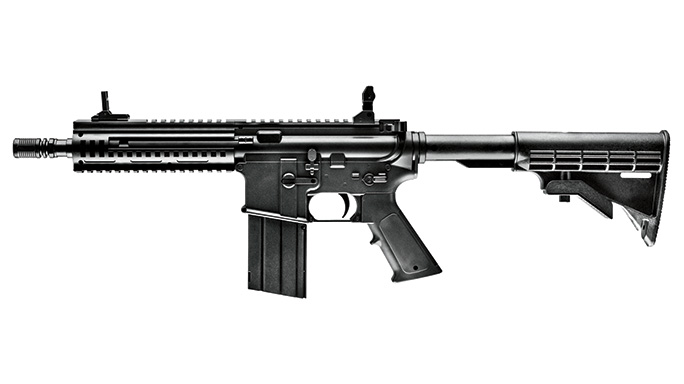 2 of 2
Extreme Air: Umarex’s Steel Force AR-Style Airgun
The Steel Force comes with a collapsible stock, a 300-round reservoir and a six-shot burst mode. To see a video of the gun in action at the range, check out tactical-life.com. 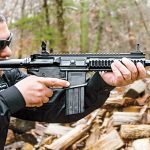 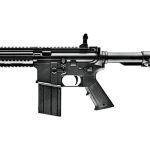 Airguns have a great deal of utility and can be used in places where firearms cannot. This has a significant training advantage for the average shooter. For those who like to train with AR-platform rifles, Umarex USA has a new airgun that really fits the bill. The Umarex Steel Force  is a clone of a typical short-barreled AR-platform rifle that operates with the use of two standard CO2 cartridges and fires steel, .177-caliber BBs from a built-in 300-round reservoir.

But shooting a BB gun was always supposed to be about fun as much as utility, and the Umarex Steel Force doesn’t lack in this regard, either. It has a semi-automatic capability, and with a short flick of the standard AR selector, it will fire six-round bursts as well. Unfortunately, users will have to make do with six-round bursts as true full-auto would release too much CO2 and freeze up the works.

In semi-automatic mode, you get the most power for each shot, and the BBs exit the short 7.5-inch barrel at 430 fps. Firing in burst mode results in somewhat slower velocities. It should also be noted that firing quickly even in semi-automatic mode will result in slower velocities. One of the ironies of firing a CO2 gun is that instead of heating up, it cools down, which affects operation, so for maximum accuracy and velocity it is best to slow down. You will also notice a quick drop off in velocity after about 300 shots, indicating the need for new CO2 cartridges. In keeping with the rifle’s style, the barrel is capped with a mock A2-style flash suppressor.

One of the most interesting features to me was the similarity the Steel Force has to an actual AR. The flattop “upper receiver” has a continuous Picatinny top rail, offering approximately 8.5 inches of space for scopes and sights. Permanently affixed, non-adjustable, polymer folding backup sights are included as well. There are additional Picatinny rail sections on the right side and bottom of the handguard, with each offering 6 inches of space for mounting lights, lasers or a vertical foregrip as desired. There are no rails on the left side of the handguard, as this is where the magazine and charger are located. This is the only area that outwardly differs from an AR.

The removable magazine looks like a standard, if a bit long, 20-round AR magazine, but it instead houses the twin CO2 cartridges and should not be routinely removed unless replacing the CO2. It is partially removed using a standard AR magazine release on the right side of the rifle, but the user must also depress a metal tab on the magazine body to completely remove it. Once it is out of the rifle, the user can remove the cover plate to insert the CO2 cartridges. An included key fits neatly inside the “magazine” and allows the cartridges to be properly seated, pierced and also removed.

The right side of the rifle features a non-functional dust cover and forward assist. On the left side of the receiver is a mock bolt release and a standard three-position AR safety selector with safe, semi-auto and burst modes. At the rear is a six-position-collapsible stock adjustable for transportation and length of pull. This makes the Steel Force ideal as a trainer for kids and smaller-statured shooters. On top there is a functional charging handle that retracts about 2 inches and is needed to bring the rifle into battery for the first shot. This also adds to the rifle’s training realism.

To fill the BB reservoir, retract the front sight about 1 inch to access the opening. Be careful not to overfill the reservoir, and Umarex specifies that only high-quality steel BBs should be used. The rifle cannot be fully disassembled, and maintenance consists simply of a drop of lubricant at the top of each CO2 cartridge when it is inserted. If a BB gets stuck in the barrel, possibly due to an undercharged CO2 cartridge, it is necessary to remove the CO2, place the rifle on safe and use a .17-caliber rod to clear the chamber.

While the Steel Force has a 300-round reservoir, it only has a 30-round magazine. This tubular magazine sits underneath the reservoir and is fed by a follower located on the left side of the rifle, along the handguard. To load it, push the follower forward and shake the rifle until the magazine is full, then release the follower. The training advantage here is that you are truly limited to a 30-round magazine like on an actual AR. This forces the shooter to exercise fire control discipline, especially in burst mode.

Despite its name, I could not find much steel at all in the rifle’s construction with the exception of a few screws. This makes for a very lightweight rifle at less than 3.5 pounds. Its very compact length, under 30 inches with the stock extended, makes it very handy on the range. It is nice not having to wear hearing protection for a change, but eye protection is required, as the BBs have a strong tendency to ricochet. This means hard targets should be avoided.

Setting up some soda cans on the rage proved to offer a high level of fun. Cans bounced around aggressively when hit with a burst of steel BB, most of which had enough force to pierce both sides of the cans. The six-round burst mode also allows the user to fire shorter bursts if desired, which makes it much easier to conserve ammunition.

The Steel Force’s accuracy was good using the iron sights, but it shot a bit low at 30 feet. I mounted a Bushnell TRS-25 HiRise red-dot sight, which fit perfectly and features a 3-MOA dot. Its 11 brightness settings makes the dot visible in all lighting conditions and helped wring out the rifle’s full accuracy potential.

The Steel Force makes it easy to set up a shooting course in a wooded area or backyard. I set up cans along a trail and practiced jogging along, using cover and engaging targets quickly. For an added challenge you can have a friend set up the targets, with some hidden behind cover, etc. Take care to be aware of your surroundings and make sure you have a safe backstop for the BBs. This is the type of training that can be very challenging to pull off with an actual AR, but with the Umarex Steel Force, tactical training can take place almost anywhere.

The trigger is rather mushy, but this is not a precision target or hunting gun. The high-quality Steel Force is constructed of mostly polymer with some metal alloy, but it feels very sturdy and well made. Umarex is a German company with a good deal of experience manufacturing high-powered air rifles and licensed versions of popular tactical rifles and handguns, including those from Heckler & Koch and Colt.

Anyone looking to expand their tactical training opportunities, introduce new shooters to basic safety and marksmanship, or just enjoy the feel of popping cans with an easy-to-get full-auto BB gun now has the perfect tool with the Umarex Steel Force. 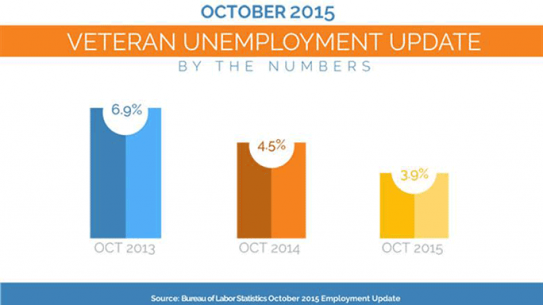