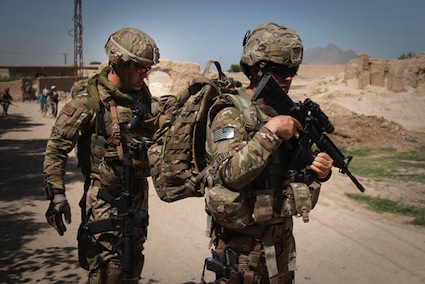 A team of kinesiology researchers led by Richard Van Emmerik at the University of Massachusetts Amherst recently received a 2.5-year, $975,000 grant through the Navy Health Research Center in the Department of Defense to study how the average 100-lb. equipment load carried by soldiers, which can be even heavier in some missions, affects their survivability, likelihood of injury and ability to carry out missions.

“Load is not a new issue for field commanders to consider,” says Van Emmerik, who is director of UMass Amherst’s Sensory-Motor Control Laboratory. “But while past studies typically focused on how load affects gait and the lower body, we will for the first time look at how the upper body, trunk and head coordinate in a soldier who is burdened by a heavy load, which is a fundamentally different and a more complex situation.”

Doctoral candidate Christopher Palmer, an Army employee who is an expert in motor control and military performance and a key member of Van Emmerik’s team, adds, “To us, gait is just the beginning. We’ll introduce a visual search task and track the coordination of upper body, postural control and visual acuity. No study has yet added all these, plus other factors, together in a realistic way to look at how load affects the soldier’s ability to perceive threats, his or her operational effectiveness and survivability in combat.”

Findings will also have practical significance for firefighters, police, rescue workers and others who must wear helmets, body armor, backpacks or other equipment while carrying out their duties.

The kinesiology research team, which includes doctoral students Mike Busa and Luis Rosado, with post-doctoral fellows Darnell Simon and Jongil Lim, will recruit highly trained infantrymen as laboratory subjects who will be tested with no load as well as while carrying a variety of loads between 70 and 120 lbs. for the studies.

Van Emmerik notes, “Biomechanics has taught us a lot over the past 30 years about load and locomotion, stamina, oxygen use, energy use and so on. We’ll expand to look at whether load affects reaction time, visual attention to critical details and the ability to discriminate friend or foe. We’ll set up some fairly realistic tasks such as having a soldier jump off the back of a truck, scan an area, and then immediately hit targets in a marksmanship test.”

In preliminary tests, Palmer says, they have used participants who are “fresh” and not fatigued. But as work progresses, they plan to also conduct tests with women and with subjects who are tired to see if they have trouble recognizing friend or foe on a radio call or taking a marksmanship test wearing night vision goggles, for example. “We’ll add different layers of stress in a smart progression so that we can understand what each layer is adding to the challenge.”

Overall, the kinesiology research team would like to be able to report to the military a great deal of new knowledge about the physical and mental trade-offs and limitations that come with soldiers carrying heavy loads, and of which a field commander can be aware.

“We’d like to contribute to commanders being able to make better decisions about what can be accomplished under certain conditions,” Van Emmerik says. “For example, if the protective equipment has to be x, y and z, where can you expect the sharp drop in performance and how can you balance that with mission success?” 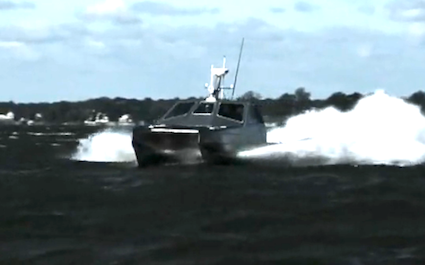