0
SHARES
0
VIEWS
Share on FacebookShare on Twitter
Editor’s Note: TW would like to hear from you! Email your submission and photo to Tactical-Life@harris-pub.com. We pay $100 for any featured story! 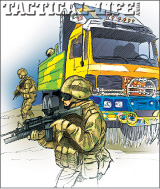 Few vehicles are more ubiquitous in Afghanistan than the often maligned “jingle truck.” Think of a large Ryder moving truck, open-backed, with lots of bling dangling from the sides and bumpers and a really gaudy paint job. These trucks cover the countryside and represent the majority of the nation’s transport capability.

Late one fall evening, ODA 372 had intel confirming a meeting between two high level Taliban leaders. The meeting was in a remote area where all routes to the target could be easily observed by enemy sentries. Helicopter insertion wasn’t an option because the noise generated from infil would cause those attending to scatter before the ODA could get on target. The entire ODA decided to hide in the back of one dilapidated jingle truck for the seven-hour ride to the target.

Once near the target, the team slipped out of the back of the truck in the pre-dawn darkness. A local contact agreed to lead them to the compound where the meeting was in session. The team’s interpreter scanned through the handheld radio’s frequencies until he found the one the guards were using.

While monitoring the guard’s chatter, the team worked its way within 25 meters of the compound’s front door. The local contact could contain himself no longer and jumped out of the riverbed to scream at one of the guards, triggering a firefight. ODA 372 moved under fire to surround the compound and began clearing it. After a lot of small arms fire and a few grenades, the team secured the compound and killed one of the leaders, the other escaped. Several guards were also killed in the process.