These days, everyone is feeling the effects of the current economic slowdown. Our government officials in Washington have told us that the recession is officially over, but you certainly wouldn’t know that in my little part of the world.

In the not-so-distant past, the thought of laying off police officers was pretty much unheard of.

Over my career, my outfit rode the economic rollercoaster and endured some lean times when we couldn’t hire or promote, or purchase as many new vehicles as we would have liked, but we were soon back on track. That is not the case today, and stripped down budgets continue to have a very negative effect on law enforcement agencies.

Taking The Hits
On the local front, law enforcement funding has taken a heavy hit. Predictably, the first casualty is training. Unlike salaries, health benefits, gasoline, and equipment, training is an intangible and only becomes an issue when something goes terribly wrong. In order to function within budget constraints, the powers-that-be cut training and keep their fingers crossed that nothing happens until things improve. Unfortunately, it doesn’t work that way, and limited training opportunities continue to put officers at risk.

Large-scale layoffs of police officers in my home state of New Jersey have not occurred since the mid-1970s, but are now part of our sad reality. In Camden, one of the most violent cities in America, almost half of its officers were given pink slips because there was no money available to pay them. Other cities have endured similar cuts and lost experienced officers as a result.

Ironically, it tends to be the cities with the bigger crime problem that have taken the most hits.

It should hardly be a surprise that having fewer police officers in many of these locales has resulted in more crime. In fact, some individuals recognized the law enforcement cut-backs as an opportunity. In Newark, gang members sported hats and T-shirts with the date of impending police layoffs.

With fewer officers beating the bricks, the deterrent factor to would-be offenders is diminished. Response time to emergencies is greater than before. Vital equipment cannot be replaced and special units have been disbanded as departments are only able to provide the most essential services. This puts both citizens and officers at greater risk.

Some Hope
Fortunately, there is a ray of hope. Recently, the Department of Justice awarded 5.7 million dollars to 17 New Jersey police departments for the purchase of high-tech crime fighting equipment. This technology includes closed-circuit cameras, gunshot detection systems, license plate readers, and mobile data centers. Larger cities such as Newark, Camden, Trenton, Jersey City, Paterson, and Elizabeth will be awarded $500,000 each, while smaller cities will receive $250,000. Funds can be used to hire staff to monitor the cameras, but not to re-hire officers laid off due to budget cuts.

While there is no viable substitute for police officers working the street, this technology can make a difference. It has already been used in New Jersey to obtain a conviction of an individual who claimed he shot another in self-defense. The video told a very different story and justice was served. In another case, license plate readers were used to track individuals involved in a homicide.

In addition to equipment, other federal grants are available to fund positions. A number of New Jersey communities are seeking COPS (Community Oriented Policing Service) grants in order to hire new officers. Applicants tend to be smaller, suburban communities looking to hire a small number of officers beyond what their tight budgets will support. Currently, 157 communities are seeking 150.6 million dollars to hire and retain police officers. This trend is hardly specific to New Jersey—states such as California, Florida, and Texas have applied for even larger grants.

This situation is hardly ideal, but can help put the brakes on further backsliding until the economy improves. That may be a while. For further information on COPS grants, visit cops.usdoj.gov. 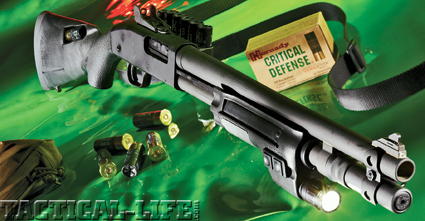 The Mossberg 590A1 is a special-purpose 12 gauge shotgun ready for CQB entry and...