by P. J. White
in Uncategorized
0

Tactical Weapons was recently in­­­­­­­­­vited to testfire the Dillon M134D Minigun at Dillon’s test range located at a remote location in Southwestern Arizona. Dillon Aero designs, develops, manufactures and supports the Dillon Aero M134D Gatling Gun (accepted into service with the U.S. Army in 2003), as well as a wide range of supporting and related products. Dillon became involved in developing a replacement feeder/de­­linker for a General Electric GAU-2 system owned by the company, after finding shortcomings in GE’s original design. Dillon’s original replacement component offering, the DAFD-2001 feeder/delinker, resulted in the rebirth of the aging GE M134 as the M134D. 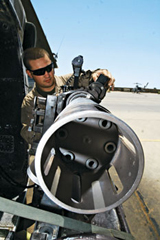 New Fire From A Veteran Dragon
The M134D owes much of its lineage to the GE 7.62mm GAU-2/M134 Minigun, no longer in production. Internally, there are significant upgrades and improvements in the M134D, resulting in a much more reliable, safer, and user-friendly weapons system.

In the M134D the internal clutch ass­embly feeds ammunition into the feeder/delinker only while the gun is being fired. Upon releasing the firing circuit, the gun continues to rotate briefly, thus expending and ejecting all ammunition remaining in the chambers. This ensures that no ammunition remains in the chambers, thereby mitigating the risk of a cook-off in a hot gun or an accidental discharge during servicing. Dillon’s innovative design also negates the need to remove five separate components, in order to ensure that the gun is clear of ammunition (as was required with the old M134 system). They achieved this with a two-piece safety sector/top cover allowing easy access to the internal components, as well as physically interrupting the mechanical firing mechanism. By simply removing these two inter-connected components, the gun is then rendered completely safe and can be easily inspected.